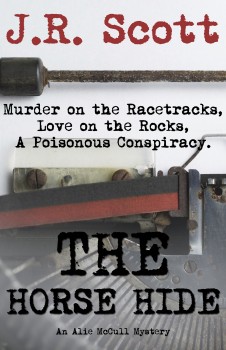 In J.R. Scott’s newest thriller, THE HORSE HIDE, murder at a racetrack draws ace reporter Alie McCull into the dark underworld of the horse business. But that’s only the start of her problems. She’s blindsided by infidelity, and the untimely appearance of an old flame serves to complicate both her personal life and her investigation. As she creeps through a labyrinth of deception and misdirection, every uncovered truth brings her closer to mortal danger.

In this Q&A with The Big Thrill, Scott talks about his inspiration for his protagonist—and explains the background behind his intriguing bio. Scroll down for the full story!

Alie McCull is an interesting protagonist. Is she based on someone you know? What brought her about and why do you keep returning to her as a protagonist?

I fashioned Alie as a character who has a little bit of all of us in her. Or how deep down the way we’d like to be; loud, brash and impatient with a world that seems unjust. But tempered with empathy for the little guy trampled on by society. Alie is not always “politically correct”—she’s not too concerned about offending people. Just because you tick someone off doesn’t mean you’re not right. As a woman, Alie has a strong sense of empowerment and equality. Using her as a recurring character is a literary tool to examine the world through a microscope. All the people under the lens are creatures just trying to make sense of events in their daily lives.

THE HORSE HIDE, with its backdrop of horse racing, reminded me of the late Dick Francis. Did his work influence you?

I must confess that I’ve never read a Dick Francis novel. I’ve always been fascinated by the old ‘50s and ‘60s hardboiled mystery novels I read as a kid, Ross MacDonald and Mickey Spillane being on the hit list. And the classic noir films that pop up on TMC every so often. The backdrop of THE HORSE HIDE came from the hours spent on tedious research that most writers do, but afterwards always gives me that pesky brain-damaged feeling.

You have an interesting bio. How have your stints as a standup comedian and working in film helped you as a novelist?

As a standup comic I painfully learned how quickly an audience will turn on you if you don’t develop the fine art of timing, editing, and storytelling—you have to be quick on your feet. As a filmmaker, I followed the same path to hone my craft. These disciplines easily translate to writing a novel. Did I mention timing?

How did you manage such an intricate plot? Do you plot ahead or are you a pantser? How much rewriting do you do? How hard was it to manage the narrative when writing from so many points of view?

So many questions at one time! So here ya go;

Plotting a novel is like a mental jigsaw puzzle with the pieces lying face down. After stumbling upon a concept I storyboard the “script”, similar to filmmaking. Concepts become chapters and chapters turn into scenes until the jigsaw puzzle pieces are flipped over one-by-one and the narrative begins to take shape.

I really do very little rewriting, but tons of editing. My writing is very personal; to me cutting even one paragraph is as painful as sawing off an arm with a dull butter knife. It can be pretty darned annoying at times.

Each of the Alie McCull books has a thread of an actual historical event tied to the story. In the 50s, Los Angeles had a contaminated horse meat scandal that went statewide. In the other three books we discuss police abuse, government conspiracies, and guilt by association.

Could you elaborate on your writing style?

Like many storytellers, I think of my prose as a combination of a word soup mixed with Lincoln Log metaphors. I try not to bore the reader with long-winded descriptions and dialogue; keep it short and sweet. And to the point. Otherwise, after one or two paragraphs people may lose interest and slip into comas.

What’s the biggest challenge in writing a thriller?

Staying current and relevant without being derivate is just one component of the challenge. How many stories have been read, regardless of the genre, that haven’t already been told a dozen times before and beaten into the ground? In the case of the four Alie McCull books I have written that take place in the 1950s, cultural realities have shifted drastically in the last sixty years. My goal is to balance the past with the present to bridge that cultural gap and try to entertain the reader at the same time. But it’s a tricky proposition; like the fat lady at the circus trying to negotiate the high wire. One misstep and the entire audience could be crushed.

What books are on your TBR pile? Who are your favorite authors and why?

I spend my reading time in an alternate dimension; non-fiction historical works (i.e., Shelby Foot’s civil war series) and biographies such as Hillenbrand’s Unbroken. As it’s been said, if we don’t study the past, we’ll be doomed to repeat it. Which we’ll probably do anyhow, hopefully with a little more finesse the second time around.

The fifth Alie McCull mystery is in the works. While each of the previous books can be read as a stand-alone, they all interconnect the life of the spunky reporter. In the fifth book, we turn the page back three years to explore the events that mold Alie’s future as a crime-busting investigator. 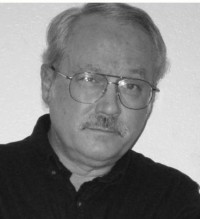 J.R. Scott grew up in St. Louis, Missouri and currently resides in Southern California. The former TV producer, independent film maker and standup comedian has written four books for die-hard mystery-thriller fans who love a pulse-pounding yarn with a roller coaster ride of tense action and suspense on a backdrop of 1950s nostalgia. Check out the Alie McCull debut book – Brain Matters is available as an E-Book or paperback on his website.

The Horse Hide, Medallion and The Witchhunt to be released later in 2015.