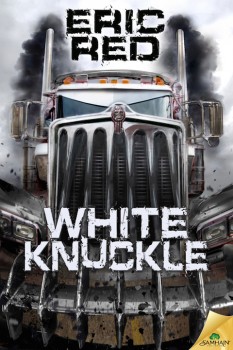 A serial killer is not just on the loose, he’s been killing for decades but laying low. Until now. When the mutilated corpses of women start cropping up along the interstate, FBI Special Agent Sharon Ormsby jumps into the investigation. Unraveling clues that the killer is a trucker prowling the nation’s highways, Ormsby goes undercover to smoke out the monster. But this fiendish killer is not only secretive, he’s diabolically clever and he soon learns that he’s being hunted. So he lays a trap with Ormsby as his prey. The story lurches from one grisly crime scene to another before accelerating into a white-knuckle ride that careens over the pages to a horrific end.

This book is so different in tone and setting than your previous title about werewolves in the Old West. What brought you to this story?

The idea for the book came when my wife and I drove across America a few years ago and saw all those countless tractor-trailers driving those thousands of miles of interstate. If one of those big rigs was a serial-killer truck driver, I wondered, how would you know, how would law enforcement track him down? There are literally millions of trucks on the U.S. highways and it would be like finding a needle in haystack. That sounded like a solid mystery idea fraught with thriller possibilities. The notion of a serial-killer interstate truck driver is relatable because we all know what it feels like to drive on the highway and that shiver of fear we feel when a tractor-trailer eighteen-wheeler hurtles by a little too close. It taps into a universal fear.

This narrative is rich in police protocol and lingo, which adds a lot to its drama. How much access did you have to the FBI and its investigative process?

A close friend of mine is a female FBI Special Agent and I discussed the idea with her and found out there is a division of the Bureau devoted to apprehending highway killers, called the Highway Serial Killer Initiative or HSK. I decided the hero of the story would be an FBI agent, since the Bureau is in charge of all interstate crime, and that’s when the story came together. The character of my agent heroine Sharon Ormbsy is based partly on my FBI friend, who’s one of the coolest people I know and was a technical advisor when I was researching the novel. When I finished the book, I showed it to her first to be sure it was technically accurate.

I have to ask, are there trucker serial killers? You made for one demented monster. Who was he modeled after, or was he composite of other killers, or did you just make him up?

White Knuckle is a fictional character and there’s never been a prolific trucker serial killer like the monster in my book that I’m aware of. There are real-life truck drivers who kill people in one state and elude detection by transporting and dumping the body in another state. Statistically, these cases generally involve one or two murders and the victims are usually truckstop prostitutes.

Another subject that you layered with great authenticity was the life and procedures of a commercial trucker. We all pass those weigh stations along the highway, but how they’re used to manage trucking is a crucial detail in your story. How did you manage this research?

I rode around with long haul truck drivers.

Do you plot out your story in advance? Basically, are you a panster or a plotter?

I’m a plotter. That’s my screenwriting background. I methodically plan a story out before I begin writing. In WHITE KNUCKLE, the narrative hinged on finding the right point where the reader went from trying to solve the mystery of finding the killer with the FBI agent, to them meeting the killer and learning his identity before the Fed does. That’s when the novel shifts gears, and feels to the reader like the hunter has now become the hunted.

Something you handled with great skill was the physical mayhem. Such choreography is easy to portray on the screen but on the page it can bog down into clumsy action. Did you act out the scenes by crawling around and over a big rig?

As a matter of fact, I did! I work hard at visualizing action scenes in every detail to write it in the most immersive, realistic, sensory way possible.

Discuss your writing process. Since you also write screenplays how do you balance your workload between that and penning novels without taxing your brain? How much rewriting do you do? Do you belong to a writers’ group and do you have beta readers?

Working on several projects at once I find keeps me from getting brain lock on any one of them. On books, I take several passes at the manuscript usually. I’m a member of a number of writing organizations and guilds, and do have a lot of author friends.

Describe your writing place. I’m seeing a room crammed with all kinds of props, collectibles, and mementoes. Or do you write at the local coffee shop?

Yes, you pictured my office pretty accurately! It has my film posters, film props, collectables, a big screen TV, and shelves overflowing with a library of books and Blu Rays. I work in a loft office in our LA condo. It’s my inner sanctum. Nice and musty.

Psycho is a top favorite of mine for its terror and suspense, but even more for its masterful manipulation of audience point of view and identification. Jaws is another movie I can watch over and over again because of how well filmed the action and tension with those three great characters on the boat with the shark is. Die Hard I’ve seen more times than I can count, and the quality of its performances, photography, and editing elevates the action movie to high art. The Road Warrior is the finest example of pure hi-octane kinetic vehicular action cinema I know of. It’s marvelous how they engineered the classic Joseph Campbell mythological hero model into the character of Mad Max. The Exorcist has an authenticity of cinematic execution pretty much unequalled in the horror genre, supporting an extraordinary horror concept. The Wild Bunch is explosive filmmaking to me, a savagely gritty evocation of the west and an involving portrayal of hard bad men. The Getaway is another favorite for its effective mix of hard-nosed love story and convincing crime chase thriller. The Warriors I’ve always loved for its surreal, exciting urban gang world. Alien stands alone in its visually immersive, viscerally frightening realization of a creature on a spaceship. It set the bar in terms of sci-fi cinema, in my opinion. The list goes on.

On the subject of favorites, what are your favorite authors and books? What are you excited to start reading?

My next novel is a Los Angeles-set superthriller, a big book with loads of action and a huge cross section of characters. It’s a lot about the city I’ve lived in most of my life. I’m also writing a sequel to my werewolf western novel The Guns of Santa Sangre called The Wolves of El Diablo for the same publisher. 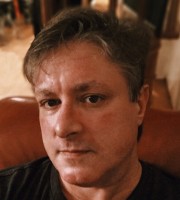 Eric Red is a Los Angeles based novelist, screenwriter and film director. His first novel, Don’t Stand So Close, is available in hardcover and trade paperback from SST Publications. His second and third novels, the werewolf western The Guns Of Santa Sangre and the sci-fi monster novel It Waits Below, are available from Samhain Publishing. Recent published short stories have been in Weird Tales Magazine, Cemetery Dance Magazine, Shroud Magazine, and the Dark Delicacies III: Haunted anthology. He created and wrote the comic series and graphic novel Containment for IDW Publishing and the comic series Wild Work for Antarctic Press. His films include The Hitcher, Near Dark, Cohen and Tate, Body Parts, Bad Moon and 100 Feet.