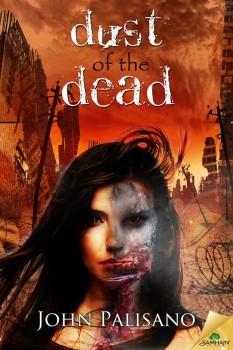 From the Dust of Zombies, a Post-post Apocalyptic Thriller Rises

Author John Palisano has fond memories of growing up in the ‘70s, especially of going to drive-in movies in a station wagon nicknamed The Bomb, and of getting a good scare out of Night of the Living Dead when his dad let him stay up late to watch it on TV. It may come as no surprise that his newest novel DUST OF THE DEAD features zombies.

Set in Los Angeles, the novel begins at the end of a zombie crisis that seems to have been contained. Humans have triumphed and life has returned to its usual routine. However, a new nightmare spawned by the dust of dead zombies desiccated by the desert sun and wind is just beginning. You might call it a post-post zombie apocalypse thriller.

As a storyteller, Palisano got his start in the movie business. After a childhood spent watching those zombie flicks, along with movies featuring killer space aliens and man-eating sharks, he studied writing at Emerson College in Boston. Then he landed a post-college internship with director Ridley Scott that led to working on several big budget films. He also wrote three screenplays that were optioned, but eventually turned his storytelling skills to fiction.

Recently, he answered a few questions about writing—and zombies, of course—for The Big Thrill.

Your new novel DUST OF THE DEAD features zombies. Why do you think popular culture continues to have a love affair with zombies? Does the fight against zombies bring out the best in humans or make us more inhuman?

Zombies literally come back from the dead again and again, with each generation using them in their own way. In the ‘70s, zombies were stand-ins for consumers and how that led to an empty life, like in Dawn of the Dead. In the ‘80s zombies were made from shallow party animals like in Return of the Living Dead. They came back again in the ‘90s and ‘00s in reflection to terrorists and as an existential fear in films like 28 Days Later. As we are seeing, time and again, it’s the real human reactions to these events that separates the great from the not so great stories. It’s the same with any premise. Any story can be told well, or told poorly. It boils down to characters you care about, and who you can see yourself being, or wanting to be like. Of course, the best current example of that is The Walking Dead.

Post-apocalyptic stories bring people down to their basics. Consumerism is stripped away. Fame and fortune are irrelevant. It’s all about the basics! Seriously: I think that’s what attracts so many people to these stories. It’s not about what you own or how powerful you are inside a company, but how you are when the chips are down. Some thrive in those conditions, while others fall apart without the creature comforts of civilization.

You describe this great experience of going to drive-in movies as a kid in Connecticut, and how it was a family outing in the station wagon. The kids played on swing sets up front while watching the movie. Sadly, drive-ins really don’t exist anymore. Is there something to be said for movie-going as a communal experience?

I used to believe in that, but lately? Going to the movies is a horrendous experience. And it’s not just my age. Or maybe it is? The last movie I went to, people were on their phones the whole time. People were talking. No one seemed to care that they’d paid $20 each. I hated it. This was at a theater famous for people being respectful and they’re supposed to be tough on that sort of behavior. Not so, in my eyes. It’s much more pleasurable to watch a movie at home on our widescreens, blurays, and Netflix, you know? Although Star Wars may get me out to the theater once it’s out for a few weeks.

Scary movies for you growing up were Night of the Living Dead, Alien, and Jaws. They made quite an impression and kept you up at night—or out of the water! Are there any more recent movies that have had this kind of scare factor for you?

Unfortunately, nothing in modern cinema has been that scary. We’re in an era of repulsion vs. suspense. Honestly? The things I’ve found the most frightening have been long-form television shows. The Walking Dead stresses me out tremendously, believe it or not. You just never know. And that storytelling has always scared me. Hannibal is really creepy. Penny Dreadful. True Detective freaked me out. Of course, Game of Thrones has had some genuinely fantastic and unforgettable moments. I think that’s really where the future lies. Viewers become so much more invested in characters over a long haul. It’s more frightening. In two hours in an old-fashioned film, there’s less time to really build the character bonds you get with long-form television.

You spent some time working in the film business, then writing scripts that were optioned, and even making short films. What a great background for a fiction writer! Considering that filmmakers and writers are both storytellers, how is storytelling as a writer different?

You learn what makes a good story, and learn how to keep things going forward. It’s very unforgiving of any bloat. Theoretically! In the end? There are many elements that are the same, regardless of format. Great dialogue. Great set pieces. Those are just as integral in books as in films or TV. Being around millions of words, and reading them constantly simply just bangs grammar and syntax into your head. The one big thing that’s absent in scripts, usually, is voice. That’s the main difference in how a story is told between script and fiction. In movies, that voice comes in through the actors, director, and other creative collaborators. In books, it’s all the author’s voice.

You’ve produced a few book trailers for your own books and for other writers. Is that fun? How important is it for writers to be making book trailers or videos to share on their own websites or on YouTube?

A good book trailer is about a minute, gets to the point, and doesn’t try and tell you every single plot point. It’s a tease. You want them to make people want to read your book. A bad book trailer can make people NOT want to read your book, believe it or not. So make sure it’s professional. The best way to do so is to simplify and watch others that work, and emulate them in structure, but be sure to highlight what makes your book special. Do they help? Hard to say. I think anything we can do to spread the word about books is great. Even if it’s just ten more people, well, every single reader is important. You or I could be one of those readers, and if we like what we read, we’ll spread the word, and likely buy your next release, too. Hopefully.

Tell us a little about your writing process. Do you outline? Do you have a dedicated writing space?

I certainly outline, but they are usually pretty spare. By now, I’m pretty much familiar with three-act structure, as well as the individual beats. It helps me to have some sort of an action plan. I usually hit most of the beats, but of course, listening to the story can shift the route. Sometimes you need to take an alternate path to get where you’re going, but the benefit is that’s often where there are some great out of the way gems you’d never see if you stuck strictly to the map.

I wish I had a dedicated writing space these days. At the moment, I do most of the first draft writing on my iPhone with Google Docs. Each morning, I wake up early and write for about half an hour. I usually do a page or two, single-spaced. If my day is nuts and I never get back to it, at least I was semi-productive. I do try and do more writing later at night, although that slot is usually reserved for editing these days. I’m also a serial software fiend! I try all sorts of writing programs on the mobile platforms, as well as the Mac desktop. No matter what, though? I’ve learned to bring everything into MS Word for a final format and check, as that’s the industry standard, and there are certainly quirks. Not doing so has bit me in the butt a few times!

Talk about crave: I’d really love my own office with shelves for my books and a dedicated reading chair and workspace. One day!

Your previous novel was Nerves, featuring a main character who can shoot nerve tendrils out of his fingertips to use as weapons. The opening scene where the character gets even with a witch is, shall we say, nerve-wracking. It’s got to be challenging to come up with such creative characters in the horror-verse. How do you go about doing that?

Those characters and traits just happen to be the way my mind works. I’m a very curious person. I like to know how engines work. I question things very often, and I believe that makes my point of view shift. In all honesty? So much of my work begins within horrible dreams. I suffered from nightmares for ages, and still do. I found early on that writing about them exorcised them instead of paralyzing me. That’s not so much a factor as I age, but I still have very vivid and disturbing dreams. Nerves began that way, with my trying to eat a plate of food in a dream, and not having silverware, and the food began to crawl away, and my fingertips split open, my nerves came out, and speared them. Sick! I woke up thinking it was real and knew immediately I had to work out a story around it.

The amount of world building put into some short stories is almost as much as a novel for me. That’s tough, time-wise. But I love the form. I don’t think a short story is necessarily part of a bigger show, somehow. The best of them, to me, have their own beginnings, middles, and ends, and character arcs. And, full circle: a character with drive and passion, even and especially if flawed, is paramount to telling a great short story. Caveat: there are countless examples of this not being the case, of course. But generally a self-contained story needs to be present in both a short piece, a novella length piece, or a novel. 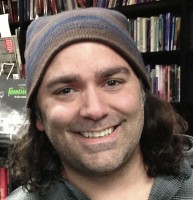