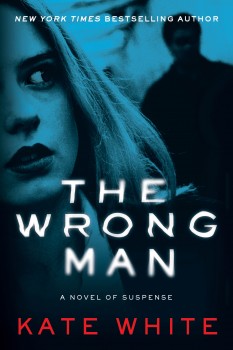 Milestones are important for any writer but New York Times bestselling author Kate White is coming up to a special one. The publication of her latest novel, THE WRONG MAN, will be her tenth. I had the privilege of reading an advance copy, and thoroughly enjoyed this gripping contemporary suspense.

It has such a smart premise. Owner of a Manhattan interior design firm, hard-working heroine Kit Finn decides to act on impulse while on vacation in the Florida Keys. That impulse involves a very attractive man with whom she believes she forms a mutual connection, and who wants to meet up again back in New York. When the man’s apartment door is opened by a complete stranger sharing the man’s name, Kit is shocked. Unsure if it’s a cruel joke or identity theft, she quickly realizes that it’s part of something deeper and deadlier than she could have ever imagined. And where she thought acting on an attraction was a risk, now everything’s on the line—her business, the people she loves, and even her own life. Mr. X is key to it all, but she has to find him first.

THE WRONG MAN has plot swerve upon plot swerve, and builds tension with a palpable sense of danger. It really keeps the reader guessing, right up to the climactic finish. White says that she finds it easier to create red herrings if she knows the end. “I know there are many terrific mystery and thriller writers who don’t plot out their books but I HAVE to plot in advance—though it’s always a fairly rough outline. I always know who the killer is (and why), and I also come up with certain twists in advance.”

She doesn’t overly restrict her plotting, using outline notes for about five chapters at a time. She also writes down questions regarding the plot. “It’s a technique I heard someone talk about once and it works brilliantly,” she says. “These surprising answers come out of the blue, which makes the process really fun.”

I would love to be able to say something about the men in the book, but that’s off limits as I would be straying straight into spoiler territory, but I could ask White about her heroine, Kit. Kit owns a boutique interior design business, and White clearly enjoyed portraying her career choice. I wondered if that was something that White drew on from her previous professional life as Editor-in-Chief of Cosmopolitan, a position she held for fourteen years.

“For my Bailey Weggins mystery series, I made Bailey a crime writer for a magazine, which was easy for me to do as a magazine editor. But as I started writing stand-alones, I had to come up with different professions for the female protagonists. For the first couple of books, I kept it close to home. For instance, in The Sixes the character is a celebrity biographer.”

She decided to make a change for THE WRONG MAN. “I had to get a bit away from all that. I chose interior design because I’m friends with a few decorators and they were nice enough to work with me, plus I knew it would be a hoot to research the field. I don’t have any knack for decorating but I know a great room when I see it at least.”

Being at the helm of such a high-profile and successful publication as Cosmopolitan would have brought its own professional challenges, and White has had to adapt to a very different pace with novel writing. It wasn’t a big bang approach—when she decided to leave the magazine, she gave her boss two years notice, which then stretched into three because he wanted a little more time to think about a replacement. And during the years she was at the magazine, she always wrote in a solitary way on Saturday and Sunday mornings.

But there was of course a major shift for her to get used to in becoming a work-from-home author. “One day I looked out my home office window in Manhattan and there was red tailed hawk eating a pigeon and all I could think was ‘Wow, I’m not at Cosmo anymore.’ There are no more dinners with people like Chris Pine or Rihanna and no more half-dressed male models running around, just my husband in his boxers.” That’s some change, yet a change she has come to relish. “I absolutely love the freedom and the pleasure of being able to write whenever I want. Though I enjoyed being part of a wonderful corporation, I’m really more of an outdoor cat than a corporate citizen.”

White uses some of her corporate citizenship experience in her highly successful non-fiction career books, I Shouldn’t Be Telling You This: How to Ask for the Money, Snag the Promotion, and Create the Career You Deserve, and Why Good Girls Don’t Get Ahead but Gutsy Girls Do. But it’s her latest non-fiction title, which she has edited, that of course caught my interest, The Mystery Writers of America Cookbook. For any of us who are friends with writers on Facebook, we all know the photos of motivational snacks and consolation chocolate that pop up regularly. So what is it about writers and food?

As a self-confessed food nut, White agrees that there’s something in the ether. When MWA approached her and asked her to edit their cookbook, she eagerly accepted. As she got further into the process, it struck her how much food defines some of our favorite characters—from Miss Marple with her tea and scones to Jack Reacher with his endless cups of coffee. All proceeds from the book go to MWA and White hugely enjoyed the project. “I loved having the chance to communicate with so many mystery authors. Even a no from P.D. James was a rush.”

The next rush of course will be publication day for THE WRONG MAN. While moving into double figures is definitely a cause for celebration for White, she’s a great deal calmer about release day than she was with her first novels, as she feels she has “mellowed a bit!” She admits to keeping her excitement about her early publications under wraps, lest she appeared immodest.

With hindsight, maybe she would have celebrated a little differently. “Now I regret not running down Second Avenue screaming ‘I’m an author, I’m an author,’ and really relishing it. I would advise any new author to savor every second!”

That advice, like Kate White herself, is well worth following. 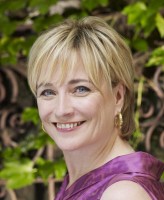 Kate White, the former editor-in-chief of Cosmopolitan, is the New York Times bestselling author of six Bailey Weggins mysteries and three previous novels of suspense: Hush, The Sixes, and Eyes on You. She is also the editor of the Mystery Writers of America Cookbook.

To learn more about Kate, please visit her website.