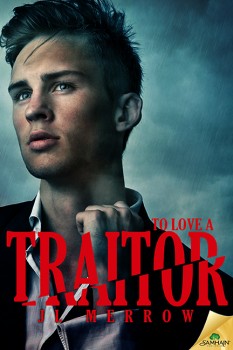 Award-winning author JL Merrow describes herself as a rare beast, an English person who refuses to drink tea. But that’s not all that identifies her. She is also a prolific author. Case in point, TO LOVE A TRAITOR is her thirteenth novel, and she has also written seven novellas and more than fifty short stories. So, while she may eschew the art of drinking tea, her prolific writings clearly demonstrate her embrace of the authorial arts—much to the delight of her fans! She writes gay romance, mostly contemporary romantic comedies and mysteries, with an occasional foray into historical and speculative fiction. Ms. Merrow attributes her alternating between genres to having a short attention span, but anyone who can write that many books and short stories, and has garnered awards and nominations for multiple titles, does not suffer from that particular condition.

TO LOVE A TRAITOR falls into her historical category. Set in England shortly after World War One, Roger Cottingham is faced with a dilemma. He suspects Matthew Connaught spied for the Germans during the war, and that his actions led to his brother’s death during a patrol into no-man’s land. Though Roger worked in Naval intelligence during the war as a cryptographer, he’s certainly not trained to investigate a potentially dangerous traitor. Despite the risks, he is determined to uncover the truth, but what he doesn’t count on is falling in love with the very person he’s investigating. What is he to do if, as the mounting evidence suggests, he finds Matthew guilty? Is he TO LOVE A TRAITOR, or see that Matthew is punished for acts leading to his beloved brother’s death?

JL Merrow was kind enough to answer some questions for The Big Thrill.

I’m sure you’ve had to field this question before, but could you tell us why, as a woman, you tend to write stories with male protagonists?

Honestly? I just feel more comfortable writing about men, particularly for longer works. I think I find it easier to be objective about male characters—women in our society are basically taught to judge themselves against one another (as I’m sure men are too) so when I’m writing about a man and his motivations, I find I have a lot fewer hang-ups!

That’s one reason. The other is sadly commercial: writing is how I make my living, and I just don’t think I’d sell as many books if my main characters were female. Writing as I do primarily for the romance market, my readership is predominantly women and gay men, and they like their heroes to be someone they could see themselves falling in love with.

However, I almost always have prominent female side characters, and I’ve been praised for how three-dimensional they are. There are quite a few women in TO LOVE A TRAITOR, but my personal favourite is ex-spy Sheila Pendleton.

On your website and other places you brand yourself as a writer of contemporary romance and paranormal. What is it that draws you to write historical suspense novels?

When I was predominantly a short story writer, I tried on quite a few genres for fit, including science fiction and historical, but I find it’s my contemporary mysteries and romantic comedies that are most popular with readers. So writing a historical suspense novel was really a bit of self-indulgence for me! I’ve always enjoyed reading old-fashioned novels—growing up, Ann Radcliffe (The Mysteries of Udolpho, etc.) was one of my favourite authors—and I love historical adventures that really get the flavour of the period.

Could you tell us about your typical writing day? Any quirky writing rituals?

Like a cat, I am most active at dawn and dusk. Well, not actual dawn, obviously, because the sun tends to get up WAY too early for any sensible person. And by dusk I really mean after I’ve had my dinner, and preferably with a glass of wine by the keyboard. But mornings, yes, and evenings are my most productive times. Afternoons are really one long lunch break for my muse.

Rituals? Does procrastinatory reading of Facebook that verges on the obsessive count?

What was your life before writing, and what led you writing novels?

What was my life before writing? Well, I do wonder what I did with myself all day! Actually, I’m a chartered accountant and chartered tax advisor and used to work in that field before taking a career break to raise the young ‘uns. Writing is my excuse not to go back to having a proper job…

TO LOVE A TRAITOR takes place shortly after World War One. What inspired you to write about this time period?

There’s just something about the 1920s that keeps drawing me back! Now, of course, 1920 isn’t precisely the 1920s as we think of them, just as the swinging 60s didn’t really start until mid-way through the decade (or so I’m told, by people who clearly weren’t there). I love the fashions—so elegant, and yet so free—and the slang, and the music. And there’s the poignancy of knowing what most of the people living in that time didn’t—that while just out of one dreadful war, they were soon to be involved in another.

And along the same historical line, what kind of research did you do? And what I found delightful reading your book is all the period slang. How did you research the use of this language?

I didn’t precisely research language. What I did do was read a vast quantity of novels written during the period in question—which wasn’t any hardship, given how much I love the era! I also read non-fiction sources of the time, such as local and national newspapers and magazines, and a lot of exciting stuff about spying in WW1. Plus, as my hero George was a conscientious objector, books on that subject, which left me with a strong sense of how courageous many COs were.

What can you tell us about TO LOVE A TRAITOR that’s not in the synopsis?

The weather in it is one hundred percent accurate for December 1920—early London snow, Scandinavian anticyclones, mild Christmas and all. Yes, I am British. Why do you ask?

What book is on your bedside table?

I have lovingly embraced the digital revolution, so my bedside table holds my e-reader, plus a seven-inch tablet in case of emergencies. And my phone, loaded with three e-book apps, because one can never be too careful. I have seen a vision of hell, and it’s an endless library with empty shelves…

Oh, you mean what am I actually reading? Well, right now it’s The Children Act by Ian McEwan, and next up is classic gay mystery The Bottle Ghosts by Dorien Grey.

What writers have inspired you? And what’s the best advice you’ve received about writing?

The late, great Sir Terry Pratchett is the influence I cite most often—he was a master of comic timing. Also PG Wodehouse for the funny stuff and, when I’m writing mysteries, Agatha Christie and Dorothy L Sayers.

I have another couple of novels due out in early 2016, although both are romantic comedies rather than thrillers, and I’m currently working on a short story in the world of my Plumber’s Mate mysteries, featuring slightly-psychic plumber Tom Paretski and his private investigator boyfriend Phil. After that, hopefully the next novel for them. 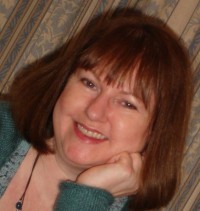 She writes across genres, with a preference for contemporary gay romance and mysteries, and is frequently accused of humour. Her novel Slam! was a 2013 Rainbow Award winner and her novel Relief Valve was a finalist in the mystery category of the 2015 EPIC Awards.

JL Merrow is a member of the UK GLBTQ Fiction Meet organising team.