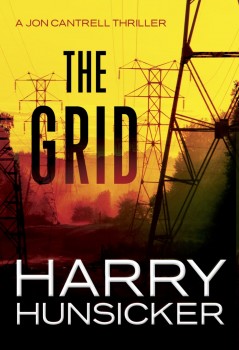 Harry Hunsicker’s third book in the Jon Cantrell thriller series could be described in many ways as a twenty-first century Western. For starters, THE GRID is set in Texas. Cantrell is a lawman but also a drifter, having found employment as a rural county sheriff after a prickly history as a DEA contractor. He wears boots and carries a gold-plated star. Instead of a violent death in a saloon brothel, he is soon investigating a killer who knocks off cheating husbands looking for hookups online.

Cantrell’s challenges don’t end there. However, in THE GRID, it’s not a cattle rustler or a train robber who rides into town, but rather a terrorist that is attacking power-generating stations.

It’s all in a day’s work for a lawman in the New West, and Cantrell is more than up to the task. He’s savvy, tough, and has a lot of compassion—but he’s definitely got a burr under his saddle. He’s always ready with a quick-draw quip: “Not counting the power plant, I figured the town’s three biggest industries were food stamps, bass fishing, and diabetes.”

This lawman is also something of a philosopher: “On some level we all live in a special world filled with mirrors that flatter the image of how we’d like things to be.” Well said, Cantrell.

Percentage-wise, how much of Jon Cantrell is you?

I’m joking. I think the actual percentage is much higher, at least in terms of personality, maybe thirty to forty percent. Neither Jon nor myself like to see the bad guys win, but we both have a certain pragmatic outlook on life. Sometimes the bad guys do triumph, and the best you can do is just keep going, hoping to fight another day. Physically and career-wise, we’re pretty different. Jon has a military background while I’m allergic to camouflage and taking orders. Jon is younger than I am, too.

Do you think terrorism targeting the power system as portrayed in THE GRID is a real-life cause for concern?

Yes. The nation’s power grid is woefully under protected, both from physical attack, which is what happens in THE GRID, and in terms of a malicious software intrusion, which I barely touched on. That’s the bad news. The good news is the power grid is very robust, at least physically—an enormous spider web providing a lot of redundancy. If a single plant goes offline, in the short term, there’s enough capacity to take up the slack. Google “power grid map” and see what I mean.

The details of criminal investigation and the power grid have so much realism. What kind of research did you do?

I was fortunate enough to arrange a tour of a 1,200-megawatt power plant, which was an incredible experience. The plant produces enough electricity to power about 600,000 homes. At the heart, the process is very simple: heat some water, turn some turbines, create electricity. But the scale of everything was immense. The boilers were ten or twelve stories high. The amount of fuel, in this case coal, needed for the boilers was massive. The crime itself, shooting out transformers, is based on a real case in Northern California. In April 2013, six people attacked a substation near San Jose, firing hundreds of rounds at specific transformers, causing widespread power outages. The attackers had previously cut the communication lines to the substation so that the rest of the grid wouldn’t get the message to generate more energy. In other words, the attackers knew their stuff. The authorities never found who was responsible.

What’s your next writing project? For example, are there more Jon Cantrell adventures on the horizon?

After three books, Jon Cantrell is taking a break. I’m working on a new crime thriller about an ex-Texas Ranger who lost his entire family in a tornado, and now drifts from town to town.

Recently at Thrillerfest there was an interesting roundtable discussion on “breaking the rules in writing,” which addressed topics such as changing points of view. THE GRID is told in first person and third person, in alternating chapters. Why did you decide to take such a bold approach?

Using two different points of view allows for a richer story-telling experience.  Multiple points of view lets the reader see the same events from different lenses, if nothing else. With THE GRID, I wanted to include the point of view of Jon’s antagonist, a deeply disturbed woman named Sarah.

Tell us a little about your writing process. Do you outline your story or do you take a more organic approach?

I like to work from a short outline. I need to know the ending at least. The organic approach doesn’t work well for me with novels.  I prefer it for short stories, however.

Can you share a bit about your writing habits and workspace? Do you have a dedicated writing space? On a typical day, what would your writing schedule look like?

I have a large garage apartment that I converted into a home theater. The room only has one window, opposite the screen, and that’s where my writing desk is.  The desk itself has nothing on it but a monitor, a mouse, and a keyboard. I’ve found that keeping my work area free from clutter is best. I write in the mornings, usually for two to three hours. Afternoons and evenings, if time permits, are for editing.

How many pairs of cowboy boots do you own?

FruedOnLine says I shouldn’t answer that.  But I will anyway. Six. 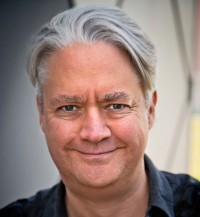 Harry Hunsicker is the former executive vice president of the Mystery Writers of America. His debut novel, Still River, was nominated for a Shamus Award by the Private Eye Writers of America, and his short story “Iced” was short-listed for a Thriller Award by the International Thriller Writers. Hunsicker lives in Dallas. The Grid is his sixth novel.