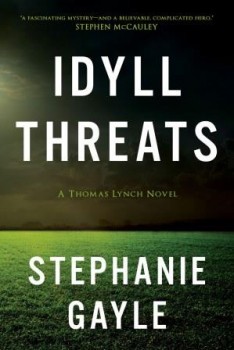 The voice that came first: “World weary, and sad, but also sharply funny.” This is the beginning of Stephanie Gayle’s novel IDYLL THREATS.

The voice belongs to the main character, Thomas Lynch, a former New York City policeman who is the new Chief of Police for the town of Idyll. He brings baggage to his new position—baggage that affects his ability to do his job.

Lynch’s journey toward peace is played out against the murder of a young girl, Cecilia North, who is found shot to death at the local golf course. On the surface it should be a slam dunk for the Idyll police department, but just hours before her death, Lynch found Cecilia and an older man seeking privacy for sex in an old cabin. Normally, this wouldn’t be a problem for Lynch, except he was at that cabin for the same reason.

With the discovery of the dead girl, Lynch is left wondering whether the man recognized him and how to steer his detectives toward the cabin and the man Cecilia was with without revealing his own secret—he’s gay.

Not trusting his detectives with his secret, Lynch is forced to seek help from unlikely sources including a Goth teen and a UFO-conspiracy theorist while contending with pressure from the mayor to solve the crime before the town’s premier tourist event takes place. On a daily basis Lynch must cope with the suspicions of his men, casual homophobia, and difficult memories of his partner’s recent death.

It all makes Lynch realize Idyll, Connecticut, is not safe, especially for a man who holds secrets that threaten the thing he loves the most—his job.

To bring IDYLL THREATS to life, Gayle had to create the town of Idyll. “I’d planned to use a town that exists in Connecticut called Naugatuck. Many things about it were right for the novel. But the police force was too large, so I wound up creating Idyll. My first novel was set in Macon, Georgia. So I’ve had the experience of creating a town and using a real place. I worry less about my fictional town. No one can tell me that I got a detail about it wrong because I invented it.

“It isn’t based on a real place, but it is informed by the small town I grew up in (East Bridgewater, Massachusetts). Geographically, Idyll is near where Tolland, Connecticut, is located. I like to think I created Idyll one scene at a time. There’s certainly more of Idyll to explore.”

Besides the creation of Idyll, Gayle also created her main character trait by trait, building on that sad and world-weary voice. She took time to carefully select the right name. “For a major character, such as Thomas, I’ll look into name origins before I choose one. I wanted a name that would be appropriate for an Irish cop. Thomas is good because it has multiple nickname variants. And nicknames are a great way of signaling intimacy or distance between characters.”

“I researched so many other things from fiber evidence to step-by step autopsy procedures to police exams. I’m sure only about a third of the research made it into the book, but that’s good. You never want the reader to feel you’re lecturing them about everything you’ve learned.”

IDYLL THREATS is the second novel Gayle successfully crafted while working fulltime in the finance department at MIT’s Media Lab. According to an interview on BellaOnline.com, Gayle writes over her lunch hour and in the evening. On weekends, she writes first thing in the morning and other times through the day, depending on her schedule.

Gayle is a blogger. It grew “out of Grub Street’s Novel incubator program, an intensive one-year program for ten novelists in which you undo and redo your novel, twice. It was a marvelous education. After the program, some alumni created a blog site, Dead Darlings, where we natter on about topics related to writing and publishing.”

When not writing, Gayle loves to bake. In the past year she has been working on her sourdough bread and has discovered soufflés are not that difficult and “have an undeservedly bad reputation.”

Movies are a part of Gayle’s non-writing time. Two of her favorite movies are Jaws and Milo & Otis. “There are some beautiful shots [in Jaws], like where Brody is paging through the book on sharks and you see the pages via the reflection in his glasses. Plus Quint’s speech about the sinking of the Indianapolis—amazing. For contrast, Milo & Otis is a Japanese film about a cat and dog who get caught up in some adventures. It’s sweet and funny.”

On her TBR pile, she is looking forward to reading Dante’s Dilemma, Bad Feminist, The Fever, The Wasp Factory, The Memory Garden, and The Girl with All the Gifts.

That world weary, sad, and sharply funny voice of Thomas Lynch has seduced Gayle into writing a sequel to IDYLL THREATS. She also has another mystery on the back burner about a highly educated house cleaner.

What does she want the readers of The Big Thrill to know about her and IDYLL THREATS? “I’m saner than my browsing history would lead you to believe.” 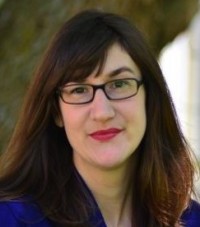 Stephanie Gayle (Arlington, MA) is the author of My Summer of Southern Discomfort, which was chosen as one of Redbook’s Top Ten Summer Reads and was a Book Sense monthly pick. Gayle has also published stories and narrative nonfiction pieces, including two Pushcart Prize nominees.

You can learn more about Stephanie Gayle and IDYLL THREATS by visiting her website.