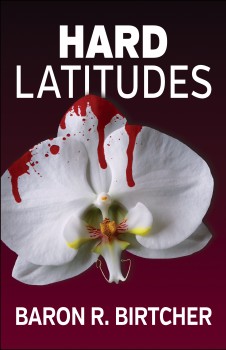 Many writers have hidden (or not so hidden) “other” lives. There are times you read an authors’ website and think, “Oh! How interesting, I wonder what that’s about?” In Baron Birtcher’s case, my curiosity related to his interest in music: I mean, not many authors can have founded an independent record label. Normally, unless you’re brave enough to mail the person concerned (and they have the time to respond), you don’t get the chance to have that inquisitiveness rewarded. One of the true delights of conducting interviews for The Big Thrill is having licence to be nosey.

Baron, ever since reading your website, I’ve been humming “Ruby Tuesday” to myself. I can remember the original Rolling Stones track coming out—are you a fan of the band?

I am a fan. In fact, I always have a sort of “soundtrack” playing while I am writing. I endeavor to have my books take on the “flavor” of the tunes as I go along. The Stones’ “Can’t You Hear Me Knocking” was a staple for me as I wrote my second Mike Travis thriller, Ruby Tuesday. Of course, the Doors music was prominent for the first one, Roadhouse Blues; very early Stephen Stills tunes and some Eagles cropped up in Rain Dogs. Pink Floyd sort of crept into HARD LATITUDES.

You’re clearly a bit of a rocker. Can you tell readers a bit about your music career?

I began my creative career as a guitarist, songwriter, and singer. Had a band that did fairly well, but came to the realization that I was probably better suited for the “business” side of the music industry. I founded an independent record label, sold it, and am now an artist manager and executive producer for several musical acts when I’m not writing. I have always believed that there is a significant crossover between the reading of engaging prose, and the experience of listening to great music. There should be rhythm to the words, and an overall “tone” or “vibe” that a finished novel should contain—much like one’s favorite music. Both mediums of entertainment should, in my opinion, take you somewhere.

Why did you turn from making music to writing crime?

As a long-time reader, I had always harbored the desire to tackle the writing of a novel. In 2000, I had the opportunity to take a little time off and explore that; to scratch that itch, if you will. Crime fiction was and remains my favorite genre, so I just went for it, and wrote the story that had been bubbling in my head for years. That book became the first Mike Travis thriller, Roadhouse Blues, and has both Jim Morrison and the Doors as major components of the plot. I got extremely lucky with it, and it landed on the Los Angeles Times bestseller list, among a number of others, and got some attention from the film world. After that, I knew I was hooked. Writing is my first love, without a doubt.

Roadhouse Blues was the first book in the series. Were you always intending to follow that up or did Mike’s story grow in the telling?

My “plan” (such as it was) was to create a series, but sometimes you don’t know whether a character is going to be the type that is going to be conducive to a series. As it turned out, Mike Travis fascinated me—and, fortunately, readers as well—and the series grew into Ruby Tuesday, then Angels Fall, and now HARD LATITUDES. I wrote a stand-alone called Rain Dogs in between the third and fourth Travis books, but even that book has significant connections to HARD LATITUDES. Truth is, all of my books interlace. I am working on the next Travis book as we speak.

Mike Travis is described as hard-boiled, but there’s more to him than that. Can you tell us what makes the man tick?

Yes, there is a lot more to him than that. Mike Travis is definitely hard-boiled in that he is tough, decisive in his actions—often violent—and does not suffer fools. By the same token, his life’s desire was to escape the brutality of the LA streets (where he served as an LA cop, and eventually a detective in sex crimes and homicide) and live a life with some measure of peace. To that end, he builds a boat to live on, and sails it to the tropics. But it doesn’t take long for Mike to find out that you can’t run from who you are, and even in the palm-lined tropics, there is a dark side that needs to be eradicated. Mike does not hesitate to do exactly that, “with extreme prejudice” as they say in Apocalypse Now.

Your depiction of Macau is extremely atmospheric. Have you ever been there? If not, how did you achieve the authentic touch?

I have been there a few times, actually. The entirety of the Hong Kong/Macau/Kowloon region seems mysterious and exotic—rather noir—to me. The teeming streets, the neon lights, the sounds, smells and humidity of the tropics. Every time I visited there, I felt as though anything could happen at any time. There is this sense of impending chaos that appealed to me as an author, and I promised myself that I would set a story there some day. I finally did!

In the book, there’s a scene in a garage where Mike in admiring a collection of fabulous cars. (Well, they got me excited.) Does that reflect a writer’s eye for automobiles or your own passion? If yours, which car would you have chosen from that collection?

I loved researching that scene! I am kind of a car guy myself, and it was terrific to imagine what kind of collection I would put together if I had virtually unlimited resources (like the character in the book). My choice? Hands down: Dashiell Hammett’s Duesenberg. No question.

I’m a great fan of film noir. Would Mike find himself at home on celluloid? If so, who would you have to play him and the other characters in HARD LATITUDES? (You’re allowed to cast from the great pantheon of film stars now gone to the great cinema in the sky.)

I am a huge fan of film noir, as well. Not only visually, but tonally. In fact, I like to think of the Travis series as a sort of “Tropical Noir” that captures the heat, the sweat, the blood, and the darker side of paradise. As for casting, whew! I always avoid that one because I think it best to leave the reader to “see” the characters that they imagine them. (Having said that, however, I will admit that I had an Escape From New York–era Kurt Russell in my head when I wrote the first Travis book). Travis has metamorphosed, though, and there are a handful of contemporary tough-but-tender actors who I believe could properly capture his spirit. Vague enough? Sorry for the cop-out, but hey…

Baron R. Birtcher spent a number of years as a professional musician, and founded an independent record label and management company. Critics have hailed his writing as “The real deal” (Publishers Weekly) and his plots as “Taut, gritty and powerfully controlled” (Kirkus Reviews). His first two Mike Travis novels, Roadhouse Blues and Ruby Tuesday were Los Angeles Times and IMBA bestsellers. Angels Fall, the third installment of the acclaimed series, was nominated for the “Lefty” Award by Left Coast Crime. Rain Dogs, his first stand-alone, was nominated for both the Claymore and Silver Falchion Awards.

To learn more about Baron, please visit his website.