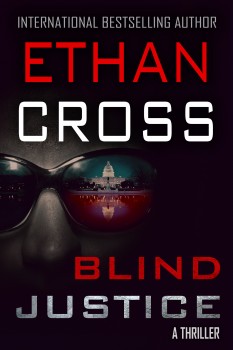 Ethan Cross burst onto the scene in 2011 with his blockbuster debut, The Shepherd, which rocketed its way to national and international bestseller status. Now, after further success with a prequel novella and two full-length sequels starring serial-killer-hunting investigator Marcus Williams, the secretive Shepherd Organization, and show-stealing antagonist Francis Ackerman, Jr., Cross has set his sights on a new series, one with a unique protagonist and a compelling world. The author sat down with The Big Thrill to discuss his newest surefire hit, BLIND JUSTICE, starring an investigator who sees the clues and connections others don’t despite not seeing what most of us do.

I am the International Bestselling Author of The Shepherd, The Prophet, The Cage, Father of Fear, and Callsign: Knight. Bestselling author Jon Land described The Prophet as “the best book of its kind since Thomas Harris retired Hannibal Lecter,” while Andrew Gross (#1 New York Times bestselling author of Reckless and Don’t Look Twice) called The Shepherd “a fast-paced, all-too-real thriller with a villain right out of James Patterson and Criminal Minds.”  The Shepherd recently spent nineteen weeks in the Top 5 on the German Der Spiegel list and has been published in around 20 different languages. I live and write in a small town in rural Illinois with my wife, two daughters, one son, and two Shih Tzus.

Tell us about your new book, BLIND JUSTICE.

Deacon Munroe is not your average investigator. He’s intelligent, cultured, well-connected. And totally blind. With BLIND JUSTICE, I wanted to create a story featuring an investigator with the brilliance of Lincoln Rhyme being paired with a soldier with the determination and strength of Jack Reacher. And page one kicks off with the murder of the Commandant of the Marine Corps.

What was your initial inspiration for BLIND JUSTICE? How did the story’s premise develop through the early days of your writing process?

A lot of the initial inspiration came from my daughter, Calissa.  She has special needs, and her unique challenges have opened my eyes to the struggles of people with disabilities.  So at this time, I was also looking to develop a unique new series.  So I started thinking about different disabilities, including blindness.  Becoming blind has always been a fear of mine.  I guess because I’m a very visual person.  I also thought that it would be an interesting world to explore from a writing standpoint.  So I started thinking about a blind detective, but I wanted him to explore a different niche or realm of investigation, not just something like PI or FBI.  And in came the idea for a blind investigator within the Defense Criminal Investigative Service being called upon to handle the biggest cases and scandals in the world of the US military.

What sort of challenges did you encounter in researching and writing a blind protagonist?

Deacon Munroe is one of the main point-of-view characters in the book, which means that I can only describe the novel’s world as he “sees” it. This meant that I had to think of every scene and every interaction not as I would from the standpoint of a sighted person but from that of someone who is blind. That created some challenging but interesting obstacles.

How did you research locations, subjects, and other elements for BLIND JUSTICE? Any interesting stories there?

While researching this book, I spent time in Washington, D.C., doing things like getting a private tour of the Pentagon, riding the Senate’s private train, exploring the basement of the U.S. Capitol Building, and stealing behind-the-scenes looks at the Old Post Office Pavilion (including sneaking into some places I was probably not supposed to go).

How much of yourself do you put in your characters? With which character in BLIND JUSTICE do you most identify?

Obviously all of the characters a writer creates (or at least all of those he or she writes well) come from inside of them and reflect a part of the writer’s personality and/or their emotional experiences. That being said, I don’t think that there’s any one character in this book who I think takes after me in any way. They’re much more interesting than me.

Deacon Munroe is the obvious choice, since he’s a blind investigator descended from Southern aristocracy with his finger on the pulse of the world of the DOD.  But I also really enjoyed writing Jonas Black, who takes over when brawn is called for over brains.  But that doesn’t mean he’s just a macho thug.  There’s much more to Black than meets the eye.

This is your first book after a successful trilogy (and prequel) of your Shepherd books. How was writing this book different from writing your previous series?

This book was different from the standpoint that I was able to take on threats of a much grander scale. It’s a little less “dark” with a bit more action than my Shepherd series.

I’m an obsessive outliner. For The Prophet (the second book in the Shepherd series), I wrote a 170-page outline that went through two major drafts with feedback from my editors. This outline contains pretty much everything that’s going to happen in the book, even thoughts, research, and snippets of dialogue.

But for me, that’s the hard part.  Once that’s done and the “writing” begins, things flow, and I’m able to focus on the intricacies.  After the outline was done, I wrote the 125,000 words of The Prophet in about a month and a half.

Area 51, of course!!!  I could finally learn why the lizard people killed my father!

The fortune, fame, and groupies…wait, that’s a rock star…or maybe a politician.  But seriously, I think the best thing about being a writer is the act of creation. I’m happiest when I’m enjoying someone else’s creation or bringing one of my own into existence. Forging something new from nothing using only your imagination is a very therapeutic and fulfilling experience.

That I’ve never actually killed anyone… Kidding… I’ve killed lots of people… Kidding again!… My lawyer has advised me not to answer this question any further.

Actually, the truth is that I won’t even kill bugs.  If I find an insect in our house, I catch it and release it.  A few years ago, we had a mouse get into our house.  I purchased live capture traps, so that we could get rid of the little guy without harming him.

Stephen King said it best. “If you want to be a writer, you must do two things above all others: read a lot and write a lot.”  I completely agree with him.  The first step in succeeding as a writer is having a deep love of stories and then learning how to write. You can do that in many ways including reading (and doing it a lot), taking classes, attending conferences, etc.  For me, the most significant and worthwhile experience was attending Thrillerfest in New York.  While there, I took classes from some of the biggest selling and most accomplished writers in the world.  I learned so much and have applied those techniques to my writing.  I also made a lot of great friends and business connections while there. So I guess I could sum it up as: have an incredibly strong desire to write and a deep love of stories, learn to write well (and keep learning and improving), and get out there and make connections.

I’m currently working on the fourth full-length addition to the Shepherd series.  It’s tentatively titled The Judas Game and will take place primarily inside the walls of a prison.

Ethan Cross has already proven his writing chops with the highly acclaimed and intensely addictive Shepherd series. If you’ve already read his work, you know that greatness awaits. If not, go check him out. By the time you read this, BLIND JUSTICE (August 25) will have just hit store shelves, so make sure to check out what looks to be the beginning of another gripping and memorable series from this rising thriller master. 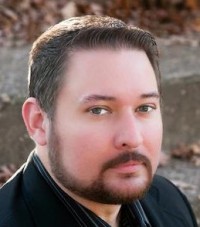 When a fireman or a policeman would visit his school, most of his classmates’ heads would swim with aspirations of growing up and catching bad guys or saving someone from a blazing inferno. When these moments came for Ethan Cross, however, his dreams weren’t to someday be a cop or put out fires; he just wanted to write about it.

And his dream of telling stories on a grand scale came to fruition with the release of his first book, The Shepherd, which went on to become an International Bestseller published in several countries and languages. Ethan followed this up with more great titles like The Prophet, The Cage, Callsign: Knight, and Father of Fear. His latest book is Blind Justice coming from the Story Plant in August 2015.

In addition to writing and working in the publishing industry, Ethan has also served as the Chief Technology Officer for a national franchise, recorded albums and opened for national recording artists as lead singer and guitar player in a musical group, and been an active and highly involved member of the International Thriller Writers organization.

Ethan Cross is the pen name of an author who lives and writes in Illinois with his wife, three kids, and two Shih Tzus. To learn more about Ethan, please visit his website.