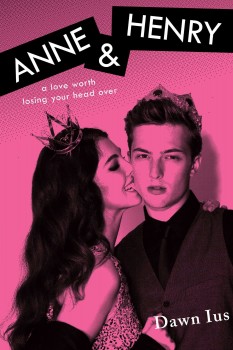 The 16th century love affair of commoner Anne Boleyn and King Henry VIII is one that resonates like few others. Their passion changed the course of England and produced Queen Elizabeth I—but it also ended in grisly tragedy, ie, the headsman’s block. Ever since, novelists and biographers, poets and playwrights have tackled the telling of this relationship. Now it’s the turn of Canadian writer Dawn Ius, with a young adult novel set in a modern high school. ANNE & HENRY is fresh, daring, sexy, funny, and suspenseful, with an Anne Boleyn who rides a motorcycle!

Experienced journalist and editor Ius, who also writes short stories, graphic novels, and YA paranormal, tells The Big Thrill why she answered the siren call of Anne Boleyn with this novel, going on sale September 1st.

Are you interested in Tudor fiction and the other real-life royals who lived in that century or is it the love story of Anne Boleyn and Henry VIII that dominates your interest?

I have a deep-rooted fascination with historic (and modern) love stories—and few are more compelling than Henry and Anne’s. But while researching this book, I came across quite a few intriguing characters. At some point, they may make their way into future stories.

How much research did you have to do for the novel?

​Before I started writing ANNE & HENRY, I borrowed about ten books from the library and poured through them. I watched The Tudors (mostly for Jonathan Rhys Myers), and I read quite a few blogs and articles from Tudor fan sites. But I also had a great “live” consultant—Bree Ogden, then of D4E0 Literary, co-agented this book with my agent Mandy Hubbard, and she has a tremendous wealth of knowledge (and passion) for and about Anne Boleyn (her signature is tattooed on Bree’s shoulder!) If I couldn’t find something or had questions, I knew I could ask Bree. And yet…I probably only scratched the surface of what’s out there.

When were you first drawn to Anne and when did you decide to tell her story?

​My stepfather is in love with Anne Boleyn, and even at a young age, I remember him telling stories about her—trying, in his own way, I suppose, to separate myth from fact, as best he could. Even though ANNE & HENRY is told in alternating points of view, her side of the story resonates with readers the most. I’m constantly in awe of Anne Boleyn’s continued (and passionate!) fan base—decades after her beheading—and I know my Anne won’t please them all, but I wanted to write her character in a way that would pay tribute to the strength, courage, and beauty that my stepdad always talked about.

Did you ever consider writing about her as an adult in her time?

Not in this way, no. Henry and Anne’s story has been done so well by so many brilliant authors that I truly didn’t think I could contribute anything new. I do have an adult thriller series I’m working on that may incorporate Anne and Henry’s story at some point—but there are many infamous romances I’ll likely cover first.

Do you think that it was her confidence and defiant bad-girl aura that won Henry VIII for the real Anne Boleyn?

​Partially, yes. It’s well documented that Henry was a bit of a playboy and if he could have gotten away with her just being one of his mistresses, history might have played out very differently. At the beginning of his reign, Henry was more interested in having fun than being King, and Anne played into that—she was confident, rebellious, sexy, and perhaps most important, represented a challenge. Unfortunately, these factors also sealed Anne’s fate.

How difficult was it to transport their story to present day and to high school?

​Extremely difficult, and I predict it will be one of the book’s largest criticisms. It’s impossible to equate the significance of Anne and Henry’s real-life romance in a high school setting without it coming off as a bit trivial or falling into some overused YA tropes. And for readers with limited or no knowledge of Anne and Henry’s real life story, some of the characterization can be off-putting. Yes, my Henry is somewhat spineless, and easily influenced by his family and friends. In YA, that can translate to him being a whiny “mama’s boy”—but the real Henry, especially at this point in his reign, WAS easily influenced and somewhat spineless. Hard to create a swoony hero when he actually wasn’t that swoony. A difficult balance.

You also write paranormal YA. Were you ever tempted to make Anne’s and Henry’s story more magical?

​Funny you should say that. I joked with my editor about making it a zombie story, but that was mostly to get a rise out of her. Certainly the potential is there, but it never seriously crossed my mind. Though, when I first started writing the book, I considered making it a bit more of a thriller / mystery.​

​As a kid, I dreamed of being a writer—but my dreams never involved writing young adult books. Ironically, I’m really drawn to it, and now, I can’t imagine NOT writing YA, at least in some capacity. Some of my favorite books are those I read as a young adult and I still read The Outsiders by S.E. Hinton once every year. Same with Charlie and the Chocolate Factory. There’s a certain magic to writing for teens. Young adult books have changed so much over the years, but so have youth. Keeping pace with those changes—and knowing where to draw the lines—can sometimes be challenging, but I think that’s true with all books and genres.

Is your next book set in the Tudor era?

It isn’t—and I actually struggled with that. Lots of ideas brewing, and I might return to this period at some point (I’d love to do a Queen Elizabeth modern retelling), but my next YA is called Overdrive, a high-octane romantic suspense pitched loosely as Gone in Sixty Seconds for teens. I am a muscle car junkie, and everything about this book—from the characters and plot, down to the amazing research—was such a thrill to write. If readers love it even a fraction as much as I loved writing it, I’ll be over the moon. 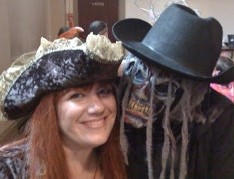 Dawn Ius is a short-story author, novelist, screenwriter, professional editor, and communications specialist. She is co-founder and senior editor of Vine Leaves Literary Journal, Assistant Managing Editor of the International Thriller Writers’ The Big Thrill magazine, and the author of ten educational graphic novels published by the Alberta Canola Producers Commission. Dawn also writes young adult thriller and paranormal fiction under the last name DALTON. Her short story, THREAD OF THE PAST was included in the SPIRITED anthology (Leap Books, 2012), and her novel, KILLER’S INSTINCT (Leap Books, 2013), co-written with Judith Graves, was nominated for the Silver Falchion award.

Connect with her on Twitter @dawnmius, and check out her blogs at Dawn-ius.blogspot.com and DawnMDalton.blogspot.com.