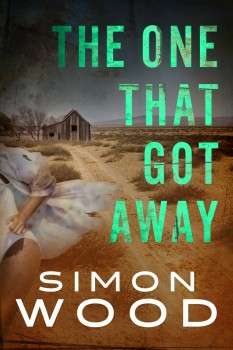 I was quite excited to get this assignment—Simon Wood, author of twelve novels, six short story collections, two audio books, and numerous non-fiction how-to articles. Quite a library of work. And I’m sure he’s sold a lot of them—over 500,000, I’m told. Five of those to me.

In THE ONE THAT GOT AWAY, Wood delves into the world of post-traumatic stress disorder, something we’ve all heard about and think we understand. His interest in the subject led him to study the subject with everyone from returning veterans and advocates for abused women, and he found that “PTSD is something people don’t understand generally. It’s something I didn’t really understand myself. I’ve attempted to highlight the issues and behaviors in the book with the hope people will look into the topic themselves.”

In addition to his own writing, Wood participates in writing and publishing events and even holds workshops on marketing. These came about in what has to be a formidable and impressive decision.

“About five years ago I was on the ropes career-wise. I’d lost one publisher, the rising popularity of ebooks and the recession was moving another publisher towards chapter 11 and my career looked dead. I was desperate, so I took a risk and invested in my writing. I negotiated my rights back, pulled together my backlist, repackaged it, promoted, advertised and did what I could to build a readership, and it worked. I built some momentum and ended up with new book contracts on the back of it. People asked how I did it and the workshops were born.”

I did wonder about his marketing expertise as he doesn’t even own the simonwood.com web site address. He says the current owners want too much for it. “I’m willing to buy it and have made an offer but the owners say it has premium value. I say not so much.”

Plagiarizing the title from one of his short story collections, here are some Short, Sharp Shocks about Wood.

One final note. I was especially interested to connect with this successful and respected author because we share a number of friends, experiences, and interests. When I pointed this out and wondered how we’d never met before, he explained it this way: “I have put a lot of effort into avoiding you.” I take it as a compliment that he was sufficiently aware of me to find that necessary. 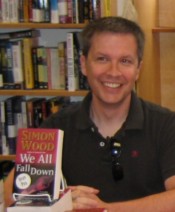 Simon Wood is a California transplant from England. He’s a former competitive racecar driver, a licensed pilot, an endurance cyclist and an occasional PI. He shares his world with his American wife, Julie. Their lives are dominated by a longhaired dachshund and four cats. He’s the Anthony Award winning author of Working Stiffs, Accidents Waiting to Happen, Paying the Piper, Terminated, Asking For Trouble, We All Fall Down and the Aidy Westlake series. His next thriller is THE ONE THAT GOT AWAY due out March ’15. He also writes horror under the pen name of Simon Janus.