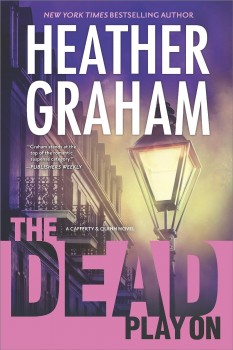 As a reader, how do you know you’re in for a treat before you even open the book at page one? A quick answer would be to say that it’s written by Heather Graham. Graham is the New York Times and USA Today bestselling author of more than one hundred books, boasting a career that has garnered her numerous awards.

My treat this month was THE DEAD PLAY ON, which is the third book in Graham’s Danni Cafferty and Michael Quinn series. Based in New Orleans, Cafferty and Quinn solve unusual crimes that the cops can’t.

In this latest outing, an apparent suicide turns out to be one of a number of musicians who have been murdered. The body count continues to rise, with the saxophone of one of the dead men at the center of the mystery—and possibly sending messages from beyond the grave. It’s a colorful, atmospheric paranormal with a host of vibrant characters and a great heroine and hero at its heart.

In my The Big Thrill interview with Graham, she answers questions about the book and what has made her the writer she is.

For me, New Orleans was like another character in the book, providing the perfect atmosphere and setting for this gripping paranormal romantic suspense. Did the setting provide the inspiration for this series, or did Danni Cafferty and Michael Quinn come calling first?

A bit of both! I was in the city mulling the kind of series I wanted to do and I saw the perfect place for their shop on a corner of Royal Street. Also, the city really lends itself to a paranormal suspense—and has as long as I can remember. It’s also a writer’s city—Truman Capote liked to claim he was born in the Monteleone (also on Royal Street) though I think the truth is that his mom went into labor there. Tennessee Williams—think A Streetcar Named Desire!—spent a great deal of time at the hotel, as did Eudora Welty, and many more. Harriet Beecher Stowe was a guest at the Cornstalk House while mulling Uncle Tom’s Cabin after seeing the slave market and . . . the list is endless! I have a free booklet up at Amazon that’s a collection of blogs on why I love NOLA for anyone interested. The city was simply perfect for the people I needed for the series—and the people were perfect for NOLA.

This is the third outing for Danni and Quinn. When writing a romantic suspense series, does it become more difficult to keep the sparks flying between your heroine and hero? What do you do to keep it fresh?

Danni and Quinn are involved in a strange and dangerous business and I believe that knowing in the back of your head that you could too easily lose someone helps you remember what they mean to you. Also, I try to keep them both stubborn—aggravating one another so that they do maintain a certain conflict. While they’re both NOLA natives, Quinn is Garden District and Danni is French Quarter; Danni was a fantastic art student; Quinn got into tons of trouble. And there’s always a little something in the back of her mind about the fact that Quinn knew Danni’s father and about his “real business” while he was still alive—and Danni knew nothing until Angus Cafferty died.

The paranormal elements in the book felt as believable as the real life aspects. With a Scottish father and an Irish mother, do you think that a Celtic heritage lends itself to a curiosity about the otherworldly? (I ask this as a fellow Celt!)

Oh, Lord, yes! I grew up with tales of banshees and leprechauns and different ghosts, tuatha de danaan, giants, you name it. Also, a few I’m pretty sure my family made up, such as hybrid evil pixies who began to appear after the Norse invasions and underworld battles with the trolls. They were all fantastic—I know I would be nowhere without the great storytelling by both families.

I think there has to be a hybrid evil pixie/troll book at some point! There’s another element in the book that is part of the real Heather Graham. In their bid to track down the serial killer who’s slaying musicians, you have Danni and Quinn put in a stint as part of a bar band. What’s happening in your musical life?

The Slushpile Band is still playing! We’ve been lucky enough to have venues now and then such as at the House of Blues. The band is a loosely-knit group of whichever members can be where when. It has featured ITW members such as F. Paul Wilson, Don Bruns, Alex Sokoloff, Harley Jane Kozak, Dave Simms, Daniel Palmer with his killer voice and harmonica, David Morrell on keyboard, and many more. I think my favorite “use” of us as a group was the year we took a number of players from a con and entertained (with a bit of theater thrown in) at a children’s hospital. (That thanks to C.J. Lyons, physician as well as kick-ass writer!) And it’s a small world; I’m Facebook friends with a few of the Rhodes Brothers—my first real employers. I was totally a jack-of-all-trades with them—bartender, recording back-up singer, and dinner theater actress. I remember a time when my odd jobs let me write—now writing has been kind enough to let me have “odd jobs” now and then! Music is so much a part of New Orleans, it seemed natural that one of the duo of Cafferty and Quinn would have to have had a penchant for a musical instrument.

You’re such a prolific writer, it would be unfair to ask the ‘favorite child’ question! But as you’ve written many series, can you narrow it down to a favorite series? If so, what makes that one so dear to your heart?

Naturally, the favorites are the ones out now–Cafferty and Quinn and the Krewe of Hunters. Long ago, I wrote a Civil War historical romance series with books titled One Wore Blue, One Wore Gray, and One Rode West. They carried them at the Abe Lincoln Museum in Gettysburg, which was a humbling thrill for me. I’m also getting back to the vampires one day, and next year, at this time, I’ll have my first straight suspense in some time out—The Diamond Affair. It’s about an Irish American family that owns a pub in New York. The parents are dead; the children have taken over, and while the sister is trying to keep them all straight, the brothers have a tendency to get in trouble while defending others in unjust situations. Thefts and murders in the Diamond District bring in an FBI man and the family finds themselves in a strange balancing act.

You’ve had such an amazing and inspiring career as a writer: a worldwide bestselling author, with more than a hundred books published, and well-deserved recognition by the industry and your peers. But with the bar set so high, when you’re starting a new book, day one, page one, do you feel the weight of expectation? Or is it still fun?

I thank God every day that I get to do something I love so much for a living! I’ve also been really thrilled to work on a number of anthologies that are tremendous fun, often with/for/edited by other ITW members, or with friends from other organizations. Recently, a story for an anthology based on Lovecraft’s work and another with ITW member Jonathan Maberry, on the X-Files. There’s always something new happening in the world—or a visit to a place that’s new to me. And, truly, the world has so many bizarre stories to work off of that I’m not sure it’s possible to run out. (Such as one of my favorite Key West stories, Carl Tanzler—who stole a corpse, preserved it, married the young woman, lived with her as her husband in every way for seven years—and was then deemed sane by psychiatrists in Key West. Love the Keys . . . I think we almost require that you not be completely sane to reside there.)

I think the pixie/elf story just got trumped! But more importantly, what about Danni and Quinn—will they be getting another outing? What else is in the pipeline for you?

Danni and Quinn will be featured next in a novella for Sweet Dreams, one of Brenda Novak’s anthologies to raise money for juvenile diabetes. They’ll be a promo out shortly that’s an “interview” I did with them on New Orleans and it turned out to be tremendous fun to do. I love NOLA and throw a benefit conference there every year—luckily with a lot of help from fellow thriller writers who often appear for me as special guests. We’ve done it since the summer of storms, all at cost—started because friends said that if we got people into the city, they would tell all their friends that could come back and those friends would tell their friends—tourist destinations have to have tourists for the people to keep working. Ahem. Naturally, they’re in love with a few places that I love and love to do a few things I love to do—such as jazz mass at Our Lady of Guadalupe (Rampart Street, Sunday—also the “Old Mortuary” church where victims of the yellow fever epidemics and more were brought before interment.) Also, the Krewe of Hunters reappear this summer with The Silenced, The Forgotten, and The Hidden.

And finally, a time travel question. If you could tap your eve of debut publication self on the shoulder and give them some of your acquired wisdom, what would it be? Do you think you’d listen?

LOL—I’d have told myself to take a few business courses, tax courses, and given myself a time travel course on the Internet, E-publishing, and the future of banking and the world. Naturally, I could have done some smart investing. I sadly have almost no business acumen—I don’t think at the beginning that I ever believed that I would need it or that I would really be able to make it a career. I think, too, I’d tell myself something to that tune—we’re not trying to just get anything out there. We don’t want to write bad books, we want to write the best books we’re capable of writing. And we’re not trying to just throw a book out there, we’re trying to have careers as writers. No writer will every please everyone and certainly not every time, but we are trying to please the reader we were when we fell in love with a certain story ourselves. 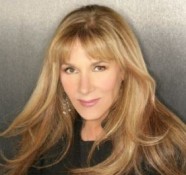 Heather Graham is the New York Times and USA Today bestselling author of over two hundred novels including suspense, paranormal, historical, and mainstream Christmas fare. She lives in Miami, Florida, her home, and an easy shot down to the Keys where she can indulge in her passion for diving. Travel, research, and ballroom dancing also help keep her sane; she is the mother of five, and also resides with two dogs and two cats. She is CEO of Slush Pile Productions, a recording company and production house for various charity events.