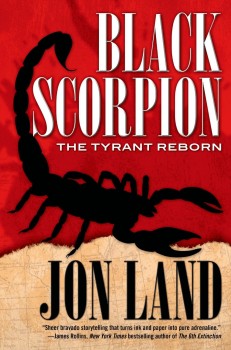 What can one man do against a huge criminal organization bent on world domination? Jon Land shows us in BLACK SCORPION: THE TYRANT REBORN, and thriller fans will love getting the answer.

The man in question is Michael Tiranno, whose cunning and ruthlessness in business earned him the nickname “The Tyrant.” Land introduced him in The Seven Sins. In that novel, Tiranno saved Las Vegas from a terrorist attack. This impressive character fully deserved to return in an even bigger adventure.

“You’d find him captivating, fascinating, charismatic, engaging, and a bit brash,” Land says. “The Tyrant inside him only emerges when he, someone close to him, or someone vulnerable, is harmed or threatened. The question, of course, then becomes which is the real Michael Tiranno.”

Tiranno gives us a clue to that in BLACK SCORPION when asked why he helps a family that just lost their house to foreclosure. He says, “Because I know what it’s like to lose a home.” But as Land points out, Tiranno’s motivations are more complex than that.

“I think Michael’s entire life, the core of his very existence, is about replacing what he lost the day as a young boy he witnessed the murder of his parents,” Land says. “But he can never get it, not really, which leads to him being a constantly restless soul moving on from one quest to another.”

For the last five years, Tiranno has been building his Las Vegas empire, and searching for the truth behind the mysterious medallion that’s all he has left of his family. His focus shifts when his beloved Scarlet Swan is taken hostage by Black Scorpion, a global criminal organization. Tiranno will stop at nothing to save her, so the battle is on. But if you know Jon Land’s books you already know that’s just the beginning for Tiranno.

“Along the way, he’s going to discover shattering truths about what Black Scorpion is really up to,” Land says, “and, more importantly, about himself.”

Black Scorpion is far more than a Mafia, Tong, or Yakuza, but we won’t spoil the book for you by telling you the jarring truth about the organization. But we CAN tell you that the divergence between our hero and villain is at the core of this novel.

According to Land, “The glamour and glitter of the world Michael has built in Las Vegas forms a striking contrast with the dark, eerie world where the villain, Vladimir Dracu, resides in Romania. It’s literally and figuratively a battle between light and dark. And what makes Dracu such an awesome villain is in large part his own tragic past, highlighted by becoming a victim of the very human trafficking scourge he now operates on a global basis. There’s a delicious irony there in which Dracu must become what he hates the most in order to achieve what he craves the most. And what he craves the most is the light that Michael Tiranno inhabits.”

The Seven Sins focused on how Tiranno became “The Tyrant.” While that was an incredible read, BLACK SCORPION is even more ambitious. This is a true international action-adventure thriller that follows the growth and transformation of a character as he accepts his true nature. Tiranno is a whole different person at the end of this novel, in a way that will draw you in.

“That makes the story much more accessible to the reader, something he or she can relate to,” Land says. “In Black Scorpion we watch him evolve into a Tyrant for good, a true superhero without the mask or cape.”

Another bestselling thriller author, Jim Rollins, has said that Jon Land is capable of “storytelling that turns ink and paper into pure adrenaline,” and I agree. I asked Land how he does it, and while it’s hard to explain the magic of great writing, he shared some thoughts:

“It’s not rocket science; it’s all about getting the reader to keep turning the pages by creating engaging characters and then putting them in desperate structural and emotional plights. To that I add cliffhanger chapter endings and hooks at the chapter opens. It also comes down to an innate, instinctive sense of when to cut a scene, move on to the next, and then when to cut back to where you left off. Almost like being a combination of a film director and editor at the same time. The big secret is seeing everything unfold visually and viscerally and then communicating that same vision to the reader. Because when you write it comes from the part of you—the imagination—that remains a child forever. And you’re also speaking to that same part of your readers.”

Land’s fans who have been following the adventures of Texas Ranger Caitlin Strong may be wondering if they can now count on two series from this author. Is there a future for Tiranno?

“There will more books featuring him,” Land say. “I just can’t predict when we’ll see them. Caitlin Strong only gives me so much time off, you know, and I don’t want to get on her bad side!”

We’ll have to wait until October to read the next Caitlin Strong novel, but luckily, the new Michael Tiranno book gives us some great reading while we wait.

Bottom line: If you love larger-than-life heroes, bone-chilling villains, exotic locales, global conspiracies and non-stop action, BLACK SCORPION, THE TYRANT REBORN should be your next read. 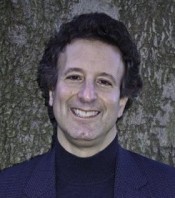 Jon Land is the USA Today bestselling author of 37 books including the critically acclaimed, award-winning Caitlin Strong series, the most recent of which, STRONG DARKNESS, recently won the 2014 USA Best Book Award in the thriller category. The next in that series, STRONG LIGHT OF DAY, will be published this coming October. He lives in Providence, RI.