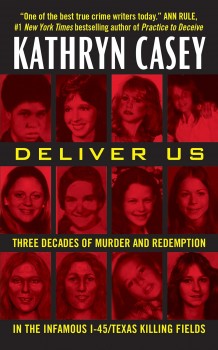 Anne Rule crowned Kathryn Casey one of the best true crime writers today, and called DELIVER US, “A true crime classic! A chilling study where both the victim and the stalker are bizarre and inscrutable.”

In DELIVER US, Casey delivers a riveting account of the brutal murders of eighteen young women in the I-45/Texas Killing Fields. Over a three-decade span, more than twenty women—many teenagers—died mysteriously in the small towns bordering Interstate 45, a fifty-mile stretch of highway running from Houston to Galveston. The victims were strangled, shot, or savagely beaten. Six met their demise in pairs. They had one thing in common: being in the wrong place at the wrong time.

In this harrowing true crime exposition, award-winning journalist Kathryn Casey tracks these tragic cases, investigates the evidence, interviews the suspects, and pulls back the cloak of secrecy in search of elusive answers.

Kathryn Casey is an award-winning journalist and an author, who has written for Rolling Stone, TV Guide, Reader’s Digest, Texas Monthly and many other publications. She’s the author of seven previous true crime books and the creator of the highly acclaimed Sarah Armstrong Mystery series. Casey has appeared on Oprah, Oprah Winfrey’s Oxygen, Biography, Nancy Grace, E!, truTV, Investigation Discovery, the Travel Channel, and A&E. Casey is based in Houston, where she lives with her husband and their dog, Nelson.

You’ve written a number of true crime novels over the years. What drew you to this genre?

I read Ann Rule, Jack Olsen, and Truman Capote as a young journalist and became fascinated by their books. Then I worked as a reporter covering crime cases for national magazines for years. The books grew out of my magazine work, as I encountered cases I wanted to explore more fully. True crime is, of course, the ultimate mystery, because it’s real. This isn’t the product of imagination, but an examination of the very worst, and sometimes the very best, of which humanity is capable.

Tell us something about DELIVER US that isn’t mentioned in the publisher’s synopsis.

These cases are fascinating on so many levels. First the crimes span three decades, so they take us back to another time, one where parents allowed their children more freedom. News traveled slowly, without the Internet, and families tended to hear, for the most part, only about atrocities that occurred close to home. Then there are the stories of the girls—the victims. They felt young and strong, and were often too trusting. The heartbreaking accounts of the families, many of whom I tracked down and interviewed. All these years later, they still cope with their losses and still pray for justice. I also went inside prison walls to interview the main suspects, which was troubling, yet fascinating.

You mention searching for the “why” behind the crimes. Do you find it frustrating that the crimes in DELIVER US remain unsolved?

That’s why these cases are such incredible whodunits, because the answers have remained elusive, despite decades of investigation. In spite of their notoriety, the first time the I-45/Texas Killing Fields cases have been explored so fully is in my book. That many of these murders remain unsolved presented unusual challenges, but it also gave me the opportunity to take a fresh look. In the end, I examined each of the nineteen cases in the book, narrowed down the main suspects, and weighed the evidence, revealing what is and isn’t known, then left the conclusions to the readers.

Deliver Us is, of course, a reference to the Lord’s Prayer, the final lines where worshippers plead for deliverance from evil. Certainly the crimes in the book, hunting, abducting, and murdering innocent victims, rank among the ultimate evils.

Your career has spanned decades—during which you’ve witnessed upheaval in both journalism and the publishing industry. Do you think your journalism background prepared you for the investigative world of true crime?

I have a degree in journalism, and I spent twenty years as a working reporter, and yes, those experiences help immensely. As a journalist, I am trained to look at cases from all sides. I know where to go to find answers, and I work hard to get at the truth. I believe it gives my books more depth and dimension. I’m used to doing the work. For instance, whenever possible, I go to the trials. I don’t simply rely on transcripts.

Would you encourage today’s young writers to pursue journalism?

I would. It’s great training for nonfiction writing, and for fiction. Working as a reporter teaches a writer how to uncover facts, where to go to find answers, and exposes them to multitudes of stories and life experiences. There’s little more dramatic than watching a real trial unfold in which a defendant has his or her life hanging in the balance.

I noticed you write fiction as well as true crime. How do you resolve the differences between fiction and non-fiction, beyond the freedom to make up the story in fiction?

I’ve never felt that there’s any friction between the two. I love writing fiction, and I plan to return to it in the coming years. After decades as a crime reporter, I have experiences to use as fodder for plots and characters. In addition to being able to employ my imagination, I appreciate the control fiction brings. If a novelist dislikes a character or a plot line, she has the option of rewriting. In true crime, the case is as it is, and, as much as I would sometimes like to, I can’t write a person out, change anyone’s actions, or alter the plot.

What’s the best—and worst—advice you received as an author? Do you have any advice for new or aspiring authors?

To believe in myself and to understand that everyone experiences disappointments. So many would-be authors send out a first manuscript to an agent or publisher and when ignored or rebuffed never make a second attempt. Perseverance and focus are essential to building a career. Few writers are rabbits who sprint across the bestseller line with the first book. Most are tortoises who keep trying.

Okay, enough with the business questions. How about some fun stuff? Tell us one thing about you that might surprise us. It can be a secret—we won’t tell.

Hmm. Well, there aren’t many secrets. I’m active on Facebook and Twitter and most of my secrets have been told. One thing folks might not know is that I’m a pretty good cook. I make my grandmother’s ravioli every Christmas, the pasta from scratch. It’s one of my favorite things. Actually, my husband and I spend way too much time watching cooking shows. We find them addictive.

Where might we find you when you’re not writing?

Probably researching and interviewing. I honestly go from one book to the next with little down time. So while one book is with my editor, I’m most likely sitting in a courtroom covering a trial or collecting information for the next. Right now I’m working on two new true crime books: Houston’s stiletto murder, where Ana Trujillo pummeled Dr. Stefan Andersson to death with her high-heeled shoe; and the Kaufman County murder cases, the vendetta killings that claimed the lives of a gifted prosecutor, a district attorney, and the D.A.’s wife. Both cases made worldwide headlines.

I remember reading about both cases, and look forward to your analysis of them in your next book. 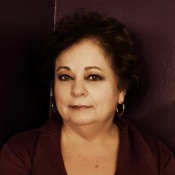 Kathryn Casey is an award-winning journalist and an author, who has written for Rolling Stone, TV Guide, Reader’s Digest, Texas Monthly and many other publications. She’s the author of seven previous true crime books and the creator of the highly acclaimed Sarah Armstrong mystery series. Casey has appeared on Oprah, Oprah Winfrey’s Oxygen, Biography, Nancy Grace, E!, truTV, Investigation Discovery, the Travel Channel, and A&E. Casey is based in Houston, where she lives with her husband and their dog, Nelson. Ann Rule calls Casey “one of the best in the true crime genre.”