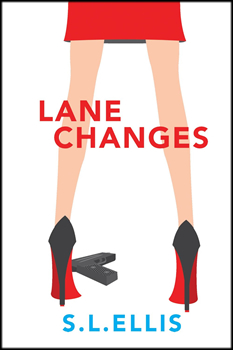 S.L. Ellis’s debut novel hit the streets with attitude! Cassie Cruise wants her life back as a kick-ass P.I. Trouble is, she has zero credibility since bungling a case on reality TV. After a public tantrum, she slinks off to bury her head in the sandy beaches of Southwest Florida.

Just as she starts over as the owner of The Big Prick Tattoo Shop, a body is discovered in the trunk of her burning car. Cassie’s aware there are those who’d get in line for their turn to torch her car. But murder?

You don’t have to like her, but you damn well better respect her. And get out of her way—this is one case she intends to solve, with or without an audience.

Kirkus Reviews called it “A captivating introduction to a cozy female PI series with potential for wide appeal.” Jack Magnus of Readers’ Favorite went further: “Ellis’ hard-boiled detective story, Lane Changes, is a refreshing new take on the private detection genre. Cassie starts working on a mystery . . . she just can’t let go, and it’s a joy to watch her as she digs in with a ‘to hell with the consequences’ attitude. I’m looking forward to reading more stories featuring Cassie Cruise. Lane Changes is good, gutsy and highly recommended.”

She recently sat down to answer a few questions for THE BIG THRILL.

Tell us something about Lane Changes that isn’t mentioned in the publisher’s synopsis.

Cassie Cruise has a collection of 1930/40 classic movies, and in times of stress she’ll hear Bette Davis speaking to her.

I read that you call your current hometown a retiree paradise and the reviews talk about Cassie’s “artistic, ethnic, active septuagenarian” sidekick. Did you include any of your personal or professional experiences in the book?

When my husband and I first moved to Florida, we unknowingly moved into a subdivision made up of retirees where we were some of the youngest in the neighborhood. I soon discovered the retirees in Florida were so much more than the clichéd golf fanatics and shopping addicts that we hear about. Those I got to know never faked nice, never shied from stating their opinions, and they obviously enjoyed life in retirement. They were an inspiration for adding to a 401(k)!

Eight years later, we moved to a condominium building across from Sarasota bay. This building, too, was overtaken by the retired. Even the handful of concierge/security for the building was “active septuagenarians.” Every morning as I left for work, a whiskey-voiced, cigarette smoking, 85-year woman (whose name I won’t mention, although I can say it’s very similar to the name of the “good witch” in Wizard of Oz) was at the desk with a smile. I could’ve talked with her for hours without hearing anything banal or tempered to anyone else’s idea of appropriate. Janice, Cassie’s sidekick, was borne from a combination of this woman and a gorgeous and proudly ethnic coworker. Then there is the story of the French woman in the adjoining condo—well, let me just say I learned some interesting French phrases to use during a certain activity generally not associated with the elderly. Overall, the characters in Lane Changes are a combination of these neighbors, coworkers, and their quirky personalities.

Several reviewers also mentioned initially not liking Cassie Cruise, your heroine, but having her grow on them over the arc of the story. Do you think that assessment will be a challenge for future readers?

I had an early indication that not all readers would appreciate Cassie, but decided not to change her too much. To try to mold her into a more generic character wouldn’t work for me as the writer. I wouldn’t want to continue writing the series without the flawed, opinionated, socially inept Cassie Cruise. I’d rather she is genuine and I think many readers that agree. As far as Cassie’s likeability being a challenge for readers, I’d say that it may depend on which genre a reader normally reads. For instance, traditional romance readers could be surprised by Cassie’s personality more than someone who normally reads new adult or mysteries. It also possible that age may have something to do with how a reader reacts to her.

Lane Changes became the title because Lane Somers—Cassie’s new, young, and gorgeous neighbor—is an integral character in this book, and when Lane’s personality changes, so do a great deal of other things in Cassie’s world.

That explains it. I kept envisioning a traffic lane.

Black Opal Books is a small press. What made you decide to go with a small press rather than self-publishing as many of today’s authors have?

I wanted the opportunity to experience releasing a book in a more traditional manner before self-publishing. My hope is to experience all methods during my writing career.

An instructor told me to listen and weigh all criticism, but then learn a way to “gut check” before making changes to a manuscript. This was the best advice because it helped me to understand that my thoughts and reasoning were as vital as any critic’s opinion. I had a tendency to believe other people had more writing chops, and I would make changes in my story based on their suggestions. While many of the suggestions were good, a few times they didn’t fit my story. I realized I had to keep in mind that only I know the story I need to write.

The harshest advice I received is when told I needed to think as a professional and to stop treating writing as a hobby. I took this to heart (after pouting and moping) and changed my way of thinking. I now realize if I want to grow as a writer and be taken seriously, then I need to make writing a daily habit and to take the business aspects of writing seriously.

I would advise aspiring writers to believe in their skills, but always look for ways to grow and improve.

Okay…enough with the business questions. How about some fun stuff? You know, just between the two of us. The opportunity to go on a surprise vacation arises. You have 90 minutes to pack and get to the airport. Where will you go and what will you pack?

I would pack up my TBR pile, a laptop, pens and notebooks, and head to the mountains! I’d find a hotel or B&B in downtown Highlands, NC and spend the time reading and writing. Since my day job involves constant driving, I’d have to have walking access to groceries, coffee, and nightly cocktails. No driving! Also, a porch to sit, read, and write is a requirement.

Sounds wonderful. And so does the book. Thanks for taking the time to talk with THE BIG THRILL. 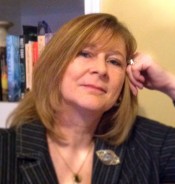 Ellis’s short story A Brush With Death was published in Vol. 12 DARK TALES, a UK magazine and reviewed by: Vince A. Liaguno, DARK SCRIBE MAGAZINE Anthology Reviews: “A Brush with Death is a solid, at times poignant, chiller in which a dying woman—who knows death well after a lifetime of obsession—makes a deal with the Grim Reaper. Ellis’s keen observations on aging and death are spot-on.” Ellis’s short story If the Shoe Fits was accepted for publication in HARDLUCK STORIES for its final issue.