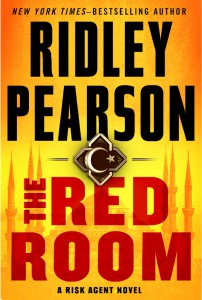 Ridley Pearson has dozens of published novels under his belt, including international thrillers that span continents, conspiracy-laden crime thrillers, and even adventures set behind the scenes at Disney World. With his latest novel, the third installment of his Risk Agent Series, Pearson takes readers into the high-stakes world of art theft set against the equally fascinating backdrop of Istanbul. The author sat down with THE BIG THRILL to give readers a glimpse of the excitement to come.

First and foremost, I’m a dad and husband. Marcelle and I have two daughters, who are seventeen and fifteen, and a young man who came late to our extended family, a son from Kenya, who’s twenty-one. I’ve been a storyteller for most of my life, including time spent as a musician and screenwriter. I’ve been incredibly fortunate and often lucky in my publishing life. I have forty-eight published novels behind me, and I hope a good deal more in front.

Tell us about your new thriller, THE RED ROOM.

THE RED ROOM is the third novel in an espionage series that features two protagonists (a challenging concept). The John Knox and Grace Chu books are more character-driven than my procedural crime novels, but have the same focus on fast pace and high stakes. THE RED ROOM is set in Istanbul and involves the sale of “gray market” art.

What was your initial inspiration for THE RED ROOM? How did the story’s premise develop through the early days of your writing process?

In an international thriller series, the setting has to be a character, not just a backdrop. Istanbul is the only city in the world to span two continents. As such, THE RED ROOM’s narrative had to emerge out of a conflict between east and west, and therefore the characters had to represent east/west.

My cousin is Chief of Exhibitions at the National Gallery in Washington, D.C. We’ve often discussed the idea of an art thriller. I certainly had those discussions in mind when I learned about the enormity of the stolen art market. The value of stolen art is estimated at four to six billon dollars, second only to drug trafficking. As little as five percent is ever recovered, making it a “profitable” crime.

You have been to all sorts of fascinating places and engaged in thrilling activities for your research on previous projects. What sorts of research adventures did you get into for THE RED ROOM? Any interesting stories there?

THE RED ROOM is notable to me because my two attempts to make research trips were scuttled by a murder and by violent protests in Istanbul. I had to return to my roots and do all my research through books and the Internet. That research amounted to hundreds of hours spent in the creation of the novel, and it reminded me how important it is to dig deep—to not just travel to a place and call it good. I got a great deal more out of the research for THE RED ROOM than I have in books past.

How much of yourself do you put in your characters? With which character in THE RED ROOM do you most identify?

The principle characters of the Risk Agent novels were formed through experience—Grace Chu is modeled after college students I taught while living in China—and research: American private contractors like John Knox outnumbered US soldiers in the Iraq war. Certainly Knox and Grace’s emotions and personalities share parts of my own, but they are also drawn to be more, much more, than I’ll ever be.

This is the third book in your Risk Agent series. Can new readers dive into THE RED ROOM straight away, or would you recommend they check out RISK AGENT and CHOKE POINT first?

All of my (series) novels stand alone. Readers might get more character development out of watching Grace and Knox evolve, but there’s no need to read the books in order.

Spoilers aside, what do you think will surprise series fans about THE RED ROOM?

The relationship between Grace and Knox is interesting to write, and fun to watch progress. It’s the most important element of the novels—and it always surprises me, so I hope it will surprise readers, too. And there’s the plot twist, of course!

I’m a firm believer in outlining. I think every writer does it to some degree, even those who don’t write their plans down. Harlan (Coben) says he lies on a couch thinking about the book for weeks or months and then gets up and writes the novel. I use electronic cards in a program called Scrivener. I envy Harlan the couch time!

Other than THE RED ROOM, what is your favorite book that you have written?

My answer: which of your parents is your favorite?

Hands down: TO KILL A MOCKINGBIRD. It has everything. EVERYTHING. And all of it done perfectly.

Possibly that I do four to six total rewrites of each book, typically amounting to two- to four-thousand pages total.

The three most important pieces of writing: read, read, read.

I’ve just (just!) returned from Kenya, where I immersed myself in the sometimes frightening world of illegal elephant ivory and rhino horn poaching. Cue John Knox and Grace Chu… Readers can learn more on my website, and I’m on all social media channels as Ridley Pearson.

Thanks to Ridley Pearson for taking the time to give fans old and new a look behind the curtain. As with all of his books, THE RED ROOM will be sure to thrill and inform as Pearson’s trademark high-octane ring of veracity will keep readers glued to the pages long after midnight. If you’re already a fan, you won’t want to miss Pearson’s latest. If you’ve never read any of his previous works, THE RED ROOM is a perfect place to start. Be sure to check it out when it hits shelves June 17.

Ridley Pearson is the #1 New York Times bestselling author of more than 48 novels, divided almost equally between suspense and young adult adventure. Over the years, his work has been published in two dozen languages, and has been adapted by network television and for the Broadway stage.

His research has spanned the globe and included everything from the engine room of a cruise liner, to a nighttime visit to Walt Disney World’s It’s A Small World ride, to a locked-room visit with inmates at a prison for the criminally insane. The real life aftereffects of this research have at various times helped authorities solve a trio of homicides and briefly made Ridley a silent contributor to an FBI task force charged with the manhunt for the Washington D.C. sniper.

An acknowledged workaholic, Ridley’s hobbies include playing in a rock band comprised of other bestselling writers, snowboarding, and scaling the occasional 200-foot tree. He lives with his wife and two daughters in the Midwest.

To learn more about Ridley, please visit his website.