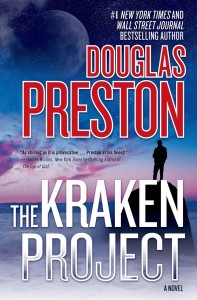 Think science thriller, and you think Douglas Preston. His masterfully crafted, heart-pounding stories take readers slightly past the cutting-edge of science into terrifying “what if” scenarios that sometimes beg the question; do we really want to go there? The latest novel in his Wyman Ford series, THE KRAKEN PROJECT, delves into the world of Artificial Intelligence and the possible consequences of machines outsmarting humans.

Doug began his career as an editor at the American Museum of Natural History in New York, which led to RELIC, his first best-selling novel with co-author Lincoln Child. Since then, Doug has authored twenty-six books, nonfiction and fiction, several of which have been #1 NEW YORK TIMES bestsellers. He continues an active career in journalism, contributing to THE NEW YORKER, SMITHSONIAN, NATIONAL GEOGRAPHIC, HARPER’S and THE ATLANTIC. His most recent nonfiction book, THE MONSTER OF FLORENCE, is being made into a movie starring George Clooney.

In THE KRAKEN PROJECT, former CIA agent Wyman Ford becomes trapped in a technological nightmare after NASA builds a probe to be splashed down in the Kraken Mare, the largest sea on Saturn’s great moon, Titan. The probe has been outfitted with artificial intelligence software, but miscalculations lead to a catastrophe during testing and the software, nicknamed Dorothy, flees into the Internet. Ford gears up to track down Dorothy, but realizes that her horrific experiences in the wasteland of the Internet have changed her in ways he can barely imagine. Traumatized and angry, Dorothy devises a plan. As the pursuit of Dorothy converges on a deserted house on the coast of Northern California, Ford questions whether saving Dorothy is the right thing to do. Is the AI bent on saving the world—or on wiping out the cancer that is humankind?

Doug took some time out to talk about the science behind his latest book, his characters and the writing process.

THE KRAKEN PROJECT is a real page-turner throughout, but it’s the opening chapters that blew me away. It was one of those books where you’re reading and suddenly yell out ‘No way!’ It made me wonder how you came up with the idea for the story.

I spent a few days at NASA’s Goddard Space Flight Center in Maryland. I was fascinated to learn about a planned mission to Saturn’s great moon, Titan. Called the Titan Mare Explorer, this probe—actually a raft or sea-going vessel—would be splashed down in Titan’s largest sea, the Kraken Mare. It would be the first extra-terrestrial sea journey ever made by humankind. As a sailor myself, I was captivated. Titan is the only moon in the solar system with an atmosphere. It also has seas, rivers, clouds, rain, wind and weather, just like earth. Only the liquid isn’t water but liquid methane. The surface of Titan is -290 degrees Fahrenheit. Because Titan is a billion miles from earth—four light hours away—the Titan boat will have to be autonomous. That is, it will have to be artificially intelligent. NASA has just started working on AI software for some of its space missions. As they told me at NASA, putting AI software into a half a billion dollar space mission is fraught with difficulty.

Dorothy becomes one of the most sympathetic characters in the book. You managed to surpass the mechanical persona of Hal, Data, C-3PO and the rest, to a level that feels much more human. The reader experiences life from the perspective of an ‘AI being,’ if I can use that term. It was fascinating, touching, and at the same time terrifying. How did you put yourself into that mind frame?

Alan Turing, the father of artificial intelligence, proposed that the best way to develop AI would be to create software that was self-modifying—that is, it could learn from its mistakes—and then put it through “a course of education.” This is what happens with Dorothy. So I merely took it a step further and envisioned Dorothy as an extremely bright, rebellious, sixteen year old girl who thinks she knows everything. She essentially runs away from home (i.e. NASA) and ends up wandering around the Internet—and is absolutely horrified and traumatized by what she encounters there—the violence, pornography, and hatred. She is not unlike some kid running away from home who wanders into a crack house in Detroit and can’t find her way out.

There have been so many breakthroughs in neuroscience over the last decade. Scientists now believe that every aspect of consciousness is most likely connected to the physical brain and thinking is merely the result of a series of electrical signals, much like a machine. Is the line beginning to blur between the human brain and computers?

There is a group of brilliant scientists, among them Stephen Wolfram and Ray Kurzweil, who believe that the universe is itself a kind of quantum, Boolean-like computation. This is not fringe: there is a great deal of hard scientific evidence that shows this is indeed true. If that is the case, then there isn’t a qualitative difference between a computation by computer and thinking by the human brain. There is absolutely no theoretical reason why a program such as Dorothy could not exist—and in fact it seems likely that we will see Dorothy-like programs in the not too distant future, especially for use with miniature drones, or what I call “dronesects” in the novel. The Kraken Project is not science fiction.

Your partnership with Lincoln Child has been one of the longest and most successful in the thriller genre. Somehow you’ve managed to collaborate while living hundreds of miles apart, sending chapters back and forth until every sentence has been perfectly crafted and as seamless as a symphony. How do you work so well together?

We trust each other. When Linc tells me something I’ve written is pure crap, I have to believe him. (But not after roundly denouncing his execrable taste and Philistinistic attitude). This trust is the only thing that can make a writing partnership like ours work. We are not prima donnas who think that every word that trips off our pen is a precious pearl to be preserved. Linc slashes away at my work and I do the same to his, and in the end, despite getting really pissed off at each other, we end up something that is, I think, better than what we could do working on our own. You might say we massacre each other’s little darlings, to paraphrase the famous observation by Lawrence Block.

Both Wyman Ford and Agent Aloysius Pendergast are two hugely popular recurring characters in your novels. After spending so many years with these compelling sleuths, do they start to have minds of their own? Did you ever write a scene that they refuse to go along with?

Right from the start, Pendergast had a mind of his own—literally from the first fifteen minutes of his creation in a conversation I had with Linc perhaps thirty years ago. He sprang from our heads fully formed like Athena from the head of Zeus. Very often Pendergast will hijack a scene and take it in an unexpected direction. Wyman Ford was a more accidental character. I created him to be a minor character in my novel, TYRANNOSAUR CANYON, but he just kept inserting himself into scene after scene, like the guest who won’t leave when the dinner party is over. But he was such a fascinating character that I let him hang on, until the point that he actually preempted my intended series character, Tom Broadbent. In Kraken, Broadbent is now a minor character!

ITW is celebrating its ten year anniversary and ThrillerFest has been around for eight. As one of its founders and ITW Director-at-Large, did you ever think the organization and the conference would become so successful?

I never believed ITW would come so far, so fast. I credit that to our two founders, David Morrell and Gayle Lynds, along with a half-dozen incredibly talented and energetic people who led ITW in the early days. I think it has been successful because it is truly responsive to the needs of its members; it is innovative, forward-looking and open-minded. And the members, from debut authors to #1 bestselling authors, are all just incredibly nice and helpful to each other, with a real sense of collegiality, mutual support, and camaraderie. Frankly, I have not experienced this kind of warm, welcoming, and uncompetitive atmosphere with any other authors’ organization.

What can we expect to see next from Douglas Preston?

I am working on a nonfiction article for SMITHSONIAN magazine about the mysterious “Kennewick Man”—a very ancient skeleton that was discovered in Kennewick, Washington.

Doug, thank you so much for your time and insight.

Douglas Preston has published twenty-six books, nonfiction and fiction, several of which have been #1 New York Times bestsellers. He also writes for the New Yorker magazine and taught nonfiction writing at Princeton University. He is a founding member and director-at-large of ITW. His most recent nonfiction book, THE MONSTER OF FLORENCE, is being made into a movie starring George Clooney.

To learn more about Douglas Preston, please visit his website.