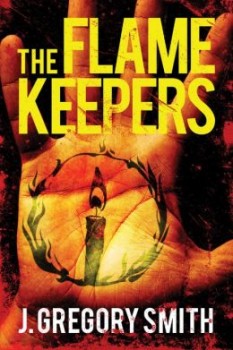 The FLAMEKEEPERS, the doomsday cult at the heart of J. Gregory Smith’s new novel of the same name, sounds ominously real.

With a charismatic leader who keeps followers enthralled, the group seems to be on the way to developing a deadly chemical weapon. The novel’s hero, Lukasz Gardocki—his proud Polish-American father wanted him to have a distinct name—is forced to infiltrate the group when the sister of his deceased best friend reaches out to him.

Though former wild child Alecia Motley kicked a drug habit with the help of the organization’s leader, she has made a shocking discovery and works to help Lukasz as the story unfolds. The FLAMEKEEPERS may not just be prepping to survive an apocalypse.

They may be planning to bring one on.

Smith, who also writes the Paul Chang mystery series, set out to create an organization with the ring of authenticity, but he said in a recent interview that no single headline gave birth to THE FLAMEKEEPERS.

“I don’t think there was a specific incident that sparked my interest, but I started my research trying to find an interesting way to reconcile two distinctly different cultures,” he noted. “On one side there are the `preppers’ who believe in survival and the seemingly contradictory cult of personality that is embodied by the Flamekeepers’s Inner Circle. I’ve jokingly called the resultant mix a cross between `Doomsday Preppers’ and the Manson Family.”

Smith, a former public relations professional who earned an MBA from The College of William & Mary, found as he crafted the novel that the cult “evolved into a layered organization populated by frightened but well-meaning survivalists and the more sinister Inner Circle led by the charismatic Morgan LeClair and the heavy-handed enforcer, Dom Eckert.”

In the story, Morgan provides the organizational spark that draws individual preppers who believe society will break down. “He gives them a community that can leverage their skills and gives them hope that not only will they survive, but they’ll be the ones to pick up the pieces afterwards and rebuild society,” Smith said.

Morgan offers safe haven for like-minded people and he doesn’t discriminate between what forms the apocalypse might take. He takes in all those whose true belief is that one way or another society will collapse.

“Once established, Morgan has a wonderful cover organization to pursue his much darker plans for the world,” Smith said.

“Anytime I create a fictional organization, especially when they are up to no good, (usually) they have to have a plausible source of income to fund their mischief and buy assorted gadgets,” he said. “It’s not quite as essential for a lone psycho, but a large integrated operation needs to have legitimate or at least apparently legal revenue.”

“Also, the way money is used plays an important role in the fabric of the thrillers,” Smith said. “A desperate character on the run from well-connected pursuers would think twice about using a credit card or ATM for fear of being tracked. That’s another opportunity to give the character a problem to solve.”

Money’s corrupting power can also contribute complications and motivations for the bad guys. The organization provides many challenges for Lukasz Gardocki.

“Lukasz is an expert on stealth but he’s never operated in a sustained undercover mission before,” Smith said.

Fortunately his friend’s sister can provide a little help.

“Alecia isn’t an infiltrator. She was a lost soul who fell in with the Flamekeepers and even thrived with the more benign rank and file of the group. It is only when she stumbles across much more sinister activities that she realizes she needs to become an informant,” Smith said.

She thus can vouch for Lukasz, who’s more familiar with infiltrating unseen but now has to work under constant scrutiny, all while knowing his life and Alecia’s are on the line.

“As far as Lukasz’s vulnerabilities, it comes directly from one of his greatest, and most human, strengths. At heart, he’s a sucker for a damsel in distress, and it is the knowledge of Alecia at risk that draws him into the mission in the first place,” Smith said.

To balance the dark themes and suspense in THE FLAMEKEEPERS, Smith deployed some of the humor for which he’s been praised in previous books.

“Humor can be a great tension breaker and it is a coping mechanism for some of my characters,” he said. “On the other side, I like writing villains with dark senses of humor. They get to break the rules and humor is one way to illustrate that they are having a blast flouting the rules of society.”

With THE FLAMEKEEPERS completed, Smith doesn’t rule out more adventures for Lukasz. “This is the first novel with him as the central hero. He does play a significant supporting role in my novel, A NOBLE CAUSE. I really enjoy the character and since he’s easily bored it’s not hard to imagine he could find new trouble.” 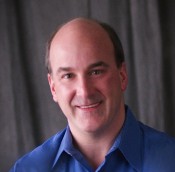 Greg Smith is the bestselling author of the thriller, A Noble Cause and the Paul Chang Mystery series including Final Price, Legacy of the Dragon and Send in the Clowns. Prior to writing fiction full time, Greg worked in public relations in Washington, D.C., Philadelphia and Wilmington, Delaware. He has an MBA from the College of William & Mary and a BA in English from Skidmore College. His debut novel, FINAL PRICE, was first released as a self-published work before being signed to Amazon Publishing in November 2010. Since then Greg has been working with Thomas & Mercer.