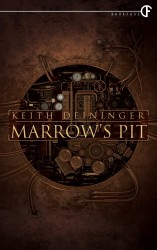 If you’ve had more than enough of vampires and werewolves, you may be ready for MARROW’S PIT, a tale of real dystopian terror from horror-master Keith Deininger.

The setting for this shocking story is called “The Machine,” a huge construct built to enclose an entire range of lifeless mountains.  An entire society exists within the vast halls and endless corridors of this clanking environment, living day-to-day with the sounds of squealing gears, hissing steam, and grinding metal.  Countless generations have come and gone within this mechanical beast, but this story focuses on one citizen, a man named Ballard.  Unlike the protagonist in most thrillers or even horror novels, Ballard is no hero, according to his creator.

“He’s a normal guy,” Deininger says, “a working-class Joe; at least he’d like to be. The problem is that, because of his father, he’s seen a bit more of the world than most citizens of the Machine. He’s poisoned by thoughts of the world outside the Machine, of possibilities.”

It is these thoughts that drive him to question things, making him an outcast from his society. Ballard sees the Machine as a tedious place, filled with ignorance and cruelty. His mundane job seems pointless and he secretly questions the purpose of the Machine.

Most of Ballard’s fellow inhabitants work, live and die within the Machine. Much of how it came to be or what its original functions may have been are lost in the mists of time.  Those inside work by blind faith, in fear of and in reverence to the Machine.

Ballard has been one of them, but when tragedy strikes he is forced to brave a journey that takes him outside of the Machine. He leaves behind everything he has ever known to face Marrow’s Pit. But the real story is not about demons or a bogey-man Ballard must battle.

“In many ways, MARROW’S PIT is about Ballard’s internal struggles,” Deininger says, “a sort of psychological war within himself. In fact, one way to read the piece, the dichotomy between the Machine and Marrow’s Pit, is as a representation of Ballard’s mental state.”

The story does offer more overt conflict.  Challenging the status quo forces Ballard to face opposition from his wife and the blind followers of the Libro Machina—the “bible” of sorts that talks of worshiping the Machine.

Deininger’s fiction is known for its relentless pace.  He says he keeps things moving by cutting back on what he calls the “literary bloat.”

“I’ve been focusing on story,” Deininger says, “because story is the most important thing. For MARROW’S PIT, I wanted to tell a disturbing, fast-moving story with hints of a larger world at its fringes, perfect for a novella-length piece. I trimmed my prose down to the essential scenes and I think it makes for an exciting read, very much a thriller, even if it’s weird and surreal and horrific.”

Driven by a need to create and imagine, Deininger is an award-winning writer of both dark fiction and poetry.  He reveals a surprising connection between the two disciplines.

“I really enjoy the manipulation of words, some of the more unusual things one can construct. I think my years of studying and writing poetry have very much informed my writing ‘voice.’ Writing good horror requires a subtlety of language, an ability to manipulate words in such a way as to create a sense of foreboding, dread and disquiet, and writing poetry, I have found, is an excellent exercise.”

A thrilling read on its own, MARROW’S PIT may be the tip of a future iceberg.  While we may or may not see Ballard again, Deininger already plans to revisit the Machine, which, he says, belongs in a greater mythology of which he has only begun to scratch the surface.

So, if you like dark fantasy with a literary feel and a bit more depth than today’s “monsters,” sample MARROW’S PIT and be prepared to be shaken. 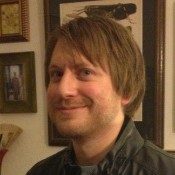 An award-winning writer and poet, Keith Deininger is the author of The New Flesh, Fevered Hills, Marrow’s Pit, and Ghosts of Eden. He grew up in the American Southwest and currently resides in Albuquerque, New Mexico with his wife and their four dogs. He is a skeptic and a bit cynical.