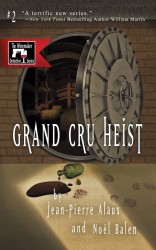 After Treachery in Bordeaux, here is another Epicurean whodunit set in French wine country. One winter day in Paris, renowned wine critic Benjamin Cooker’s world gets turned upside down when his car gets highjacked. He loses his treasured tasting notebook and his feeling of safety. To recover, he retreats to the region around Tours, sure that the wine and off-season calm will restore is sense of self. There a flamboyant British dandy, a spectacular blue-eyed blond, a zealous concierge and touchy local police disturb his well-deserved rest. From the Loire Valley to Bordeaux, in between a glass of Vouvray and a bottle of Saint-Émilion, the Winemaker Detective and his assistant Virgile turn PI to solve two murders and very peculiar heist. Who stole those bottles of grand cru classé?

“I love good mysteries. I love good wine. So imagine my joy at finding a great mystery about wine, and winemaking, and the whole culture of that fascinating world. I can see myself enjoying many a bottle of wine while enjoying the adventures of Benjamin Cooker in this terrific new series.” —William Martin, New York Times bestselling author of Back Bay and The Lincoln Letter

“A fine vintage forged by the pens of two very different varietals. It is best consumed slightly chilled, and never alone. You will be intrigued by its mystery, and surprised by its finish, and it will stay with you for a very long time.” –Prize-winning, bestselling author Peter May

“A series that is both delectable for connoisseurs of wine and an initiation for those not in the know.” —Marine de Tilly, Le Figaro

Translator Anne Trager loves France so much she has lived there for over a quarter of a century and just can’t seem to leave. What keeps her there is a uniquely French mix of pleasure seeking and creativity. Well, that and the wine. She founded Le French Book to translate the country’s top mysteries and thrillers, so they can reach new readers. The company’s motto is “If we love it, we translate it,” and Anne loves crime fiction, mysteries and detective novels. The Winemaker Detective series was on of her first choices. Author Jean-Pierre Alaux is a magazine, radio and television journalist when he is not writing novels in southwestern France. He is a genuine wine and food lover and the grandson of a winemaker. For him, there is no greater common denominator than wine. He gets a sparkle in his eye when he talks about the Winemaker Detective series, which he coauthors with Noël Balen. Noël lives in Paris, where he shares his time between writing, making records, and lecturing on music. He plays bass, is a music critic and has authored a number of books about musicians in addition to his novel and short-story writing.