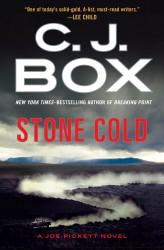 In C.J. Box’s new thriller, STONE COLD, everything about the man is a mystery: the massive ranch in the remote Black Hills of Wyoming that nobody ever visits, the women who live with him, the secret philanthropies, the private airstrip, the sudden disappearances. And especially the persistent rumors that the man’s wealth comes from killing people. Joe Pickett, still officially a game warden but now mostly a troubleshooter for the governor, is assigned to find out what the truth is, but he discovers a lot more than he’d bargained for. There are two other men living up at that ranch. One is a stone-cold killer who takes an instant dislike to Joe. The other is new—but Joe knows him all too well. The first man doesn’t frighten Joe. The second is another story entirely.

C.J. Box utilizes the Wyoming landscape to create compelling stories, and his novels are some of the best thrillers currently being published.  If the situation is dire, Joe Pickett should be the first person to call.

THE BIG THRILL spoke to C.J. about his new book, STONE COLD.

What sparked the idea for Stone Cold?

I get ideas from all over, from headlines to snippets of conversation.  Several years ago, I met a third-generation family who ranched in a very remote (at the time) section of Wyoming.  They told me it was common knowledge that a local rancher had a lucrative side job as a professional hit man.  According to the family, the hit-man rancher would fly off in his private plane and return a few weeks later loaded with cash.  The locals kept it quiet, though, because the rancher was a great benefactor to the community.

I can’t prove that the story is true, and in the end it’s not that important.  But there was a seed of an idea there that grew into STONE COLD.

Why did you decide to age Joe Pickett and his family in real time?

I’m a reader too, and I get weary of series when the characters don’t ever seem to age or when the horrendous events of Book 14 aren’t even referenced in Book 15.  In my view, we ask readers to suspend disbelief as it is with our protagonists participating in adventures in every book.  I try to offset that a little with realism.  For me, realism means having my characters age and learn from what’s happened in the past.

Do you prefer writing stand alones or continuing Pickett’s adventures?

I like them both which is why I do it.  Stand-alones allow me to stretch my wings and write about topics that wouldn’t fit well in the Joe Pickett series.  Or to set the book outside of Wyoming—where Joe Pickett operates.  I do love the series, though, and I’m always eager to get back to it.

How do you utilize the landscape of Wyoming as a character in your books?

Again, I think using the landscape and the weather is simply a nod to realism.  Joe Pickett is a game warden, which means he spends most of his day outside.  The country is his office.  Plus, the novels take place in states like Wyoming, Montana, and Idaho where there are vast stretches of open landscape and where the environment is a dominant factor in every human action.

STONE COLD: STORIES FROM JOE PICKETT COUNTRY will come out in late July this year.  It’s an anthology of my short stories.  Some have appeared in other publications or as limited-edition stories, but some have not.   I’m excited about it.

“Exhilarating…Unlike your standard-issue action hero, the canny Joe uses his wits, taking time to assess the literal and figurative lay of the land.” ~PUBLISHERS WEEKLY

“VERDICT: With each book, Box just gets better. Nonstop action, a twisty plot, and great characters make his latest a must-read for fans of this series.” ~LIBRARY JOURNAL

C. J. Box is the New York Times best-selling author of eighteen novels including the Joe Pickett series. Box won the Edgar Award for Best Novel as well as many other awards. Over 3 million copies of his books have been sold in the U.S. alone, and they’ve been translated into 27 languages. His first novel, Open Season, was a New York Times Notable Book. He lives outside of Cheyenne, Wyoming.

To learn more about C.J. Box, please visit his website.