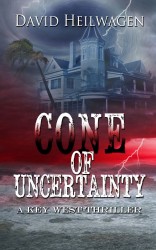 Fleeing a violent husband and a dying marriage, Amanda Brougher abandons her life in Nashville. Driving through the night, she eventually lands in Key West, Florida.  It’s here Amanda hopes to find the tranquility needed to restart her life managing a small island inn.  But Amanda’s plans begin to unravel almost as soon as she arrives.

Paul Brougher isn’t about to let his wife leave so easily.  As soon as he discovers she’s left, Paul embarks on a deluded quest to hunt her down. Plus, the inn’s elderly owner has died unexpectedly, leaving Amanda now without a job or a place to live. The owner’s son, Brock Hamilton, is putting the inn up for sale.  A veteran U.S. Coast Guard Officer, Brock is trying to come to terms with his own shattered past.

Now, with a major hurricane barreling toward Key West, and a deranged ex-husband quickly closing-in, two lost souls turn to each other for comfort and security.  A spark ignites and the flames of romance quickly consume them, setting into motion a chain of events that takes both of them on a life-changing journey of danger, intrigue, and self-discovery.

David Heilwagen survived nearly thirty years as a police officer on the streets of Indianapolis. He retired in 2008 with the rank of Sergeant. Out of his love of reading and writing fiction came his first book, CONE OF UNCERTAINTY.

David grew up in the Indianapolis suburbs of Lawrence, Indiana. He studied at Vincennes University and the Indiana University School of Journalism. He has written and published several travel articles on the Florida Keys, as well as hiking and snowshoeing in Colorado. David lives on the South side of Indianapolis with his wife, Julie, and daughter, Tara. When Indiana turns cold, David can be found on his sailing vessel, Wind Bandit, cruising somewhere in the Florida Keys.

I had a chance to catch up with David and ask him a few questions.

Is there anything special you’d like to tell us about CONE OF UNCERTAINTY?

CONE OF UNCERTAINTY is a romantic thriller set in Key West, Florida and Nashville, Tennessee. It’s fast-paced, alternating point-of-views between several of the main characters.  I wrote the novel in short chapters (74 in 72,000 words).  By doing this I wanted to increase the sense of urgency and pacing while quickly moving the story along.  So far, readers have responded positively to the short chapters.

Having visited Key West and the Keys several times over the past fifteen years, I always dreamed of writing a novel set here.  Actually, I started with the title and went from there.  During the last hurricane season, the weather people always talked about the Cone of Uncertainty when tracking hurricanes.  I thought, wow, that would be a great title for a book.  I sat down and began to write, letting the plot and characters kind of go off in whatever direction they pleased.  I was more or less just there to record their story.  Seventy-four-thousand words later, CONE OF UNCERTAINTY was born.

Right now, CONE OF UNCERTAINTY is only available in ebook, so I am focusing my marketing using various social media sites. Facebook, Twitter, Pinterest, just to name a few.  I produced a book trailer that can be seen on YouTube.  The paperback edition will be available this summer.  My agent is trying to get it placed in several South Florida bookstores.  I’m sure if that goes through, I will be down there promoting it with book signings and media interviews.

CONE OF UNCERTAINTY is the first book in what I hope to be a series of Key West Thrillers.  Each book will stand alone, with maybe some recurring characters, I haven’t decided yet. My second novel, also a Key West Thriller, is SAFE HARBOR.  It is in the hands of my agent, Tracy Brennan of Trace Literary, and she has it out on submission.

I love to sail up and down the Keys.  I just returned from a three week trip where I sailed around Florida Bay, anchoring at night in the lee of a mangrove island.  It’s very peaceful and does wonders for my psyche.  I also took along my laptop and was able to get some writing done as well.  I plan on going back to the Keys the end of February for another sailing trip.  My goal is to sail from Miami to Bimini Island, a distance of fifty miles.  Summer is the best time to do this since I will be crossing the Gulf Stream and that can be tricky.

“This was a WONDERFUL novel. I read it in one setting, supper had to wait, due to me wanting to know how Amanda’s life will turn out. This is a fast paced, thriller from the beginning to the end.”—KINDLE BOOK REVIEW

Your novel looks terrific, David.  I look forward to reading it. 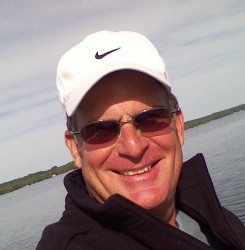 David Heilwagen survived nearly 30 years as a police officer on the streets of Indianapolis. He retired in 2008 with the rank of Sergeant. Out of his love of reading and writing fiction came his first book, CONE OF UNCERTAINTY.

David grew up in the Indianapolis suburbs of Lawrence, Indiana; graduating from Lawrence Central High School. He studied at Vincennes University and the Indiana University School of Journalism. He has written and published several travel articles on the Florida Keys, as well as hiking and snowshoeing in Colorado. David lives on the Southside of Indianapolis with his wife, Julie, and daughter, Tara. When Indiana turns cold, David can be found on his sailing vessel, Wind Bandit, cruising somewhere in the Florida Keys.

To learn more about David, please visit him on Facebook.