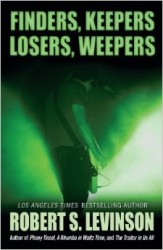 In his eleventh novel, Robert S. Levinson has crafted a thrilling, moving and very entertaining story. FINDERS KEEPERS LOSERS WEEPERS has enough twists and turns to keep even the sharpest mystery fan guessing to the end.

The story kicks off in 1989 when rock star Nat Axelrod is jailed on a bogus rape charge. He turns up nine years later searching for the girl whose false story landed him in prison. Nat’s life may drive this story, but Levinson wouldn’t describe him as a protagonist, but rather, as the catalyst.

“A crippled rock star, Nat’s release from prison sets him on a journey in pursuit of a lost love and brings into his orbit a diverse cast of characters—good, bad and evil—but none without sin and a few past redemption,” says Levinson. “Is Nat a hero? No, but he takes on something close to heroic proportions.”

The book is set in Indianapolis, but it is the music industry that really serves as the backdrop for this drama. In Levinson’s hands it shapes up to be a dangerous place where betrayal is a constant. Levinson comes by that view of the business honestly, through personal experience.

“I write as someone who trafficked in that business for a couple decades with labels, artists, and various organizations—an insider operating at the highest levels,” Levinson says, “giving me a ‘write what you know’ perspective that lets me play with details and descriptions beyond what might show up if I depended mainly on research and a civilian’s concept of what the people in the business were all about and how they operated.”

Levinson’s true-to-life portrayal of the music industry is not all happy talk and pop songs. In fact, this novel—his eleventh—is a bit darker and more hard-boiled than any of his previous books. He says it’s the toughest read he’s ever turned out—which was in fact his intent. However, being a seat-of-the-pants writer, not an outliner, he couldn’t know exactly where this story would lead him until he was into it.

“Going in I knew I’d start the story with Nat and his arrest for rape,” Levinson says, “but the ending I’d imagined at the time was nowhere near where Nat and the story wound up. There were similar surprises involving other prominent characters in a tale told from four points of view.”

That just means that as interesting as Nat Axelrod is, he’s not the only important character in this tale. Laurent Connart also drives the story, and readers will become quite involved with her.

“She’s a journalist tracking him to score a big payday,” Levinson explains. “Nat doesn’t know she exists through much of the story.”

Readers will also be drawn to Danny Manings, the record company executive responsible for Nat’s breakout career. While that created a bond between them that Danny continues to relish, Nat has no interest in reestablishing that bond. Does that make him a bad guy? Not in the traditional sense.

“Neither of them is the villain of the story,” Levinson asserts. “Nat’s more a tortured soul. Danny just might be a knight in shining armor trying to find Nat and rescue him from himself.”

Each reader will draw his or her own conclusions about Danny, but all will enjoy the ride through this book. At its core it boils down to the basic battle between good and evil, but it’s the characters that make it shine. In the author’s own words:

In FINDERS KEEPERS LOSERS WEEPERS the twists and surprises come with increasing frequency as the story progresses. It’s sure to keep you rooted right to the last page.

Robert S. Levinson is the bestselling author of ten prior mystery-thriller novels, among them PHONY TINSEL, A RHUMBA IN WALTZ TIME, THE TRAITOR IN US ALL, WHERE THE LIES BEGIN, and ASK A DEAD MAN. His short stories appear regularly in the Ellery Queen and Alfred Hitchcock mystery magazines. He was cited three years running in the EQMM Readers Poll. He is a Derringer Award winner, a Shamus Award nominee, and his stories have appear in “year’s best” mystery anthologies eight consecutive years.