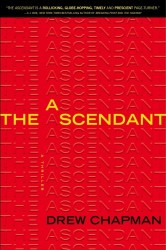 Drew Chapman recently answered some questions for THE BIG THRILL about his new novel, THE ASCENDANT.

Give us the elevator pitch for THE ASCENDANT.

THE ASCENDANT is about a twenty-six-year-old bond trader—Garrett Reilly—whose specialty is pattern recognition. He makes his money tracking the flow of money on Wall Street. At the beginning of the book he discovers that someone is selling off massive amounts of U.S. Treasuries to attack the American economy. Then he discovers that it’s the Chinese. After an attempt on his life, he realizes that there is an invisible war going on between the U.S. and China. That war is economic, cyber, and psychological. The U.S. military recruits Garrett to help them fight that war, but the thing about Garrett Reilly is that he has a subversive streak a mile wide. You can ask him to do whatever you want, but there’s no guarantee he’ll actually help you, and therein lies the fun of the novel.

So is Garrett Reilly more Anti-hero than hero?

He’s both. I wanted to create a main character who represented a new generation of Americans. People in their twenties who have been raised with these concepts of the American dream—upward mobility, a government you can trust—but who are finding that those things aren’t a given anymore. You can’t necessarily make as much money as your parents, and your government sometimes lies to you. Edward Snowden is a great example of that generation. It fascinates me that half the country thinks he’s a hero, and the other half thinks he’s a traitor. People should feel the same way about Garrett Reilly. At the beginning of the book he’s out solely for himself. By the end, he might actually become a patriot…Or he might not.

Where did you get the concept of invisible war?

It came to me when I was reading about the Stuxnet virus that the U.S. or the Israelis—no one’s sure exactly who—unleashed against Iranian nuclear enrichment facilities. I thought to myself—wow, if another country did that to us, we’d consider it an act of war. And then I realized that we were at war with Iran; blockading them economically, destroying the nuclear plants, assassinating their scientists…but it was a secret war. An invisible war. I became obsessed with that idea, and started looking everywhere for examples of it.

And did you find any?

Absolutely. All over the place. For instance, when I was doing research for THE ASCENDANT, one of the people I interviewed was the head of cyber security for a major U.S. power company. When I sat down with him he told me that my timing was perfect, because they’d just experienced the biggest cyber-attack against the North American power grid in history. I was floored, because I’d heard nothing about it. And I am a hardcore news junkie. This security expert said they hadn’t told the media about the attack because they didn’t want copycats, and more importantly, they didn’t want to freak out the American public. That, to me at least, was all the proof I needed. The invisible war was real.

Speaking of interviews, what other research did you do for this book?

I spoke to as many people as I could get my hands on. Economists, bankers, cyber security experts, computer programmers, military personnel, China experts. I sat on a bond trading desk for days, just listening to the way finance people speak. They have their own language. I travelled everywhere as well: Washington DC, New York, LA, Beijing, Shanghai, rural China.

Tell us about China.  That country plays a big role in the book.

I’m fascinated by America’s relationship to China. Here’s this country that we do a huge amount of trade with, whose economy is inextricably linked to ours (they hold $1.3 trillion of our debt), and yet they are not, by any stretch of the imagination, our ally. In fact, you could call them our primary global opposition. So these two nations are engaged in this complicated dance. Trade, diplomacy, aggression.And if either makes a misstep, the consequences could be enormous. Armed conflict enormous. Just look at China’s declaration of a no fly zone in the South China Sea, and then the American military response: we flew a B-52 right through that no fly zone. Talk about living on the edge.

You’re a screenwriter as well as a novelist.  Which are more fun to write, books, or scripts?

Well, screenplays have these arcane rules and structure that have been passed down from one generation of screenwriters to the next, and if you don’t follow them, you won’t get a lot of work in Hollywood. I understand the need for those rules, but they can get in the way of creativity. So for that reason, writing a novel was incredibly liberating. No rules, no structure, just tell a great story. Of course, screenwriting is in my blood, so I had to map out exactly what happened in the book way before I ever wrote a word. There were 3×5 cards all over my living room. I guess I am a prisoner of my habits.

Will there be a sequel to THE ASCENDANT?

Absolutely. I am halfway through it. Another geo-political hotspot will explode onto the world scene—invisibly, of course—and Garrett Reilly will be back on the case. Simon & Schuster would like to release it a year from now…so I’d better get back to work. 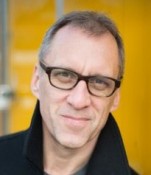 Drew Chapman grew up in New York City. He has written on numerous studio movies. He directed the indie film STANDOFF. Currently, he creates and writes TV shows for network television. Married with two children, Chapman divides his time between Seattle and Los Angeles.

To learn more about Drew, please visit his website.