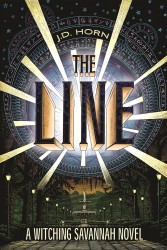 As Kathryn Leigh Scott of the old TV series DARK SHADOWS put it: “JD Horn weaves an intricate, gripping tale of magic and mysticism with the assured grace and lyricism of a seasoned novelist.”

To the uninitiated, Savannah shows only her bright face and genteel manner. Those who know her well, though, can see beyond her colonial trappings and small-city charm to a world where witchcraft is respected, Hoodoo is feared, and spirits linger. Mercy Taylor is all too familiar with the supernatural side of Savannah, being a member of the most powerful family of witches in the South.

Despite being powerless herself, of course.

Having grown up without magic of her own, in the shadow of her talented and charismatic twin sister, Mercy has always thought herself content. But when a series of mishaps—culminating in the death of the Taylor matriarch—leaves a vacuum in the mystical underpinnings of Savannah, she finds herself thrust into a mystery that could shake her family apart…and unleash a darkness the line of Taylor witches has been keeping at bay for generations.

What prompted you to write a story about a young witch?

Don’t get me wrong, THE LINE is intended to be an entertaining occult read, but to me story is less about witches than it is about family, and a young woman’s letting go, or being forced to let go, of her childish illusions.The fact that Mercy comes from a magical family is nearly extraneous. The supernatural is the spice of the story, the relationships among its deeply flawed characters the meat.

I have always been fascinated by the occult (at least in the realm of fantasy). DARK SHADOWS and THE NIGHT STALKER were among my earliest television favorites, and Stoker, Grant, Straub, and, of course, King led my poor mother to ask why I never wanted to read any “nice” books. I have also done a reasonable amount of reading (Valiente, Leland, Cunningham) about witchcraft as it exists in actual practice, and have especially enjoyed both the fiction and non-fiction of Dion Fortune.

Witchcraft has traditionally been associated (both in fantasy and in actual practice) with either the honorable religion of Wicca or outré devil worship. In THE LINE, I have attempted to deliver a fresh take on witches and magic by moving witchcraft beyond the purview of religion. I hope practitioners of Wicca will feel respected and enjoy THE LINE, but in the fantasy world of Witching Savannah, I attempt to widen the definitions of “magic” and “witch.” The witches of THE LINE have much more in common Keziah Mason than with either Diana Bishop or Fiona Goode.

According your bio you are very well travelled and have diverse sets of education and experience. How have these aspects of your life informed/influenced your writing?

It’s funny. I don’t see myself as being well traveled. There are just so many places I would like to visit, but have not as yet been. If anything, I would say that my travels to-date have given me an understanding of what it feels like to be an outsider, not only in the sense of being the kid picked last for baseball, but in the realization you are the alien. The world around you was not built for you. I certainly tapped into that sense when writing Mercy.

As far as my education goes, my undergraduate degree is in Comparative World Literature. These studies gave me a good grounding in much of the folklore you will find underpinning THE LINE. They also taught me to read works on many different levels. I hope readers will enjoy the Witching Savannah series for its surface story, but I also hope some will look for meanings on deeper levels.

Beyond that, I have an MBA and worked many years in Finance. This experience influenced my writing in that I understand publishing is a business. I had to come to terms with the fact that if I wanted my book to be published  I had to write a story intriguing to a wide enough base of readers to make it financially worthwhile for a publisher to do so.

How many books do you envision for the Witching Savannah series?

47North, my publisher, has contracted with me for three books. THE LINE is to be followed by THE SOURCE sometime around midsummer, and THE VOID in late fall. Of course, a lot depends on how well the series is received.I had always planned on the arc of Mercy’s story playing out over the course of the first three books. Readers will find THE VOID brings that arc to a satisfying conclusion. If there is sufficient interest in the series, I have at least two more installments simmering on the back burner.

And finally, the philosophical question that will reveal the true nature of your heart and foundation of your writing. If you were to describe yourself as a type of restaurant (diner, fine French cuisine, Chinese take-out, other?) what would you be and why?

I am an all-you-can-eat Indian buffet. My writing might be a little too exotic for some, too filling for others, but I got a lot of good things just waiting for those who share my palate. Please take a clean plate for each visit.

J. D. Horn was raised in rural Tennessee, and has since carried a bit of its red clay in him while traveling the world, from Hollywood, to Paris, to Tokyo. He studied comparative literature as an undergrad, focusing on French and Russian in particular. He also holds an MBA in international business and worked as a financial analyst before becoming a novelist. When not writing he is likely running, and he has race bibs from two full marathons and about thirty half marathons. He and his spouse, Rich, and their three pets split their time between Portland and San Francisco.