Ricky Bush’s thriller, THE DEVIL’S BLUES, opens when an explosion blows Jerry Roberts down the sidewalk of his church, and he finds himself charged with the mass murder of his entire congregation. Blues playing ex-reporter Mitty Andersen knows better and along with his partner in crime, Pete Bolden, he’s dead set on clearing his good friend’s name.   Their investigation reveals the existence of a para-military organization bent on wreaking havoc on the Christian world. They soon find themselves in the sights of the Soldiers of Satan, and they race against time to prevent further planned atrocities.

Richard “Ricky” Bush has listened to, written about, and played the blues most of his adult life. He has incorporated his passion for the music into his debut thriller, RIVER BOTTOM BLUES, featuring the blues playing, crime fighting duo of Mitty Andersen and Pete Bolden.  THE DEVIL’S BLUES continues their efforts to stomp out evil.

I had the chance to catch up with Ricky the other day and asked him a few questions.

Is there anything special you’d like to tell us about THE DEVIL’S BLUES?

I feel that both blues music fans and folks who enjoy getting a good thrill out of their books will get a kick out of Mitty Andersen and Pete Bolden’s latest escapade. Even though THE DEVIL’S BLUES represents their second adventure together, the book stands alone quite well.

I’d say a combination of events contributed to inspiring the plot line; threats by domestic terrorists, random and frequent church burnings across the country, the Branch Dividian tragedy, and the proliferation of zealot religious cults. Of course, in the case of THE DEVIL’S BLUES, the zealots are Satanists.

I’m well into the first draft of the latest episode featuring Mitty and Pete. The working title is HOWLING MOUNTAIN BLUES. Much of the action takes place in Belize, where the two travel for a blues music festival.

I have a blog that’s more related to blues music than writing. I post the occasional CD review and promote blues events (and my books). I play harmonica in a little trio once a month in a local coffee house and that tends to make me practice and keep my chops sharp. My two daughters have blessed me with a couple of wonderful little grand girls and grandsons, and my babysitting skills are tapped on a frequent basis. I love tailgating with friends and family at the Texas A&M Aggies’ football games (who are doing quite well this year).

Thanks Ricky.  Your book looks terrific and I look forward to reading it. 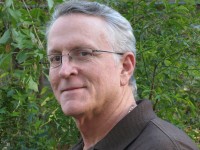 Richard “Ricky” Bush has listened to, written about, and played the blues most of his adult life. He has incorporated his passion for the music into his debut thriller, RIVER BOTTOM BLUES, featuring the blues playing crime fighting duo of Mitty Andersen and Pete Bolden. THE DEVIL’S BLUES continues their efforts to stomp out evil.

To learn more about Ricky, please visit his website.