A catastrophe in the making.

Can one man stop a global disaster?

Antarctica is the coldest, most isolated place on earth. Luke Searle, maverick glaciologist, has made it his home. But soon his survival skills will be tested to the limit by a ruthless mercenary who must win at any cost.

The white continent is under attack. The Australian team is being hunted down. Can Luke stay alive long enough to raise the alarm?

The countdown has begun.

I thought I was a good sailor until I boarded a ship not much bigger than a fishing trawler and crossed the notoriously rough Drake Passage to reach Antarctica. I have sea sickness pills strong enough to bring down a rhino, yet my breakfast swims around my stomach much as my fried eggs slithered back and forth across my plate, in sync with the lurching motion of the ship. I tell myself that if I can see the horizon, I will calm the nausea. So I head up to the bridge,but because of the ship’s cork-screwing motion through ten metre swells and sixty knot winds, I have to cling to the stairwell rails and haul myself upwards, occasionally slamming into the wall. 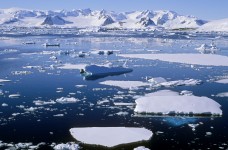 I reach the bridge and am horrified to discover that even though I am on the top deck,the windows look like the inside of a washing machine, as massive waves break across the bow and pound the glass. The Russian captain is unfazed by the ship’s bucking motion. I stay clear of him. He has two rules: if you are on the bridge, never sit in his chair, and do not enter the captain’s smoko area, which is just outside one of the two external doors to the bridge. Unfortunately, I cannot hold back my nausea any longer and charge for the nearest doorway to vomit over the railing. Embarrassed, I return to the bridge and overhear the captain muttering in Russian. I have desecrated his smoko area. Back in my cabin, I page through my Russian-English phrase book and discover it includes swear words– some of which I realise were just directed at me. I am fascinated by the Russian captain and his crew, and they have given me ideas for characters in my Antarctic thriller, THIRST.

For me to convincingly bring to life a story location as alien and dangerous as Antarctica, I want to experience it. If my hero –Luke Searle–is to outsmart a powerful and well-resourced adversary, I must understand the skills he will need. I have to know about station life, essential survival skills, crevasse rescue, emergency radio frequencies and polar first aid. What terminology might Luke – a glaciologist – use? How can I tell if a snow-bridge is masking a crevasse? Can an adult leopard seal really eat a person? This trip may not answer all of my questions, but the single most important part of my adventure is experiencing the harshness of the climate so I can imagine what my characters are feeling as I send them to Hell and back. So I am on my way across the Southern Ocean, full of excitement, regardless of my heaving stomach.

Why does this particular tale have to be set in Antarctica? I write stories about topics that fascinate me – in the case of THIRST, how the Earth’s fragile Polar regions play a vital role in regulating our climate. With around 70% of the world’s fresh water frozen in Antarctica, the impact of polar ice melting on global sea levels is potentially catastrophic. Antarctica is associated with heroism and intrepid adventure (think Scott, Mawson and Byrd) and if you want to isolate your hero and set a story in hostile terrain, what could be better than a frozen continent surrounded by impenetrable sea-ice? 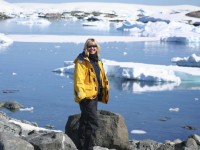 Once in Antarctica, I am struck by the colours: blue, white, grey and an inky black ocean. There is no green. The smell of ammonia from the penguin faeces burns my nostrils. The cold – even in summer – claws through my many layers of clothing and chills me to my core. Often, in the zodiacs, we cut the engine and enjoy the silence, occasionally broken by the roar of ice collapsing into the sea, the bark of a fur seal or the squawk of a penguin. I learn to keep my water bottle close to my body so it doesn’t freeze. I am dressed in a canary yellow parka so I am easier to find if I get lost or am caught in a storm. I discover that somebody must always know my whereabouts: that’s why turning a small numbered tag every time I leave, and return to, the ship, is critical. I begin to comprehend the isolation of station life, especially in winter when the sea ice cuts off all outside access. I am told of an Argentinian doctor who couldn’t bear to spend another winter of almost permanent darkness at Almirante Brown Station, so he burned it to the ground.

One particular day, the isolation, and how people might cope, was brought home to me. I am standing in the kitchen of a long wooden hut with green and white checked curtains, a jigsaw puzzle of an English village scene on the table, and a pair of long-johns hanging above the stove to dry. I flick through a WORLD SPORTS magazine, dated August 1953. I am on Detaille Island in a British hut abandoned in a hurry in 1959. The cold, dry air has preserved the building and its contents so well that it feels as though it was left only yesterday. I stare at an iron, fascinated that anyone could bother to iron clothes in Antarctica. I then realise that creating a little bit of England and keeping up appearances – hence the ironing – was the inhabitants’ way of dealing with the isolation. I take plenty of notes and photos, knowing this is a location I will use in my story.

I am lucky enough to be sailing with two inspirational people. The first, Jeff Rubin, author of Lonely Planet’s Guide to Antarctica, who is a treasure trove of fascinating information. The second, Luke Saffigna, is an Australian whose passion for Antarctica will be mirrored by THIRST’s central character. Since I am writing a thriller and about to unleash murder and mayhem on the unsuspecting inhabitants of my story’s Hope Station, we debate how governments might react to the first ever murder in Antarctica. The Antarctic Treaty bans weapons. So how might a station be defended against armed assailants? And how might one man, cut off from the outside world, stop a global disaster? To find out, you might just have to read THIRST. 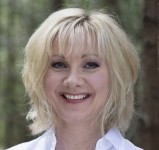 L.A. Larkin’s THIRST has been described as ‘The best Antarctic thriller since ICE STATION (James Phelan). She divides her time between writing thrillers and running thriller writing courses both in the UK and Australia. She lives in Sydney.

You can read more about L.A. Larkin’s books and her Antarctic adventures on her website.