Contemporary Thrillers
May 1, 2012
by Austin Camacho
0

Not every mystery is a thriller, but when a book is called terrifying, mesmerizing and pulse-pounding it’s bound to qualify.  All those adjectives fit SILENCED, the latest novel from Allison Brennan.  In this fast paced mystery prostitutes who cater to a high profile clientele are turning up dead all over Washington D.C. The story follows Lucy Kincaid’s efforts to learn who killed one high-priced call girl linked to a powerful Congressman.

Four books into a successful series, Lucy Kincaid is still a budding detective at the beginning of her career.  Still waiting to begin her training at the FBI Academy, she pursues her own crusade.  She’s a fascinating character, in part because she doesn’t like crowds, and isn’t comfortable in most social events.

“Her intense fear of being watched will benefit her as an FBI Agent because she has an acute sense of the world around her—she doesn’t need to see, smell, or hear something to know there’s a danger,” Brennan says.  “This makes her great as an investigator; not so good socially. Fortunately, she has her very fun and social boyfriend to balance out her seriousness!”

Lucy’s serious nature is driven by her tireless fight against cyber sex crime, a fight sparked by her own horrible experience.  Seven years ago – in Brennan’s earlier novel, FEAR NO EVIL, Lucy met a stranger from the Internet. She thought he was a 19 year old college freshman; in reality, he was a 38 year old predator who kidnapped and raped her live on the Internet.

Her drive to fight predators has compelled her to join the FBI.  Other writers would probably pick up her story years later, but Brennan’s inspired decision to follow Lucy’s adventures before she is a trained FBI agent makes perfect sense.

“I wanted to create a character readers could identify with and who would grow over the series arc, from a smart, driven but doubtful recruit into a confident, respected agent,” Brennan says.  “There are a lot of characters out there who already have a few years experience; I wanted to do something a little different.”

The story unfolds in such a way that current readers will enjoy the over-arching growth of Lucy’s character, while new readers will also get a complete story, and understand the back story without having read the previous books.  Brennan also proves in this book that she has mastered the art of suspense, even if she uses a deceptively simple technique for it.

Washington DC where Lucy lives is a great setting for intrigue.  The story in SILENCED has a congressional component – the first victim, found dead in Rock Creek Park, is the well-known mistress of a powerful congressman.  Lucy’s investigation in SILENCED takes her from an underground network of prostitutes to the chambers of the some of the most powerful men in the country as she confronts an unknown enemy who seems to stay one step ahead of her.  DC definitely fits for this story, but Lucy won’t be stuck there forever.

“I actually never planned for the series to be set in DC,” Brennan says.  “Of the first four books in the series, only #1 and #4 are set in DC.  And after Lucy graduates from the FBI academy she’ll be moving wherever she’s assigned.”

That’s the future, but first Lucy must find and protect the only witness who can identify the killer and end the conspiracy, even though that puts her directly in the line of fire.  With so much action and suspense, SILENCED is a mystery novel that deserves to be called a thriller too. 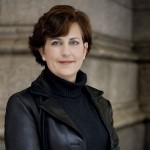 Allison Brennan is a New York Times and USA Today bestselling author of eighteen books and many short stories. Reviewers have called her books “terrifying,” “mesmerizing,” “fast-paced,” “pulse-pounding,” “wonderfully complex,” “layered,” and “a master of suspense.” She’s a five-time RITA finalist and Daphne du Maurier award winner. She lives in Northern California with her husband Dan and their five children.