If you love espionage thrillers you’ll be overjoyed to know that Jason Bourne is back to face another deadly conspiracy.  Eric Van Lustbader continues the adventures of the most popular American secret agent in ROBERT LUDLUM’S THE BOURNE IMPERATIVE.

In this one, Bourne gets a flash of deja vu when he fishes a drowning man out of a frozen lake. The man has almost died from a gunshot wound and when he comes to, he doesn’t remember a thing. Like Bourne in his first adventure, this man has no memory of who he is. More importantly, he doesn’t know who shot him or why.

That was how we first met this character in THE BOURNE IDENTITY, a novel that does not read at all like the start of a series. Lustbader confirms that Robert Ludlum never intended Jason Bourne to be a continuing character.  Today that is one of Lustbader’s challenges.

“When I agreed to take over Bourne I spent some time thinking about him in a new way, as a series character,” Lustbader says.  “I was well aware there would be many readers coming to the books I’d be writing whose first encounter with Bourne was the film version.  I felt I needed to align the new Bourne with their vision without either violating the original character or alienating [Robert Ludlum’s] legion of readers.”

So Lustbader moved Bourne’s family out of the picture, and used characters from Ludlum’s books at first to give readers a feeling of familiarity.  Beyond that, he had to adjust for the fact that the original Bourne books were written in the 1980s.

“The political climate was very different than it is today,” Lustbader says.  “I had to completely change the backdrop within which he operated.”

Lustbader seems happy to write in this world where, instead of just the USSR, there are so many potential enemies – both regimes and individuals – to write about.  And following Ludlum’s original lines, there is an international conspiracy in THE BOURNE IMPERATIVE.

“The character of Maceo Encarnación is the main villain.  This allowed me to set some dark and wonderful scenes in Mexico City, a place of terror in my early teens, and a place I wanted to write about for some time.  But as always happens in a Bourne novel, there are many layers to be unpeeled, so someone is set up as the villain for the next novel, and he’s a doozy.”

One reason Lustbader was the right author to pick up the Bourne series is that he was eager to honor Ludlum.  The two writers were good friends.

“We met in 1980, the year THE BOURNE IDENTITY and my own THE NINJA became bestsellers,” Lustbader says.  “Bob loved THE NINJA and wanted to meet me.  We discovered that our respective heroes were very much alike, in terms of honor and loyalty.  We talked a lot about character development, construction of the thriller, and so on.  By the time I was asked to take Bourne over, I knew him inside and out.”

Unlike most fictional spies, Bourne is a loner, often at odds with government spy organizations.  But what makes him truly unique in spy fiction is his memory loss.

“At any moment, someone from Bourne’s past can pop up and he doesn’t know whether that person is friend or foe,” Lustbader says.  “This is anxiety-producing for him, but pure Nirvana for me.  The possibilities are endless.”

And with so many possibilities there is no way Lustbader will fail to keep the stories fresh.  He says he takes the long view when it comes to a series, always thinking a book or two ahead.

“Characters carry over from one book to another; Bourne evolves as they develop.  The secret to writing a series successfully is to create as complete a world as possible for your main character.  If you do that well, the world will force him to grow in an organic way.”

But of course, like the previous novels, Jason Bourne’s adventure isn’t the whole story.  Mossad agent Rebekah has gone off the grid looking for one villain, and Treadstone operatives Peter Marks and Soraya Moore are recovering from an attack by another.  They are partnered with a new agent who might be spying on them and the only way for them to know is for Bourne to learn the identity of the man he saved.

A corkscrew mystery filled with action featuring a unique but familiar hero served up by the NEW YORK TIMES bestselling author of 20 bestsellers.  That sounds like the formula for a great read, and I think ROBERT LUDLUM’S THE BOURNE IMPERATIVE is just that. 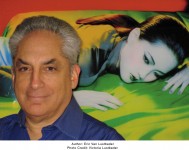 ERIC VAN LUSTBADER is most widely known as the New York Times bestselling author of twenty international bestselling thrillers including Ninja and Black Heart. He is also the author of two successful and highly regarded series of fantasy novels, The Sunset Warrior Cycle and The Pearl Saga. His novels have been translated into over twenty languages.