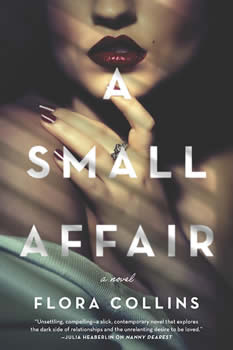 Flora Collins, the author of the successful debut Nanny Dearest, is back with an equally riveting psychological thriller, A SMALL AFFAIR.

When successful fashion magnate Vera McDonald meets Tom Newbern, an older, wealthy tech entrepreneur, on an exclusive dating app, she believes him when he tells her he’s in the midst of a divorce. She doesn’t question that the belongings of his wife and child remain in his home. However, the disparaging way Tom speaks to his wife on the phone is too much for Vera, and she breaks up with him after three dates.

Days later, Tom and his wife are found dead in their home, an apparent murder-suicide. The suicide note, which becomes public, blames Vera. As a result, she loses her job, most of her friends, and herself.

A year later, she tries to emerge from a cocoon of self-pity and re-enter the world, but the stench of scandal still clings. When the wife’s sister contacts her and invites her to a memorial service, she sees an opportunity to redeem herself. But as she learns more about the family, the couple, and their friends, it soon becomes apparent that there is more to the story than an affair gone wrong. This inner circle of filthy-rich tech millionaires will do anything to protect their own—and Vera can only find redemption if she uncovers their twisted secrets. 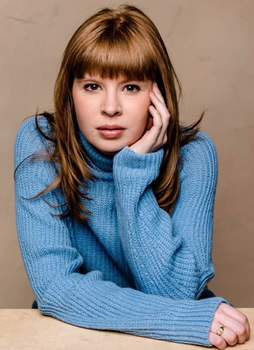 Collins says she loves the “choose your own adventure” aspect of writing fiction, a chance to “play God” with no real-world consequences. She’s been writing since childhood.

“I grew up reading a lot of chapter book authors at a fairly young age—R.L. Stine, Lois Duncan, and Mary Downing Hahn were some favorites—so I was always drawn to that craft,” she says. “One could say I ‘began’ my career by writing short stories; however, as a teen, I wrote many flash fiction thriller pieces and attended workshops in high school and college on crafting the short story. Then, as I got older, I realized the commercial value in novel-writing.”

Her family was a big influence. “My parents are both art historians—my dad teaches at Parsons, and my mom used her art knowledge to pivot into journalism and fashion,” Collins says. “I’d say they both taught me to be keenly observant, a very active listener, and to always ask a lot of questions. Therefore, I try to treat any new social setting I’m in as an anthropological experience, to glean details to put in my work later on. I think this skill has very much helped me fine-tune the depth of my character development.”

Anyone familiar with the New York art and fashion scene will wonder if the characters in her books are based on real people. “I wouldn’t say any one character is inspired by someone I know in real life, but some are amalgamations of people I’ve met.”

Her first novel-length manuscript wasn’t published, but her second, Nanny Dearest, sold in a two-book deal. Then came A SMALL AFFAIR. “I’m not going to lie; it was difficult to turn around an entire novel in one year (which was required under the contract). I nearly lost my mind doing it, but I’d say discipline was the main way I addressed that issue,” she says. “No matter how crazily busy I got, I forced myself to write 2,500 words a week, even if I knew those 2,500 words would eventually be deleted.”

Employed in tech marketing, she works Monday through Thursday and writes on Fridays and weekends in her Brooklyn Heights apartment or in coffee shops. When the pressure is on, she retreats to an Airbnb in Upstate New York. Her process is organic. “I never know where my writing will take me,” she says.

But she does know where some of her ideas come from. A SMALL AFFAIR was inspired by real life. “The Chris Watts story, detailed in Netflix’s American Murder: The Family Next Door, actually inspired this story,” she says. “Watts horrifically murdered his wife and children, in part so he could be with his (unassuming) mistress. I remember watching the documentary with a friend in 2020 and exclaiming, after watching the mistress be interviewed, that I wanted my next book to be from her perspective.” 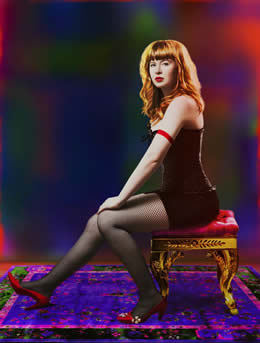 Other female characters in the book also stemmed from real life. “I attended a prestigious all-girls private school on the Upper East Side of Manhattan for 13 years. I have a lot of good things to say about my education there, but some of my classmates were really vicious,” Collins says. “I’ve always heard the adage that mean girls in high school will end up miserable, saddled with children they don’t want, and dead-end careers. But that is just not the reality for me: the most cutthroat girls in my high school will basically be running the world in a few years, thanks to their privilege and education. With this in mind, I wanted to write from the perspective of a grown-up mean girl. Thus, Vera was born. This is not to say that I don’t admire some of Vera’s qualities—she’s ambitious as heck!”

In A SMALL AFFAIR, Collins alternates the time frame of the story between present day and years past to show how the characters came to be and what led up to the murder-suicide. Odilie, the wife, was influenced by her friend Peri.

“I wanted more than one voice to come in, and I had such a strong vision of Peri once I began to write about her, that her character kind of guided most of my Odilie chapters,” she says. “I think this structure lends more emotional texture to the plot. The reader gets to hear all sides.”

Collins lists some of the authors who have—and continue to inspire her. “I worship at the altar of Megan Abbott, but some other favorites off the top of my head are Ruth Ware, Sarah Pinborough, Gilly MacMillan, Jessica Knoll, B.A. Paris, and Courtney Summers.”

As she writes her third thriller, she tells aspiring writers to “keep on writing and do your market research. Read as much as you can in your genre. It really helps you absorb the right pacing and cultivate your own unique voice.”