Features, Latest Books, On the Cover
2 months ago
by Millie Naylor Hast
0 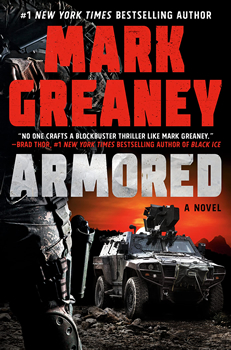 Duffy has been down on his luck ever since a mission in Lebanon went wrong, so when he’s recruited to protect Mexican and UN diplomats, he accepts the challenge. The diplomats’ goal is to meet with a homicidal cartel in the Sierra Madre mountains of northern Mexico to broker peace. The area is so dangerous, it’s known as the Devil’s Spine. Warring cartels aren’t the only danger Josh will face, as an even more sinister threat may prevent him from ever seeing his wife and children again.

The Big Thrill caught up with Greaney shortly after ThrillerFest to ask him about his electrifying new story.

“I got the idea way back in 2011,” Greaney says. It began as a screenplay that remained unfinished while he continued to write two books a year. “Audible came to me and asked for an original story to make a full-cast audio play. I showed them what I had and said I’d retool it for the audio play format. Once I had that contract, then I HAD to finish the story, and I finished that version in 2019, so it took about eight years to finish.

“Josh isn’t much like Court Gentry (the Gray Man) at all. He’s a blue-collar security officer and damn good at his job, but he isn’t a jet-setting spy or elite black ops commando. He’s just trying to make a living for his young family, and due to an injury sustained on an earlier job, his financial situation is dire. Josh takes a dangerous mission out of desperation, but he’s a good man who fights for what he believes in.”

Josh’s wife Nikki is more than a helpmate. “Nikki needed a job in which she could work nights, because she had to take care of the kids all day, so she started her own janitorial company,” Greaney says. “I wanted them both to have blue-collar jobs with limited potential for advancement. I did have this book pretty well planned out by the time I wrote it, and I wanted Nikki to be this Alpha-female former Army officer who is still a badass, no matter the life she’s been living since she left the military. I see the book as about Nikki as much as it is about Josh, so she will definitely play a key role going forward.”

Josh’s mission to protect the diplomats is anything but straightforward, which he soon finds out. “I put a lot of thought into not just the plot, but when and how to reveal things to the reader,” Greaney says. “The reader’s experience is the only thing that matters to me, so I love putting in those ‘ah-ha’ moments I know they will enjoy.”

Greaney has held an interest in cartel warfare for a long time—“ever since I wrote my third Gray Man book, Ballistic. I traveled extensively in Mexico and did a lot of reading. Parts of Western Mexico are completely in the hands of the cartels. Other areas are contested by the government, creating a sort of civil war. I had the idea that putting security contractors into that environment could make a taut thriller.”

Aspects of the characters on Josh’s protection team are drawn from real life. “I just take pieces from men and women I’ve met while researching. The tension and humor among members of security teams in high-threat situations is 100 percent real, and I tried to capture that. I’ve trained as a member of a team, and it’s a very unique environment.”

Greaney writes with enormous authenticity. “The training I’ve done with military personnel all took place at a commercial firearms/security contractor school, where members of the military as well as law enforcement take classes on different tactics,” he says. “I’ve also done some training with SWAT teams by playing an opposition force member in shoot houses, engaging them with high-velocity paint rounds. I’ve taken emergency action medical courses as well.”

He’s also developed some good sources. “Developing sources in the military takes time,” he says, “and it didn’t hurt that I was working with Tom Clancy.”

Greaney’s journey to publication began with his love of reading as a child. “At first, I only read nonfiction, but when I was about 19, I started reading Tom Clancy, Nelson DeMille, Frederick Forsyth, and John Le Carré. By about 22, I started writing a novel. I studied international terrorism, and I had a plot that I wanted to see if I could get down on paper. That was in 1990, and I didn’t finish it until 2005. In the next couple of years, I wrote two more books, but they were both rejected by publishers. The Gray Man was my fourth completed novel, but my first published.

“I’d wanted to be a writer since I was 21, and I got published at forty-two, so of course it was an incredible feeling to get published at all. I then sold the film rights, got a ghostwriting job, got a multi-book deal for The Gray Man, and started working with Clancy, all in less than three years. It was a whirlwind then, and it still is today, because I try to write two things a year, and now with the film, it’s a very busy time, but of course, I know how lucky I am.”

Greaney’s writing process begins with a short synopsis. “Then I put it aside and just start writing. For the book I’m working on now (book 12 in the Gray Man series), I’m mostly going by the seat of my pants to try something different, and that seems to be working, at least for this book.

“I take about six months to write a draft, and a few months more to edit it (while working on something else). I usually do three more drafts before it’s all said and done.”

He uses his pool house as his writing space. “I write seven days a week, usually in the mornings, and I like to start by six. As my life has gotten busier and busier, I find a lot of time filled up with the business and promotional side of writing. I try to limit my non-writing responsibilities to the afternoons.”

For aspiring writers, he has some advice. “Ignore everything other than the writing itself,” he says. “Don’t worry about formulating a series, don’t worry about having a career as a writer, don’t worry about pushing yourself out on social media . . . just work on your manuscript—every hour of work makes it better, every hour doing anything else is wasted time.”

In addition to the next Gray Man novel, Greaney is working on Josh Duffy’s next adventure. “There will be a second Josh Duffy novel, and Nikki will be an even more integral part to the story than she was in ARMORED.”

Since Greaney’s novels are based on real-world concerns, we asked him what we can gain from fiction that we can’t gain from the news. “A sense of justice, often,” he says. “Fiction can be a little ‘wish fulfillment’ sometimes because answers are given, problems get solved, and bad people get their just desserts.”

On the Cover: Jennifer Hillier