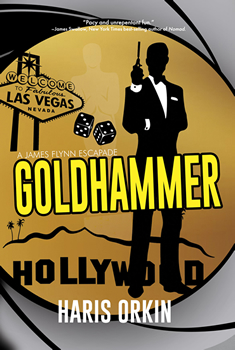 A young actress, involuntarily committed to City of Roses Psychiatric Hospital, plunges James Flynn into a dangerous new adventure when she claims one of the most powerful producers in Hollywood is trying to kill her.

Still convinced he’s a secret agent for Her Majesty’s Secret Service, Flynn springs into action, helps her escape, and finds himself embroiled in a battle with a dangerous sociopath worth billions. In the process, he uncovers a high-tech conspiracy to control the mind of every human being on Earth.

With the help of his reluctant sidekick, Sancho, and a forgotten Hollywood sex symbol from the 1960s, Flynn faces off with Goldhammer and his private army in a desperate attempt to save the world…once again.

The Big Thrill recently caught up with author Haris Orkin to gain some insight into his latest thriller, GOLDHAMMER:

Flynn’s central nemesis and what he does is based on a number of real people and things they’ve done. I spent twenty-five years working in Hollywood, so I have a very good understanding of the world and the business, the power dynamics and the characters, and I brought all of that to this story.

I’m someone who loves gritty thrillers and crazy comedy. Ian Fleming was obviously a huge influence. But so was Raymond Chandler and Elmore Leonard and Kurt Vonnegut and Joseph Heller and Richard Brautigan. After I reached a certain age, I realized that Fleming also saw the absurdity in what he was writing. A secret agent who tells everyone who he is wherever he goes.

Where is the line between sanity and insanity?

I don’t know. I believe every human being suffers some kind of delusion. Half this country now thinks the other half is delusional. Truth no longer seems absolute. Maybe it never did. Everyone is living in their own bubble. Their own reality. All the villains in my Flynn books function in society but are just as delusional in their own way.

Since this is the third book in the series, the main character was already in place, but the character of Flynn’s new nemesis was the catalyst for the plot, and he also dictated the setting.

I’ve always loved thrillers. I started reading Ian Fleming’s books when I was eleven. I loved the excitement and the escapism and the idea of a character who had no fear and was confident in any situation. The exact opposite of who I was as an insecure adolescent. I was also a big comedy fan and loved Monty Python and Mel Brooks and Kurt Vonnegut and Elmore Leonard’s more comedic thrillers.

The biggest challenge was creating a third book in an ongoing series. I wanted something that would stand alone and work whether you’d read the first two books or not. That was also the biggest opportunity because I could grow and deepen the characters and their world. Each book is its own thing, but there’s an overarching narrative from book to book that I’m slowly building.

The main plot in GOLDHAMMER was originally intended to be a subplot in another book, but it kept growing and expanding until I realized that my little subplot deserved its own book.

Haris Orkin is an author, playwright, screenwriter, and game writer. His play Dada premiered at The La Jolla Playhouse. A Saintly Switch was produced by Disney and directed by Peter Bogdanovich. His games have been nominated for the WGA Award and the BAFTA. His latest James Flynn Escapade will be released in June. He’s a native of Chicago and currently resides in Ashland, Oregon with his wife, Kim, and a tiny, bossy, rescue mutt named Penny.