Portrait of a Sociopath 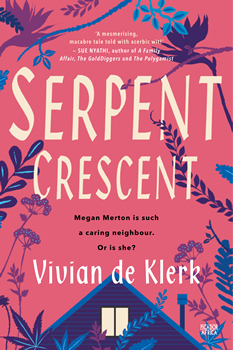 Vivian de Klerk had an impressive academic career at Rhodes University in the Eastern Cape for more than 30 years. When she retired, she turned to writing fiction, and her debut novel Not to Mention was widely acclaimed for its deep study of a hugely overweight woman being slowly killed by her mother. In SERPENT CRESCENT, she has focused on a sociopath who tells us her story in first person. Part of the attraction of the book is the in-depth look at how such a personality develops, but there are many twists and turns along the way.

Megan Merton lives in a crescent with nine houses. Each has its own story, and Megan has interfered with the lives of all the occupants (among others) for good or ill. But she’s careful. She keeps below the radar. No ostentatious serial killings for her. Then one of her neighbors, Elizabeth Cardew, who is a senior academic at the nearby university, has a stroke and is taken to a care home. Megan goes to see her, out of curiosity rather than sympathy, and an unlikely relationship forms between the two of them.

In this interview with The Big Thrill, de Klerk answers a few questions about her book, the rationale behind her choice of the main character, and where that led.

You specialize in unusual female characters. Megan Merton is a case in point. She’s a self-proclaimed sociopath, yet she has flashes of empathy, especially in her relationship with Elizabeth Cardew. What did it take to get into the mind of such a person?

Megan is a dark protagonist. I’m drawn to people living on the edges of society, people who would be regarded as abnormal in some way and was also fascinated with the idea of “schadenfreude”—the pleasure someone derives from another’s misfortune.  I believe most people have something to hide—sometimes very minor things, and sometimes huge and horrible experiences, and I wanted to create a sociopath who has a sense of humor, with plenty of her own secrets to hide.

In my research into sociopaths, the most fascinating aspect, for me, was their ability to hide their true selves behind a façade of normality. Supposedly callous and lacking any empathy or guilt, they have to practice carefully, from early childhood, how to cry, how to apologize convincingly, how to express feelings of any kind, because they need to blend into society as normal people in order to live their extraordinary lives. Megan recounts how she did this, and how she was careful never to shine at school (although she claims to be super-bright). Daughter of the local butcher, she uses well-practiced sexual guile to hook Charles Merton as a convenient husband and gets appointed as English teacher at the local school, which enables her to play the part of a local upstanding member of the small community of Qonda.

Once I had imagined various scenarios involving sociopaths, from the petty and trivial to the most serious imaginable, including rape and murder, I simply needed to work them into her memories of the people of Qonda, and particularly those who lived in Serpent Crescent. As the author, I enjoyed myself immensely.

Megan makes no bones about the pleasure she obtains from the misfortunes of others, especially if she’s instrumental in producing them. However, she likes to see herself as a righter of wrongs, and, indeed, usually picks on unpleasant people. Is this self-justification—hardly needed by a sociopath, I’d guess—or is it simply that she wants a purpose in her life?

Megan resents the descriptions that psychologists have given of sociopaths as callous, unfeeling, untruthful, etc., and this fuels her desire to set the record straight. She shows that she has righted many wrongs and feels intensely, experiencing envy, pride, anger, and especially schadenfreude—her righteous “zing” of pleasure when she sees that justice has been done.

A donkey wanders the street.

Megan displays a complex mixture of religiosity, driven by her familiarity with the Bible, Dante’s circles of hell, and St Augustine’s Confessions. The book is, in essence, a confession of sorts, in which she defends her actions and goes to considerable lengths to justify them. Yes, her purpose in life is to ensure that bad people get their come-uppance in one way or another, but often fate takes a hand before she can, which leaves her feeling a little cheated.

I wondered if she’s a reliable narrator. Although she’s quite explicit about some of her actions, fate seems to be unusually cooperative for her also. Would you comment?

Megan Merton is analytical and very honest about her feelings, and so one would like to believe her. But while she is careful to record the finer details of what she remembers, she makes the point (repeatedly) that she might have misremembered some things, especially when it comes to what happened to her baby brother Matthew in the swimming pool. So the reader cannot be sure either.

The dam littered with garbage.

And there are other clues to why the reader might have some doubts: She goes to some lengths to defend her “credentials” as a sociopath, regularly reminding the reader that she has no regrets, and no feelings (apart from schadenfreude), and yet she reveals sympathy for people who suffer abuse (like the mother and daughter living at number four), she defends people who are disabled, and she has concern for the elderly who are mistreated and for the poor. She worries about Mrs Stuart at number seven, and she forgives the town “flasher” for occasionally exposing himself. Despite initially going to visit Elizabeth Cardew out of callous curiosity, Megan is slowly drawn into the rhythm of helping with her therapy and surprises herself with unaccustomed feelings of compassion. Perhaps she’s not as bad as she makes out?

Elizabeth Cardew has her own chapters where she sees the world from a different perspective from Megan. After her stroke, she is bitter and naturally depressed, but over time, she becomes more understanding of both her situation and that of her colleagues. Is it her relationship with Megan that helps achieve that, or is her healing process both physical and emotional? 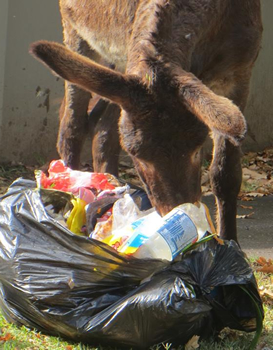 A donkey roots through garbage.

The relationship is not a balanced one, and initially Megan gets far more out of it than Elizabeth Cardew. In fact, Elizabeth has no memory of Megan at school—it is Megan who remembers her, and how, as a little girl, she was bullied by Stephen Quick (who conveniently fell in front of a train). Although they have been neighbors for some years, it was Megan, the snoop, who was fascinated by the loving relationship between the two women next door, and Megan who is later drawn to visit Elizabeth repeatedly in order to find out what a stroke victim looked like and maybe a bit more about Dante’s works. Elizabeth’s comments in her diary reveal that at first, she finds Megan decidedly odd, yet amusing, and fairly helpful in bringing her a few things from No 9: her laptop, her music, etc. Elizabeth’s physical and emotional healing is largely self-driven: she knows about aphasia, and what to expect in teaching herself to speak again, and she has already started her therapy before Megan arrives on the scene. In the beginning, Megan simply acts as a useful and uncritical sounding board, and later on, she becomes an amusing companion, and their unlikely friendship slowly develops from there. This no doubt also helps Elizabeth achieve her own “redemption.”

Qonda seems to be a town that is collapsing, and Megan observes that with distaste but no particular interest. Unfortunately, it’s quite believable for a small country municipality in the Eastern Cape. Did you base it on any particular place? 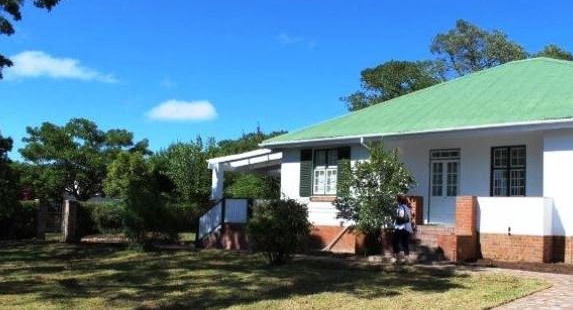 A house on Serpent Crescent, perhaps.

The dreadful state of Qonda (formerly Georgetown) is what brings Megan Merton to the point where she feels angry enough to “let it all out.” The choking smoke from the rubbish dump, the ever-deepening potholes, the dysfunctional post office, the dirt and squalor are all reminiscent, of course, of one of Dante’s circles of hell, and they make her feel angry. The setting is, unsurprisingly, closely based on Grahamstown, whose name was recently changed to Makhanda. (I grew up there, and subsequently lived there for 35 years.) It is also a small town which experiences regular electricity outages, where the water—if there is any—is of dubious quality, and where the smouldering rubbish dump releases toxic fumes. Donkeys and cows wander through the town, streetlights don’t work, and the potholes are even bigger than those in Qonda! I don’t think Megan would have written her personal account with such fervor or passion had she lived in a first world city where everything worked.

Both Not to Mention and SERPENT CRESCENT focused on a remarkable but disturbed character as narrator. Do you have another similar book in mind, or do you plan to try something with a rather different structure next?

I do have a similar book in mind, also based in Qonda (an irresistible setting) with another disturbed female character as the main focus. I find I am drawn to the darker side of life. But perhaps I need to lighten up and try something different? Time (and the publishers) will tell.