The Madness of No Sleep 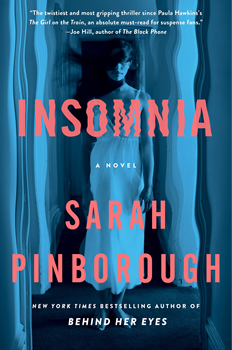 An estimated 70 million Americans are affected by sleep disorders every year, with chronic insomnia impacting a whopping 10 to 15 percent of them. But you don’t need an official diagnosis to understand how lack of sleep—even a few nights of restlessness—can affect your physical and mental health.

For Emma Averell—the protagonist in Sarah Pinborough’s twisty new thriller—her crippling insomnia has made her question whether she’s slowly going insane, like the mother she’s worked so hard to forget.

For years, Emma has happily balanced her life as a high-powered lawyer, mother to two beautiful children, and a relationship with her loyal, stay-at-home husband. But as her fortieth birthday nears and sleep becomes a thing of the past, Emma is plagued by childhood memories. Memories that remind her of the monster her mother had become—the monster she is terrified of becoming herself.

Is the madness “in her blood,” just as her mother predicted? Or have the effects of insomnia caused her to only think she’s losing her mind? Pinborough takes us deep into Emma’s damaged psyche in search of the answer.

In this interview with The Big Thrill, Pinborough delves deeper into the inspiration behind her new thriller and shares insight into why many of her books stretch just beyond the “believable.” 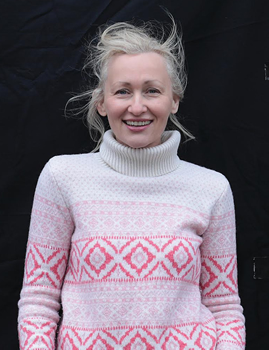 Was this story inspired by a particularly bad bout of insomnia? If not, what can you share about the novel’s genesis?

I get insomnia quite a lot and am a slave to sleeping aids, so I did want to write something about that, but a lot of the story came out of chatting with women friends about female guilt and trying to manage careers and families and being the main breadwinner often, but still having far more guilt about missing family stuff because of work. On top of that, during the pandemic (which isn’t part of the book at all—I know some people wanted to include it in their work, but I didn’t), it struck me how many women were doing the bulk of home-schooling, etc., on top of their own work, and very few were sleeping properly. So there was a mix of things that sparked the book.

I imagine you would have had to do quite a bit of research into insomnia while writing this book—what causes it, what feeds it, the consequences of prolonged lack of sleep, etc. Was there anything surprising in what you learned?

I did some for sure, and what really struck me was how quickly lack of sleep affects us and our sanity. You only have to miss a few nights’ sleep before hallucinations and paranoia kick in, and you start doing serious damage to your health. We worry about going without food and water, but lack of sleep is up there for being dangerous to you. 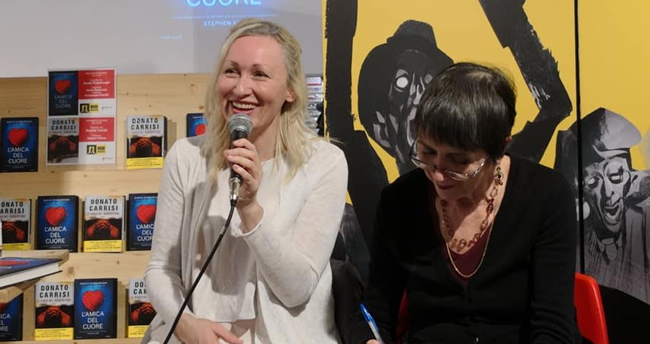 Your writing is immersive, and in INSOMNIA, it’s almost as though you changed your style a bit—a bit choppier, perhaps, to give a clearer picture of being inside the head of an insomniac. I’d love to hear a bit more about how you got into Emma’s head.

I tried to separate Emma into Day Emma and Night Emma. Anyone who’s ever had a few nights of no sleep knows how night times become a different landscape, and so we have Day Emma, who’s trying to hold it all together, and Night Emma, who thinks she’s going mad as she develops these strange tics. It’s definitely a pacier book, but I think that’s because there’s only one viewpoint. We’re in Emma’s head, and there’s no escape from that all the way through, which adds to the claustrophobia and paranoia. 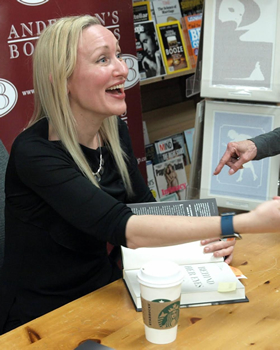 Pinborough signs copies of her 2017 bestseller Behind Her Eyes at a US event.

Speaking of Emma, she’s incredibly relatable. I love that one of the issues you explore is the pressure that comes when women try to balance a profession, family, and other relationships. Aside from a twisty read, what would you like readers to take away from this story?

I’m glad you think she’s relatable. I think she’s probably my most relatable female character thus far. I think it’s mainly an exploration of women’s fears of getting older and turning into our mothers—which is so odd because while we’re young, they’re so central to us, the centers of our universe. Then as we get older, we dread being like them. (A sweeping generalization, I know.) But it’s also about perspective and seeing past events and people from different angles as we age.

You take Emma to dark places, psychologically. There’s nothing more terrifying than feeling out of control, and no question sleep deprivation would impact that. What was the hardest scene to write from an emotional standpoint?

That’s a hard one to answer because I finished writing it a while ago. I don’t recall any overly difficult scenes, but finding the balance of her thinking she’s going mad at night with trying to be normal in the day was quite tricky. 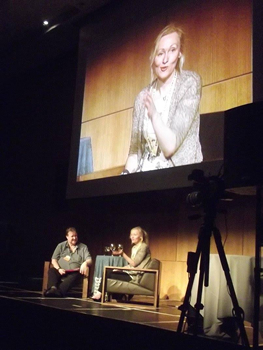 Pinborough on stage as the guest of honor at Mancunicon, a science fiction convention in Manchester, UK

Your books often include a nod to the supernatural, and that’s no different in INSOMNIA. Without giving any spoilers, of course, why are you drawn to the slightly “unbelievable,” and how do these moments influence your plotting process?

If there’s supernatural in a novel of mine, then it’s normally integral to the spine of the story, and everything is plotted around it. Clues have to be left along the way, the same as with any element of a thriller. I started out writing speculative novels (horror, supernatural historical crime, fairy tales, fantasy), so it’s in my blood to look for the weird. I’ll always be drawn to the idea of something just outside the corner of your eye.

You books never fail to take readers on a twisty, unexpected journey. Although I did guess a few things along the way, I didn’t see the end of INSOMNIA coming. The Big Thrill is as much for aspiring writers as it is for readers. What advice would you share for creating those unexpected twists and turns?

Well, it’s to each their own with writing methods and approaches, but I’m a great believer in getting the tent pegs of a story planted, even if you’re not a huge plotter. I have to have the ending firmly locked in place before I can start, and then I try to figure out two or three reveals and where they might be in the story, and then I work around that. The ending never changes. Everything else might as I go, but the ending, never. 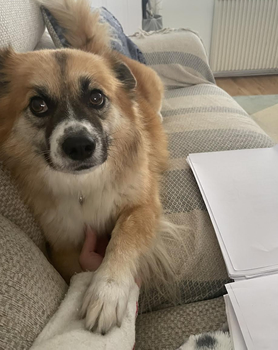 “My daily writing view,” says Pinborough, “which is on my sofa with my dog, Ted staring at me and wondering why I’m not constantly staring at him back.”

I loved the Netflix adaptation of Behind Her Eyes. What was that experience like for you as the author of the source material? This is not the first project to be optioned—has “Hollywood’s interest” influenced your writing at all?

It was great fun for me because they were so faithful to the book, and although I had nothing to do with the adaptation, I went to the read-throughs and on set, and got on great with the producers. So much so that I’m currently working with them on the INSOMNIA adaptation. I do a lot of screenwriting, so I think perhaps that has affected my novel writing more than Hollywood interest, per se. I’ve gotten pacier because scripts are so lean.

I’m still in mulling stages for the next book, playing around with various ideas to see what sticks. It will probably have some weird in it, though.