A Blizzard, an Isolated Vacation House, and a Sexy Lover—What Could Go Wrong? 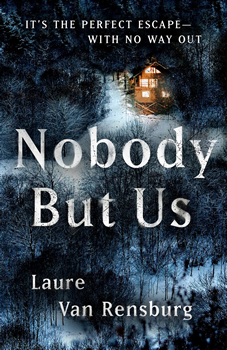 When NYU grad student Ellie and older Barnard College professor Steven take their first trip together, an idyllic weekend turns dark. Each learns the other harbors secrets, and one of those secrets is deadly. Instead of the romantic break by the sea they anticipated, they find themselves stranded in an isolated house near Chesapeake Bay during a snowstorm. As they realize neither of them is quite who they say they are, they discover that one of them won’t escape the weekend alive.

This is the premise behind Laure Van Rensburg’s stunning debut NOBODY BUT US.

Van Rensburg, who is French but lives in the UK, says she wanted to turn the trope of the younger woman/older man relationship on its head and shift the power dynamics of predator vs prey. “I carried the initial idea in my head for a long time, playing around with little scenes and what ifs. It’s part of my process,” she says. “I initially need to mull things over a lot and stitch scenes and situations together until a narrative emerges. It never comes all at once. One day, this scene came to me of this couple talking as they walked through the snow in what looked like a remote area. I kept going back to it, adding details, where they came from, where they were staying, etc.”

Feminism and women’s issues are a recurring theme in her work. “It’s hard to talk about specific inspiration because it can give away spoilers, but I drew some elements from my personal experience, which I talk about in the author’s note at the end of the book,” Van Rensburg says. “Also, a lot of it was inspired by situations I believe all women have experienced in one shape or another, and the anger of feeling powerless against it.” 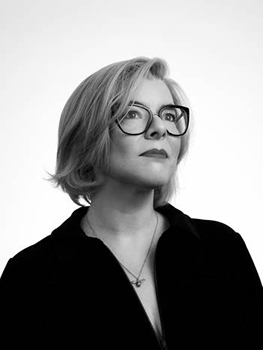 The book took about 18 months to write. “I’m an underwriter,” she says. “The first draft was roughly a mere 55,000 words, but the main bones of the story were there. I spent subsequent edits adding flesh to the bones and layers—digging deeper into existing scenes, adding more scenes, especially around Ellie and Steven’s relationship and their past. I have a critique partner and a couple of beta readers whom I trust, and their feedback helped when it came to editing and especially making sure I had the right clues in the right places. As the author it’s a hard thing to judge, because you know every twist and turn, but you’re never sure if you give away too much or too little. Their comments were invaluable in that department.”

Van Rensburg says she started with the characters. “Characters come more naturally than plot to me. The story usually evolves from there over time. I just find people fascinating.”

Plotter or pantser? Van Rensburg admits she does both. “I am a pantser who has learned to do some planning. I don’t plan my short stories at all, but with my novel I introduced some elements of planning, especially because writing psychological suspense needs to have a tight plot. I can’t plan everything, though. Some things I cannot work out until I write them. The planning really helps me with the edits. I plan my changes on a spreadsheet before I start cutting and pasting the manuscript. I had to do a lot of moving scenes around and splitting chapters to get the pacing right in this book!” 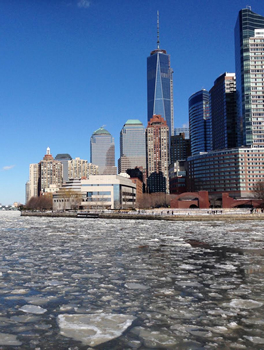 Van Rensburg took this photo of ice floes during a recent holiday/research trip to New York.

When I note how twisted Ellie and Steven are, Van Rensburg says, “Firstly, thank you! By the time I started writing I had a pretty good idea of who Ellie and Steven were, but I added layers and delved deeper into their psyche with each edit, like adding muscles and flesh to a skeleton. I like flawed characters, so there was no question Ellie and Steven would exist in shades of gray.”

The story is told from both characters’ points of view. “I knew from the start that Steven needed to have a voice. I was interested in exploring how he saw himself as the hero of his own story, and how he justified what he did. With Ellie, I always knew who she was and her motivations,” Van Rensburg says. “What evolved over time was her relationship with what she was doing and how it affected her. I like reading and writing flawed female protagonists. I hate the idea that a main character has to be likeable. For me, interesting and likeable are two completely separate traits.”

The isolated weekend getaway house also is a major character. “Setting is extremely important to me. I have to confess I’ve never been to Chesapeake Bay. Apart from a February trip to New York City and skiing vacations in France, inspiration for the setting came from Taylor Sheridan’s movie Wind River.”

Van Rensburg wanted readers to feel the danger from both inside and outside the house. “I didn’t want to look at the usual weekend in Connecticut or Vermont, so I decided to look south and remembered The Blair Witch Project and the Maryland woods. Looking on Google maps, I stumbled across Blackwater National Wildlife Refuge and felt it was remote enough for what I needed.”

“I’m a very visual writer,” Van Rensburg says. “So I watch it all happening inside my head as I type. I visualize the background, camera angles, zoom in or out, cinematography, and I try to relate all of that on the page to create an immersive atmosphere for the reader. I wanted to go against the convention of old creepy houses, which is why I decided to make the house ultra modern. Those modern floor-to-ceiling windows really bring the outside in.” 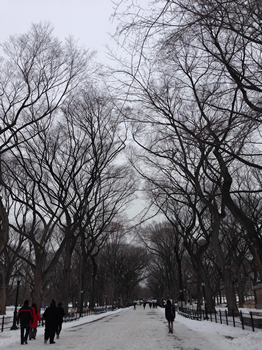 “I’ve read and watched so many psychological thrillers and crime over the years that my brain works in some twisted ways now,” she says. “I love films like The Prestige or Best Laid Plans for the way they use twists and misdirection. Also, I’m a big Gillian Flynn fan. As a reader or a movie-goer I love a good twist. As a writer, I actually get really excited when I come up with what I think is a devious or dark twist.”

But the twists have to be believable. “Readers feel cheated when you drop on them a twist that just comes out of nowhere, or someone shows up at the last minute saying, ‘I am the killer’ with no foreshadowing. I tend to backtrack to justify every choice, make sure the logistic works, etc.” 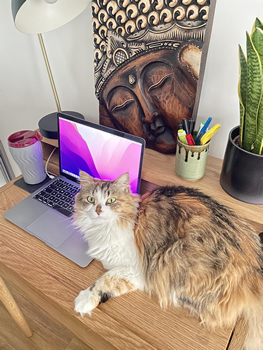 Van Rensburg says she has been writing stories and poetry since her childhood in France. After moving to the UK for college, life took her away from writing fiction for a while. When she eventually returned, a course at Ink Academy in London helped her get back on track. “In writing there isn’t one right way to do anything, just the way that works for you. You need to find out what that is. One thing I love about writing too is that you never stop learning. My agent and my editor have been pushing me as well, and I feel like I’ve learned so much from them already.”

Next for Van Rensburg is a psychological thriller set in South Carolina, where a religious cult has taken over an old hotel. After a fire kills the cult leader and his wife, their surviving daughter has a breakdown and can’t remember what happened or whether she is responsible for it all.

We look forward to that one!