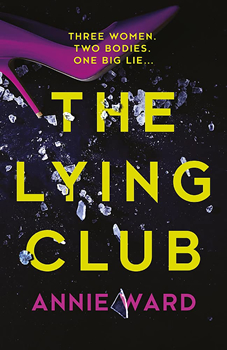 It seems the women of the prestigious Falcon Academy in affluent Falcon Valley, Colorado, have three options: 1) tell the truth, 2) run away, or 3) lie like their lives depend on it. In author and screenwriter Annie Ward’s newest thriller, THE LYING CLUB, the only viable choice is number three—lie.

Natalie Bellman is an administrative assistant at Falcon Academy, a private school for kids from the affluent community of Falcon Valley’s Big Elk Estates in the mountains near Denver. Natalie can’t believe how pretentious and demanding the mothers are—it appears money gives them permission to misbehave. But she has her own secrets, so she keeps her mouth shut.

Asha Wilson is a high-powered realtor whose daughter, Mia, is a star on the soccer team. Asha worries that her husband, Phil, is losing interest in her, and that maybe her frenemy, Brooke Elliman, is trying to seduce him. Brooke has wealth, beauty, and privilege, but lost her husband, Gabe, because of it. Adding to the animosity, Brooke’s daughter, Sloane, is also a soccer-team star—the girls have been competing together since they were six.

Handsome Nick Maguire, Falcon Academy’s assistant athletic director and soccer coach, trains Mia and Sloane and is involved in their college prep. He also charms his way into the lives of Natalie, Brooke, and Asha.

When the janitor finds a body in the gym, detectives investigate who had the most motive and opportunity to kill. As Natalie tells them in her interview, “Every single last one of them had a reason to hate the other.”

This riveting thriller depicts the disparity between the haves and the have-nots and keeps readers guessing who murdered whom until the very end. Besides an exciting storyline, Ward tells us there are important messages and profound issues raised in the novel.

Here she chats with The Big Thrill about her inspiration, how her prior athletic experiences informed the novel, and how the girlfriend of a superstar punched her in the face.

What was your inspiration for the plot in THE LYING CLUB? 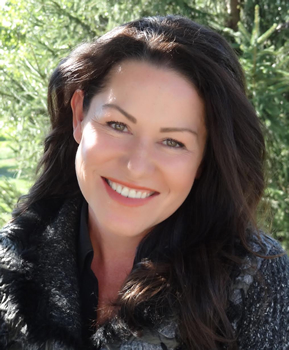 I was a gymnast. Between the ages of six and 13, I trained three hours a day after school during the week and five hours on Saturdays. If I was late to practice, I climbed the rope until I could show that my thighs were bleeding from rope burns. I quit when I was working on a beam mount that terrified me. A girl my age from a rival gymnastics club was training the same mount and broke her neck. She lost the use of her legs forever. I was done, but I would always be fascinated with gymnastics and the athletes who had the mettle to do what I could not: stick with it and become the best.

I was horrified to discover that 265 girls, who had likely already sacrificed much of their youth to the sport, had been sexually abused by USA Gymnastics national team doctor Larry Nassar.

It made me physically sick.

I felt the actual account of what happened was in excellent hands with many capable journalists. As a fiction writer, however, I was inspired to tell a story about the insidious abuse of young athletes and how parents often ignore the warning signs because they focus on the glorious (and largely false) idea that athletic triumph for their children is just around the corner.

Did you base part of the story on your prior experience playing and then coaching soccer?

For a long time, I thought I wanted to write a novel about my experiences working as a coach and personal trainer at an expensive private school. The dynamic between the academic wing, the massive athletic department, and the parents was fascinating, sometimes friendly and sometimes fraught.

My credentials for coaching were based on my past as an athlete. After gymnastics, I switched to soccer and played for the women’s team at UCLA. The world of young athletes and coaches was familiar and intriguing to me.

So the answer is yes. The story draws on my experience as a high school and college athlete, but also as a coach and personal trainer. It also draws on my experience as a mom. I have two children who play soccer, and at this point in my life I can say that I have lived all the roles depicted in THE LYING CLUB. Player, coach, and parent to athletes. It is a world I know well and one that I felt was ripe for a juicy thriller about ambition, jealousy, abuse, and revenge—but also a cautionary tale to highlight the vulnerability of children susceptible to authoritarian figures who aren’t who they claim to be. 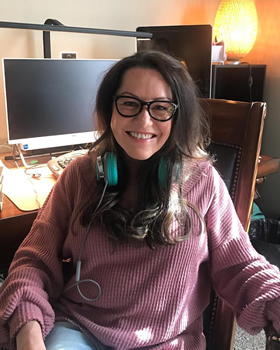 Ward waits to be interviewed on Zoom by The Pitch, Kansas City’s source for news and culture.

The story starts with several women who are in conflict over (mostly) petty grievances. Who is flirting with whom? Who is the best mom? Whose child is the best athlete? Who has the most money, the most handsome husband, the nicer house? It’s all astoundingly shallow.

And then… they realize they aren’t so different from one another. They have an enemy in common. Their ambition has blinded them to how they’ve sacrificed their children to live through them vicariously. Eventually, they see the error of their ways and come together for the sake of the kids.

The message is myriad. Be kind and open to others. You don’t know what is going on in the personal spheres of people you “think you know.” Be vigilant with your kids and don’t sacrifice their happiness in pursuing a dream that you have—and that they likely may not.

And lastly, look to make sure that the person you place your trust in is not a wolf in sheep’s clothing.

I’m so excited about this next one. When I was 23, I was accepted at the American Film Institute in Hollywood to pursue my master’s degree in screenwriting. It was a very unusual program, in that it sought to replicate the dog-eat-dog atmosphere in Los Angeles by sowing competition between the students. Of all the students admitted for the first year, they would invite only half of those to continue the next year and receive a degree. There was a lot of envy, gossip, and back-stabbing.

I set my next book at a film school quite similar to this, and the cut-throat competition that is manufactured there will lead—literally—to some cut throats!

Has your experience in screenwriting informed your novel writing? 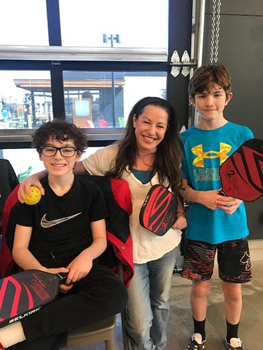 Ward plays pickleball with her son.

It has without a doubt. I take it as a compliment that my writing has been called cinematic. I tend to view chapters as “scenes,” placing a huge amount of importance on dialogue and trying to tell as much of the story as possible through engaging conversation.

Like most novelists, I sometimes want to spend time describing the colors of the sunset, the smell of the pines, the rustle of the leaves, and the deepest, most personal thoughts that I have about all these wonderful things.

As a screenwriter, I usually go back and cut about half of this stuff and get back to the action, conflict, and dialogue. I would never have switched from screenplays to novels if I didn’t prefer the luxury of being able to delve into interior monologues and detailed description, but I think that my training in the more formulaic craft of screenwriting has helped me rein in my tendency to ramble.

Read. Read when you are waiting to see the doctor. Read when you’re in a car line waiting to pick up your kid. Read by yourself at a café with a coffee or a glass of wine. Listen to a book while you’re making that long drive. Take a book with you wherever you go. You will never waste a minute of your life if you have a good book tucked under your arm.

I believe that books are magical. There have been so many times in my life when I’ve picked up the right book at the perfect time and thought, “A-ha! This is the kind of story I want to tell. This inspires me. I have so many good ideas now.” 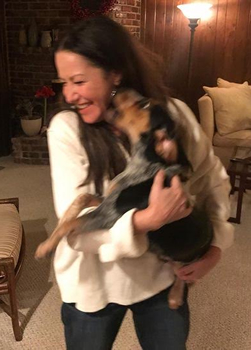 Ward is attacked by a fan.

When I was 28, I moved to Sofia, Bulgaria, because of a “romantic situation.” Not long after, I was hired as a script doctor/screenwriter for an Israeli-American film production company that was producing low budget movies for the SyFy channel in Bulgaria. I was also teaching an English course at the University of Sofia.

One night, I was at a nightclub with some of the Bulgarian teachers from the University and Jean-Claude Van Damme was there, since he was doing a film with my employer. I knew him and thought it would be fun to introduce him to one of my star-struck colleagues. The young lady and I approached, but before I could say more than, “Hey, JC, this is my friend…” the woman seated next to him punched me in the face.

I went flying backwards onto the dancefloor, then my friends spirited me away to the bathroom to tend to my bloody nose. That was par for the course during my years working on films in Bulgaria. But some of the best years of my life!