A Well-Crafted Blend of Suspense, Culture, and Humor 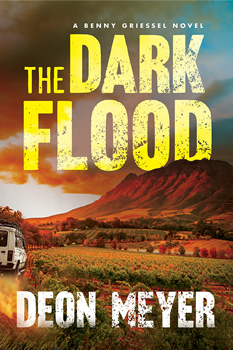 If you’re already a fan of Deon Meyer’s Benny Griessel and Vaughn Cupido thrillers, you’ll be excited to learn that the next in the series launches worldwide this month. And if you haven’t read any of Meyer’s books yet, grab a copy of THE DARK FLOOD anyway—you can read the series in any order—and then catch up on the earlier books later. In a starred review, Kirkus calls THE DARK FLOOD “A well-crafted blend of suspense, culture, and humor. Meyer is terrific.” That sums it up pretty well.

At the end of the last book, The Last Hunt, Benny and Vaughn know their jobs are on the line when they fall foul of the corrupt management of the South African Police Service. At the start of THE DARK FLOOD novel, they’re demoted to ordinary detectives in the country wine-town of Stellenbosch.

Their first case seems to indicate a boring future; a student has disappeared from a residence at the local university, probably off with some friends somewhere. However, something else is going on. They’re slipped pictures of a senior police officer holding a firearm they know he shouldn’t have. It seems their fall from grace has convinced someone they can be trusted to try to expose corruption in senior police management.

In the meantime, Sandra Steenberg, an estate agent struggling to make ends meet for her family, suddenly has the opportunity to earn a huge commission on the sale of an iconic wine farm. But there’s a catch. She has to deal with the crooked businessman, Jasper Boonstra, who caused the slump in the Stellenbosch property market when his business empire there collapsed like the house of cards it was.

And then Boonstra disappears…

In this in-depth interview for The Big Thrill, Meyer talks more about the latest installment in his Benny Griessel and Vaughn Cupido thriller series, THE DARK FLOOD.

The name of the farm whose sale is a crucial pivot of the book is Donkerdrif and that’s also the Afrikaans title of the novel. How does it link with THE DARK FLOOD?

We had a really hard time coming up with an appropriate English title. In Afrikaans, Donkerdrif has a double meaning—a dark ford where you cross a river (and many farms in South Africa are named after a ford), but also a dark passion. The dark passion is the greed that drives the behavior of many of the characters in the book, so eventually we decided that THE DARK FLOOD was the best alternative for the English title.

Stellenbosch had a real financial crisis a few years ago with the collapse of an international conglomerate in a similar way to the collapse of Jasper Boonstra’s business empire. How much of the backstory is based on that event? 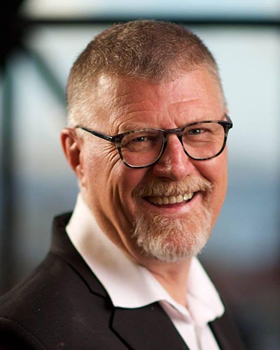 I live in Stellenbosch, and when my wife and I were searching for a home here 12 years ago, we struggled to find something suitable, and so we spent quite a lot of time with estate agents. I often ask people about their stories because you never know where the next idea may come from. One young lady told me a lot about the shenanigans that go on between estate agents. That led to the character Sandra Steenberg. Then, when I started researching the book, semi-state companies were collapsing under the greed of state capture, and that was followed by the corporate collapse also driven by greed. I saw the devastating effect of that on the town, including the slump of property prices. I thought that the combination of these would be a lovely way to shape Sandra’s character and put more pressure on her.

Sandra is an interesting and conflicted character. She’s a hard-working estate agent, committed wife and mother, but she hides their financial problems from her husband, and although she detests him, she’s willing to go along with Boonstra to get a fat commission. Later, she’s willing to go way outside the law to protect it. How did you conceive her?

As I said, I had the idea of an estate agent as a character 12 years ago, and then when Stellenbosch experienced the financial collapse, I thought a young woman would be the right character to develop. It was actually quite hard to find a suitable person to interview because most women in the industry are middle-aged or older. But I met someone and had long chats with her. In a way, she became the role model for Sandra, because this woman was working so hard and struggling so much in a market that was really tough.

The town of Stellenbosch

It was part of the motivation, but I knew after the previous book that there had to be repercussions for Benny and Cupido if I wanted to remain credible to South African readers. At the time of writing, the pro-Zuma forces in the police were still strong, and they would have had their long knives out for Benny and Cupido. I think it’s getting better now, but as with all things in South Africa, there are wrongs to be righted, and it’s going to take time. President Ramaphosa doesn’t have the space to maneuver too quickly.

Another thread of the story is that Benny and Cupido’s demotion establishes their non-establishment credentials. They receive pictures from an anonymous source of a S&W 500 being held by a senior officer. That opens the door on more corruption. How much of that is based on real cases in South Africa?

I have a good friend who is a senior officer in the South African police. Over dinner one night he told me an incredibly interesting story about how the police manage their weapon depot at the Silverton, and I thought that was fascinating. So the story of the student who goes missing is loosely based on that case. 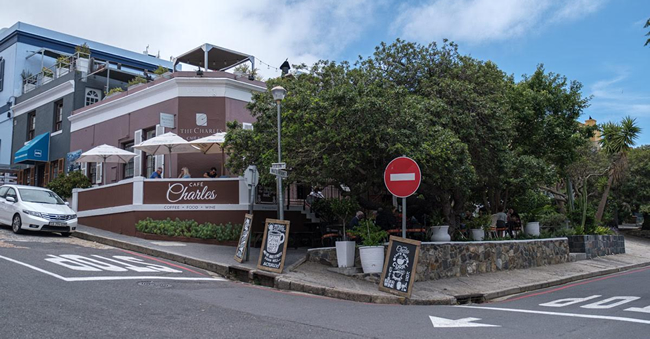 Cafe in Charles, Cape Town, where Benny and Cupido contemplate their future.

Many of your books have multiple plots which seem disconnected through much of the book and then tie up neatly at the end. Do you plan that in advance, or do you have a lot of interesting things going on in your head and just let it all develop and see what happens?

I always have a lot of things going on in my head—whether they’re interesting I’m not always sure.

We all write the books we’d like to read, and I love books with lots of things going on. When I start writing a book and I get these ideas, I think, It will be cool if they connect. Each must be strong enough and have a convincing conclusion to be satisfying. You have to be very careful not to force it and lose credibility. But if it does happen, it can give an extra little thrill.

Headquarters of the SAPS detectives in Stellenbosch.

Did you ever have a book where that happened and you had to abandon one of the subplots?

Yes, I did. With Blood Safari, I had another thread in the original draft, but they didn’t work together, and eventually I had to drop it and do a complete rewrite. But it wasn’t wasted, because years later I used the second thread in another book.

Benny is a reformed alcoholic, and he’s had ups and downs on that front throughout the series. Despite being demoted and struggling with his new role, here he seems to stay on an even keel. Is he finally getting past the booze?

It’s going to depend on what happens in his life. But I also try to remain faithful to why he drinks. He works on that with a psychologist, and now he is loved and made to feel wanted by his fiancée. I can’t say what would happen in the future if something really bad happens in his life, though. We’ll have to wait and see.

On that note, what’s next?

I have a new book underway, but I’m not making much headway because I’m flat-out on the TV and movie adaptations of my books. I haven’t worked this hard since I was a young man. But it’s thrilling when these opportunities arise. We’re working with international people, and the standards that they set are incredibly high. I’m learning all over again. I’m learning so much about the craft of script writing and storytelling, and I find that very stimulating.