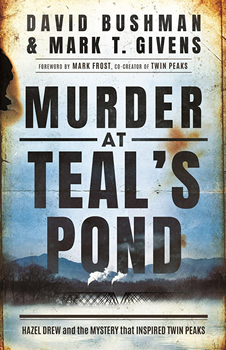 On April 8, 1990, with the opening episode of Twin Peaks, David Lynch and Mark Frost catapulted into television history. A 2017 article in The Atlantic calls the pilot “an event that defies replication,” a show that sparked the audience’s imagination and influenced countless productions that followed—from The X-Files to Breaking Bad and The Sopranos.

The show was known for its surreal depiction of a detective’s investigation into the murder of a young local woman, Laura Palmer, and the effects of the murder on the town. It was inspired by a ghost story Mark Frost had heard from his grandmother. That story, in turn, had its roots in the real-life murder of a young woman in upstate New York named Hazel Drew.

After hearing this story at a conference in 2013, authors David Bushman and Mark T. Givens set out to learn the truth about the murder that had sparked the phenomenon. The result is the gripping true crime book MURDER AT TEAL’S POND: HAZEL DREW AND THE MYSTERY THAT INSPIRED TWIN PEAKS.

The two men were well-suited to the endeavor. Bushman remembers being obsessed with the show, while Givens is the creator of the Deer Meadow Twin Peaks-focused podcast. But from the beginning, the project was fraught with challenges. First, the victim’s name was originally reported—erroneously—as Hazel Gray. This meant their initial challenge was to discover whose murder they were actually investigating. The discovery of Hazel Drew’s murder in Sand Lake, New York in 1908 led to their second greatest challenge. How did one investigate a murder that occurred more than a century ago?

“It was tough!” Bushman recalls. “We were repeatedly frustrated in our search for documents, evidence, etc.—none of it exists anymore. And of course, no one involved in the case is still alive. So we read everything we could get our hands on, talked to everyone we could who had anything to say about it (including descendants of some of those involved), and spent as much time in Troy and Sand Lake as we could, immersing ourselves in the ambience and trying to imagine what it was like 114 years earlier. We had invaluable assistance from so many people who live there and for one reason or another took a very active interest in the case—two especially, and it’s really important for Mark and I to acknowledge them every chance we get: Mark Marshall and Bob Moore.”

What they found was a remarkably complex case. Persons of interest ranged from relatives and paramours to law enforcement officials, while suspects and witnesses often obfuscated the facts. Sometimes these were obvious attempts to make themselves look better. In other cases, they were well-meaning efforts to protect the victim’s reputation. Woven throughout the narrative was an undercurrent of social and cultural values and traditions that colored the community’s perceptions of the event.

What kept Bushman and Givens going was their fascination with the story, along with their determination to bring Hazel Drew’s story to life. Asked what made Hazel’s story so compelling, Givens says, “It started with uncovering the hidden Twin Peaks connection, but I was quickly drawn into this story in and of itself. Weirdly enough, the things that drew me to Hazel’s story were the same sort of things that were so compelling about Twin Peaks—a great setting with a constant air of mystery, the vivid cast of suspects and other characters, the many clues, theories, red herrings, and ultimately seemingly unanswerable questions.”

Since the authors live in different cities, they had to devise a process for their long-distance partnership. Givens says, “We would work on drafts of chapters that appealed to us and then pass them back and forth over email until we were both happy with the draft—sort of giving final say to whoever started the chapter.”

They also made many joint trips up to Troy and Sand Lake to visit the sites where the mystery had unfolded. They spoke to dozens of people: historians, descendants of those involved with the case, amateur sleuths, and interested locals. The ability to visit the sites where key events occurred was invaluable, both in understanding the context of the story and in bringing the town and its history to life.

Each author brought different strengths and interests to the project. Bushman says, “Mark is such a good researcher. He spent hours and hours and hours digging into city directories, ancestor.com, anything he could find. I also love research, but I’m much more captivated by stories than by details like names, numbers, addresses, etc. So I came across these really compelling stories about people like Mamie Killion, a young woman who was killed up there a few years before Hazel, or Mame Faye, the famous madam of Troy at the time, or Henry Kramrath, who got involved because he ran a resort near the pond that was supposedly the scene of wild sex parties, or Bat Shea, a Democratic poll worker who might very well have been executed for a crime he didn’t commit—all sort of tangentially related to Hazel, and I had to get them in there. All of which is to say Mark and I complemented each other really well in that regard.”

With a case so complex—and so cold—the men hoped only to arrive at a plausible guess at the identity of the killer. So they were surprised to arrive at what they believe is the correct solution. Givens says, “The sort of conspiracy of various scoundrels that we think we uncovered was beyond my initial expectations. There are still so many unanswered questions surrounding Hazel—to include why exactly she was killed and whether there were any other of these characters involved in her death. But I feel extremely confident that we pointed the finger at the killer.”

There is a haunting sentence in the book’s introduction. It reads, “Hazel, too, had secrets, and those around her either failed to penetrate them or went to their graves protecting them.” Asked what this quote says about society, humanity, and Hazel’s case, Bushman says, “Our story is told contemporaneously, through the lens of 1908, so we couldn’t draw analogies to Twin Peaks, and besides that, we wanted the story to stand on its own, for people who love true crime but didn’t know the series. But this is a great question, and it is a major theme of our book and also the series. People had to know what was happening to Laura Palmer—the abuse she was being subjected to—but they never tried to help her. It’s easier to be in denial, as long as your conscience can come to terms with it. Hazel, in my opinion at least—and Mark might not agree with this—was on some kind of a dangerous path, yet nobody ever seemed to be there to correct it. Why else would Hazel’s Aunt Minnie have told reporters she wasn’t going to share the names of Hazel’s friends because she ‘didn’t want to get them in trouble’? William Clemens, by far the most aggressive and sensationalistic journalist on the case, even goes so far as to blame Hazel for her own death, saying she was guilty of keeping too many secrets. I think that Hazel, as a working-class young woman in 1908, was victimized not just by the killer, but also by the people around her, and even by the investigators, who failed to ever avenge her death.”

With the completion of this book, both men are hard at work on other projects. David’s next book is already written and will be published in 2023. It’s called Forget It, Jake. It’s Schenectady, which is taken from the last line of the Jack Nicholson-Faye Dunaway movie from the seventies, Chinatown. It looks at police corruption in Schenectady, in Upstate New York, during the late nineties and early 2000s. He wrote it alone. “I would happily partner with Mark again,” he says, “though at present we have nothing planned together.

Mark has lots of ideas in various stages but hasn’t picked a direction yet. “I’m writing an essay for a book on Doctor Who villains that David is co-editing that will be out later this year, I think. I could see doing another book with Bushman if we could come up with a good case to cover. We have had some discussion over the years about developing MURDER AT TEAL’S POND into a screenplay of some sort. I’d love to have a hand in that.”

As for MURDER AT TEAL’S POND: HAZEL DREW AND THE MYSTERY THAT INSPIRED TWIN PEAKS, both authors laud the Sand Lake community for their support and cooperation. Not everyone, however, was so encouraging. One resident worried that subsequent publicity would turn Sand Lake into a tourist trap. Another said the two were never going to solve the mystery, so they should “leave the girl alone.”

Bushman and Givens disagree. They believe that Hazel Drew deserves to be remembered.

David Bushman was a TV curator for 27 years at The Paley Center for Media (formerly The Museum of Television & Radio). He is the author of three previous TV-themed books and spent two years as program director at the cable channel TV Land and four years as a TV editor at Variety.

Mark Givens is the host of the podcast Deer Meadow Radio. This is his first book.