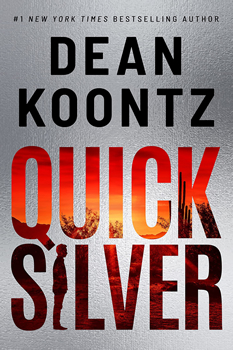 QUICKSILVER is the latest thriller from bestselling author Dean Koontz. The title character is an orphan boy raised by nuns, who before hitting 20 years old is working as a writer in a tourist magazine. However, that life ends abruptly when a government agency shows up wanting to take him away. After narrowly escaping with the help of some friends, he drives—or rather crashes—into another agency team that has been holding a woman by the name of Bridget Rainking and her grandfather. Now the three are running for their lives while trying to discern their purpose in the world.

The original idea for the novel can be summed up in an image: A baby in a white bassinette, abandoned in the middle of a lonely desert highway, with his name pinned to his blanket.

“Sounds like the kernel of a story,” Koontz says. “I brooded for a few minutes: Was this the parents’ story or the story of whoever found the infant? No, it was the baby’s story. But an infant won’t work as a primary point of view. So that opening scene had to be related by Quinn Quicksilver after he’d grown up.”

All right, then what’s this story about? 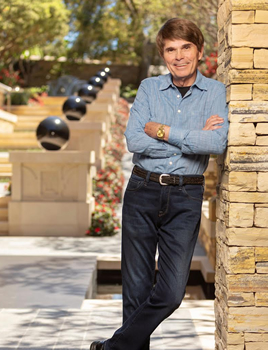 “Pretty quickly, it seemed to me that it would be most interesting if this child, whom no one wanted, not even when he ended up in an orphanage and was offered for adoption, would suddenly be wanted by every law enforcement agency in the country when he was nineteen years old. Since his origins are a mystery, it seemed logical that, when he’s suddenly pursued, Quinn himself doesn’t know why. Of course, I needed to know why. Maybe fifteen minutes later, I knew why, and I laughed out loud. Because I never work with an outline, I just jumped into the river of narrative and swam on.”

During the first draft, the character name was different, Quinn Quicken, and the novel would be titled Quicken. However, there was concern that such a name would evoke images of accounting software and the plot related to mortgage lending. And thus, Quicken became QUICKSILVER. Being the title character, it´s only fitting that the story is narrated with a first-person point of view.

“I could see that the novel would need to be a road trip with the forces of darkness on Quinn’s trail, and that it would best also be a picaresque novel full of encounters with colorful characters in scenes flavored with satire,” Koontz says. “Such a novel then becomes dependent on an engaging narrative voice, either that of the central character or that of a sidekick who narrates the tale. I chose Quinn because his wit and intelligence, filtered through the naivete resulting from being raised by nuns in an orphanage, seemed fresh and appealing.”

Along the way, Quinn gets acquainted with Bridget and Sparky Rainking after an ominous encounter.

“The Rainkings are Quinn’s destiny,” Koontz says. “I often blend genres, but I think this is the first time I included fantasy, as opposed to a bit of science fiction or the supernatural. In a tale with a thread of fantasy, destiny is almost certain to be one of the themes. Quinn and Bridget, not by their choice, find themselves empowered to stand against such sociopaths. As another character, Panthea Ching, says, ‘We are called upon to be scourges. We belong in that honorable and essential place between innocence and corruption, a place called duty.’ Like Frodo in The Lord of the Rings, by their actions they become outsiders and cannot ever again live comfortably in the Shire.”

While QUICKSILVER is one word, the cover has broken it into two. This was a design choice by the publisher as they wanted the title to be big and bold. It made sense to Koontz, and he went with it. That’s not always the case. 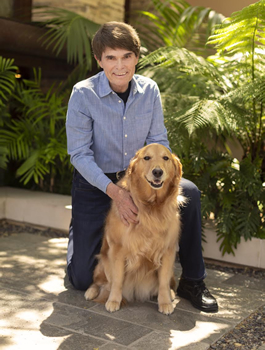 “In the past, not all publishers’ preferences in these matters have seemed reasonable,” he says. “When I delivered The Bad Place, my publisher tried to force a change to Berserk! with an exclamation point. I was prepared to fight that to the death. Fortunately, I ended up with only two black eyes, a broken thumb, and a crushed spleen before getting my way.”

Koontz has written quite a number of novels with one-word titles, like Elsewhere, Intensity, Breathless, and now, QUICKSILVER. But he’s also written From the Corner of His Eye, One Door Away from Heaven, The Darkest Evening of the Year, and others with long titles.

“The titles of the three novels that follow QUICKSILVER are all longer, one of them very long indeed,” Koontz says. “It depends on the story. I don’t try to sum up the plot or themes in the title. It’s more about finding evocative words or phrases that intrigue and that convey something of the book’s essence. And avoiding at all costs the title Berserk!”

After the tale is told and readers have reached the end, they’ll see that QUICKSILVER could be the first in a series.

“Could be, but isn’t,” Koontz says. “I’ve delivered two other novels and am at work on a third. Working with the team at Thomas & Mercer has revitalized me creatively, and the ideas are coming in a flood.”