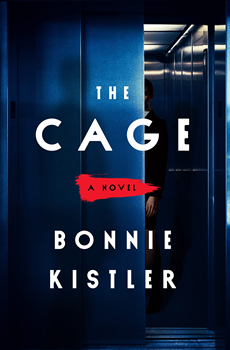 Bonnie Kistler’s outstanding sophomore thriller THE CAGE kicks off with a tantalizing premise: Two women, both employees of an international fashion conglomerate and both working late on a Sunday night, board an elevator on the 30th floor of the company’s corporate headquarters. By the time the car reaches the lobby, one woman is dead, the victim of a single gunshot wound to the head. The survivor, Shay Lambert, insists Lucy Barton-Jones died by suicide, but that answer won’t do for Ingram Barrett, the company’s senior vice president and general counsel. Barrett quickly produces evidence that seems to implicate Shay, who sets out to prove her innocence and figure out why Barrett is hellbent on seeing her charged with murder.

But Shay has a few secrets of her own, and what follows is a tense, complex game of legal cat-and-mouse with more at stake than the investigating detectives can possibly imagine.

It’s no wonder Publishers Weekly has pegged Kistler—a former attorney who made her domestic suspense debut with 2019’s House on Fire—as a writer to watch. Equal parts legal thriller, psychological suspense, and locked-room mystery, THE CAGE delivers on the lofty promise of its setup.

In her latest interview with The Big Thrill, Kistler talks about the inspiration for THE CAGE, her least favorite mystery tropes, and how her work as a lawyer taught her the verbal sleight-of-hand that serves her so well as a thriller writer. 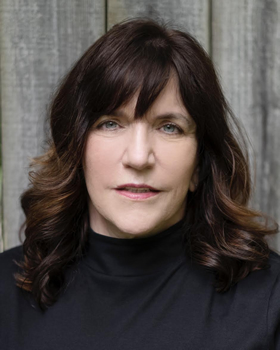 Can you pinpoint a moment or incident that sparked the idea for THE CAGE?

Not a single moment but myriad trips in elevators provided the lift-off for THE CAGE (pardon the pun). I spent my law career in big firms in high-rise buildings, so I passed countless hours riding up and down in these “cages.” The situation often felt fraught with peril. A lot of people have a fear of getting stuck in elevators, but I had a more particular fear: I was afraid of getting stuck with someone else—specifically with opposing counsel or anyone else with whom I might have crossed swords. I dread confrontation (such a bad trait for a trial lawyer), and the prospect of being trapped in an elevator with an adversary would shift my imagination into overdrive. I’d picture murder, mayhem, sexual assault. Sometimes I even imagined that he was hurting me.

Joking aside, it was this experience that led me to place Shay and Lucy in that elevator in the opening scene of the novel.

Lawyers often make great novelists, and much has been made of the storytelling aspect of trial law. What are some other skills you developed as an attorney that serve you well as a writer?

In high-stakes litigation, lawyers spend way more time preparing for trial than they ever do in the courtroom. During trial prep, I would try to delve into every fact and nuance of the case, pore over every document, and interrogate every witness. I was probing for any weakness (i.e., plot hole) in either side’s case and also hoping to find that aha! element that might win the day for my side. Attention to detail and a willingness to chase down every possible lead were crucial. I’ve tried to use those same skills in plotting the events in my stories and in ensuring that they hold together logically.

Another huge part of my law practice involved writing—motions, memos, articles, opinion letters, appellate briefs, etc. This is where I learned to use language as a tool (sometimes weapon) to illuminate, to persuade, and also, I must confess, to obfuscate or distract—for example, to gloss over evidence that might be damaging for my side. That’s the same sort of sleight-of-hand that I try to use in my novels.

Can you tell me a little about the book’s main character, Shay Lambert, and how she took shape for you? 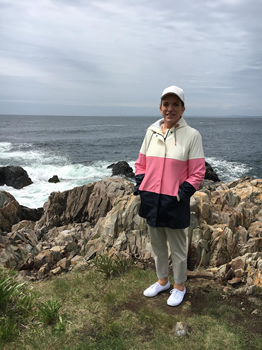 Kistler at one of her favorite vacation spots in Maine

Shay is a self-made woman. With nothing but brains and grit, she’s lifted herself out of poverty and a squalid home life into a plum position at a top-tier law firm. She’s a rising star, married to another rising star and living a charmed life when along comes the Great Recession of 2008. She’s smart, but not smart enough to save herself from a bad economy, bad luck, and her own bad choices.

That’s her back story. The action begins five years later when she’s debt-ridden, unhappily married, and desperate for work. She lands a dream job in the law department of an international fashion conglomerate, but of course the dream becomes a nightmare after the incident in the elevator.

Shay’s an unreliable narrator—but not in the sense of being addled by drugs or alcohol as in some recent blockbuster thrillers. She’s unreliable because she selectively withholds information, from both the police and the reader. Is she so damaged by her history that she’s actually capable of murder? Or is she being framed? Either is possible. Maybe even both. But wherever the truth lies, Shay still has some pretty good tricks up her sleeve.

THE CAGE is fast-paced and meticulously plotted, and you juggle multiple timelines and points of view. How much did you plan or outline, and how much was off-the-cuff?

I begin every novel knowing the starting premise, the main cast of characters, and where I hope to end up. I usually have a few key scenes down, not in words exactly, but more like film clips stored in my memory. I also have big files full of research into the issues that will crop up—law, forensics, historical details. But I don’t outline or plan much beyond that. I like to leave myself room to explore and figure things out as I go. It takes me a year or longer to write a novel. I need to keep surprising myself during that time. If I were working from a detailed outline where everything was already laid out, I’m afraid I might get bored and chuck the whole thing out. 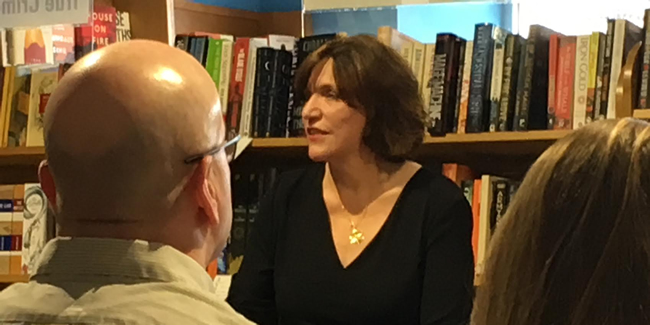 Did you always know what happened to Lucy on that elevator, or was there a discovery process for you as well?

I always knew what happened, but for a long time while I was writing this book, I intended to leave it up to the reader to decide—sort of a Lady and the Tiger ending. Until a lot of very smart people persuaded me that my readers would be frustrated by such choose-your-own-adventure ambiguity. I was convinced to show my cards at the end.

Even when it seems everything has been sorted out, you save a few surprises for the final pages. Do you have any writerly tricks or techniques you can share for crafting plot twists that surprise but also play fair?

Let me use an analogy from my favorite pastime: gardening. The plot twist has to be organic to the story. It can’t just be grafted on at the end. You have to plant the seeds early; they have to be germinating under the surface; but you can’t let them sprout too soon. Ideally, when the plant finally emerges, the result is self-evident. The reader recalls the earlier seeds and now understands exactly what happened without further exposition.

One of my least favorite mystery tropes is that classic scene at the end when the detective assembles the cast in the library and explains the whole plot. Or even worse, when the villain holds a gun to the hero’s head but doesn’t shoot until he explains his whole nefarious scheme—by which time, of course, rescue arrives. That all seems so hackneyed today.

What challenges came with writing THE CAGE that you didn’t encounter with your last novel, House on Fire? 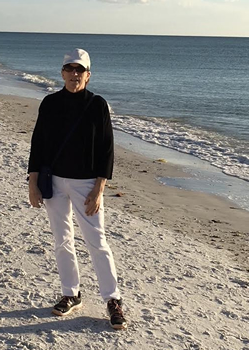 Kistler near her winter home in Sarasota, Florida

House on Fire is about a happily blended family that comes apart at the seams when the wife’s daughter dies in a car accident that may have been caused by the husband’s son. The story’s told in multiple voices—husband, wife, and teenage son—and the reader can sympathize with each of them.

My challenge in THE CAGE was to tell the story in voices that aren’t necessarily so likeable. Shay is too guarded for the reader to completely trust, and her boss, Ingram Barrett, is the straight-up bad guy who frames her for Lucy’s murder. I chose a first-person voice for Shay in hopes that the reader would feel close enough to her to sympathize even while doubting her story. As for Barrett, it was important to me that he not come off as pure villain, so I went to some pains to describe the pressures in his life that lead him to act as he does. He’s never likeable, but I do hope he’s at least interesting.

I’ve finished my next novel which will be published in 2023. It’s about a lawyer who’s built her career defending prominent men accused of sex crimes. I’m now working on a story that involves gaslighting and/or hallucinations. It’s full of mind games and is very dark (even though it’s set in sunny Florida).