Author Gary McAvoy brings us the next in his Father Michael Dominic series with his latest suspense thriller, THE OPUS DICTUM.

Two clandestine syndicates want control over the Church’s power … and the tools to do it are hiding deep in the Vatican Secret Archives. But first they have to deal with a meddling priest who could ruin their plans.

Father Michael Dominic is intrigued when a long-lost briefcase is discovered in the Vatican Secret Archives. Inside, he finds incriminating documents, a special key, and a computer disk filled with codes, which together unlock a piece of the Catholic institution’s troubled past. Suspicious they could influence a special conclave to elect a new pope, Dominic must discover what the documents reveal before it’s too late.

But the two menacing institutions close in on Dominic, intent on taking the key and cipher for their own sinister ends. Father Michael, his young assistant, and a feisty young nun have to work together to decode the information before anyone else. Can they solve the puzzle in time, or will their enemies obstruct centuries of Church history?

The Big Thrill recently caught up with McAvoy to learn more about this ongoing series.

Tell us about your main character, Father Michael Dominic. What has his journey been like?

Michael Dominic is a young Jesuit priest from Queens, New York, whose godfather and mentor, Cardinal Enrico Petrini, landed him a plum job as Prefect of the Vatican Secret Archives. Dominic oversees millions of rare and treasured manuscripts and other historical Church artifacts—the majority of which have never been seen by anyone living nor have they been cataloged—so their sudden discovery often forms the foundation for each novel. Assisted by an engaging team of friends and colleagues, Dominic’s adventures often land him in danger against people and organizations at odds with the Church.

The settings in my books center around the Vatican, and from there branch out into numerous other countries where the plot takes the characters. And since I write a series of standalone books involving the same (and new) characters, they pretty much determine how the plots take shape. 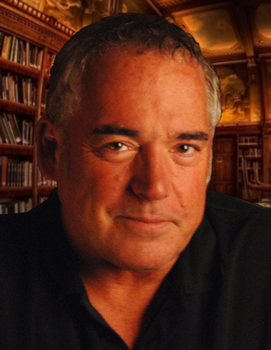 What led you to settle on the setting of the Vatican?

Growing up Catholic, I’ve always been intrigued with the Vatican and its global influence over a billion souls, not to mention the priceless artworks, relics, and manuscripts in their Library and Archives. Dominic’s adventures often take him to other global cities to ferret out the mysteries connected to these objects. His best friend, an investigative journalist named Hana Sinclair, comes from old money, and her grandfather’s private jet serves as their primary means of travel to these far-off places.

Did you have to do any specific research for this story? If so, can you talk a little bit about that process?

For decades, I’ve collected books on the Vatican Rome and Italy in general, since personally it’s my favorite place in the world. I know it pretty well from my own travels, so describing Italian life and locations brings a sense of place and intimacy to each book, something I’ve found readers really love.

I was hooked on thrillers when I first read works by Robert Ludlum and Michael Crichton, then on to so many other fine thriller writers. It’s the anticipation of suspense on grand international scales that appeals to me, flavored by religious mysteries centered around the Vatican.

Characters readers can relate to: imperfect but engaging, dealing with real life struggles and joys, and enjoying the company of other like individuals. Imbuing each story with specific sounds, smells, tastes, and observations of wherever the characters happen to be is often remarked upon by readers as “putting them right there in the scene,” and I find that really motivating. Plus, ending each chapter with something so compelling the reader has little choice but to turn the page.

Gary McAvoy is a veteran entrepreneur, and author of several books, including his bestselling thriller series The Magdalene Chronicles, and his newest series, Vatican Secret Archive Thrillers. His nonfiction work And Every Word Is True has been hailed as a sequel to Truman Capote’s landmark book In Cold Blood. Gary is also a professional collector of ancient manuscripts and historical documents, much of which informs his writing projects.