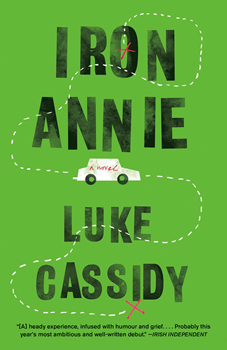 Luke Cassidy doesn’t so much as glide into the literary scene with his provocative debut, IRON ANNIE, but rather slams into it with a tour de force of a story about young Aoife and her doomed love affair with the occasionally cross-dressing Iron Annie of the title.

Set in a fiction version of Dundalk, Ireland, the novel moves back and forth through time, tracking the lives of colorful characters while meticulously weaving in themes of love, loyalty, and grief—along with a healthy dose of humor.

It’s an ambitious book—heavy on the Irish vernacular, peppered with shocking crimes, and rich with character—but Cassidy pulls it off with a deft hand, showcasing his considerable talent. No surprise IRON ANNIE sold in a two-book deal.

In this interview with The Big Thrill, he shares more about his story, the inspiration behind the book’s themes, and what readers can expect from him next. 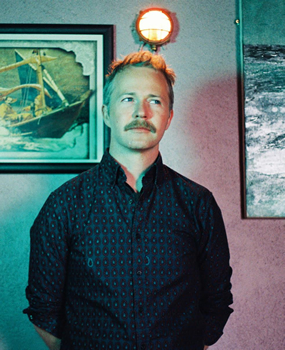 I’m fairly in love with Aoife, the rough-around-the-edges narrator in your fantastic debut, IRON ANNIE. I’d love to know more about what—or who—inspired her character?

I really couldn’t tell you where Aoife came from. Perhaps she’s part of me. Certainly, she’s not based on anyone I know from my personal life. I’ve often likened the process of writing to a sort of deep-sea dredging, in that you pull up these things from inside you, things that you didn’t know were inside you. Aoife is pure town—she lives and breathes the fictional version of Dundalk, my hometown. So I guess there’s that. But I would emphasize the fictive part. I am not, lest there be any doubt, claiming to identify as a queer female crime boss from the Irish borderland. Just a guy with a bit of imagination.

And of course, I’d be remiss if I didn’t also express my affection for “Iron Annie”—a formidable character and the perfect match for Aoife. Where did Annie emerge from?

Likewise, Annie isn’t based on anyone in particular, per se. One review wrote that Annie is a compelling character not because she’s likeable (she’s not), but because everyone has met an Annie—an opportunist, a user, an emotional vampire. But I think it’s important to be fair to Annie. These characteristics are very much situational—a question of context. Perhaps in another context, she wouldn’t have been so bad.

The language is IRON ANNIE is authentically Irish, and it took me a few beats to get used to the cadence, but once I did, I found myself fully immersed in the story. Did you worry as you were writing it that the book would be difficult for readers not used to the language, and if so, how did you proceed?

I don’t think it’s too helpful to worry about things like that in the moment of writing. I’m not sure it’s advisable or even possible to design a compelling piece of writing in advance of contact with the page. The worries came after I had a book in my hands! But for sure, the language, the specific vernacular of my fictive version of Dundalk is inseparable from the world, the character, the voice… There was no other way to write this particular book.

Ultimately, IRON ANNIE is a book about belonging. What drew you to this theme, and what do you hope readers take away from this story, aside from a great read?

You’re right, it is. But that was only a theme that I realized was so central at the end of the process of writing. I was living abroad, in Europe, while writing IRON ANNIE, and I had spent the ten years prior to that primarily living abroad. So coming around to writing about my hometown, about Dundalk was all about belonging for me. Returning to that way of talking or thinking—everything. There is a very particular atmosphere on the Irish border, there has been for 100 years. And mostly, when you grow up there, you think of it as a handicap, as something people elsewhere in Ireland will judge you for, because of the legacy of conflict and lawlessness. So it was also a way of turning that into a strength, into a source of pride.

I’d love to know more about your path to publication. I also read that you adapted IRON ANNIE into a stage show. What can you share about that process and motivation?

The path to publication felt, at least, quite drawn out. I feel like a bit of an outsider in terms of contemporary Irish literature, but I’m quite comfortable with that. As I said, I spent the last decade abroad, so I wasn’t around to be part of the scene. So when I started (in 2019), I started from scratch, looking for representation and a book deal. I’ve written more on that elsewhere, but I think it’s rarely a straightforward process.

The Iron Annie Cabaret, the theatre show based on the book, was something that came together quite organically. You can understand the show as a piece of theatre inspired by the book, in which there is a concert with two live bands. I am very inspired by music; I always have been. Not just listening to it, but the idea of music in language. I have a lot of very talented musicians in my midst, so it was very much a kind of conversation with them and with the stage. We toured around regional theatres in Ireland last year, and will be hitting Dublin, Cork, and Belfast this year before hopefully heading to the UK. If anyone knows a little black box theatre off Broadway that would have us, hit me up!

Cassidy at the Spirit Store, a Dundalk pub that makes an appearance in IRON ANNIE

IRON ANNIE is very much driven by character and voice—with voice being one of the most difficult writing skills to “teach.” But The Big Thrill is as much for aspiring writers as it is for readers, and I’d love if you could share a bit of advice on how writers can cultivate that unique voice that allows them to stand out in a crowd.

For me, the key to voice is character. That is, letting the character be, without too much judgement or interference. The little ticks of language that Aoife has, the words she uses in the way only she does, these are universal things. Language is a huge part of how we carve out a place for ourselves in the world. I think that being true to character, and then being rigorously disciplined about implementing the voice, keeping it consistent, those are the keystones. 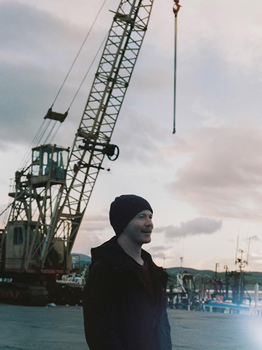 Cassidy at the port in Dundalk, Ireland.
Credit: Megan Doherty

I have never been to Ireland, but I sense you captured much of the country’s atmosphere in your descriptions throughout IRON ANNIE. How important is setting to you in your writing, and what aspects of Ireland were critical for you to embody in the novel?

I think Dundalk, more than Ireland, and the border region generally are the important settings for me in IRON ANNIE. It’s a region that has been much maligned through history—ignored, isolated, divided… Go to Dublin and most people still won’t have a good word in their mouth about it, despite never having been—and despite it only being an hour away. I suppose I wanted to show, as well, what’s special about the character of the border before it gets totally subsumed in the rising tide of globalization and homogenization that’s as much a force in Ireland as it is in Illinois.

Vintage Crime/Black Lizard & Bloomsbury bought IRON ANNIE in a two-book deal. Congratulations! What can you share about what you’re working on next?

I’m working on book two! It’s in the same fictive universe of Dundalk—the Town—but it feels quite different from IRON ANNIE in a lot of ways, even though Aoife and a lot of the other characters still appear in it. It’s been a very different process, writing it, but one I’ve learned a lot from.