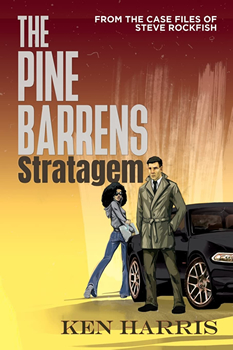 It’s hard making a living as a private investigator. Clients are moody and unreliable, you have to spend what little cash you have bribing seedy individuals, and almost every gig you land is essentially taking pornographic pictures of aroused adulterers for suspicious spouses.

But it pays. Well, it did pay. But the pandemic hit, and now those wandering wives and handsy husbands have stopped their wandering and their… handling. Handsy-ing.

Enter Steve Rockfish, official status: broke. One could even go as far as to say he’s desperately broke—the repo man is calling after his beloved Dodge Charger, Lana, again. When the last two gigs to his name cancel (one on account of murder) things look bleak for his and Lana’s future together.

But just as he’s about to hang up the PI towel and return to work at the local refinery, Steve gets a call from a fancy Hollywood producer set on making a true crime docuseries about a 1940s child trafficking ring. Tasked with unearthing the mystery of the ring for the docuseries, Rockfish soon learns that just because it’s history doesn’t mean it’s over.

In this exclusive interview with The Big Thrill, author Ken Harris gives us the dirty details behind what makes Steve Rockfish tick, and the challenges that come with writing a book about and during a pandemic.

What is your favorite thing about Steve Rockfish—what about that makes him him?

The same thing that makes me me. The man has a way with sarcasm and dry wit. He’s not afraid to say out loud, or sometimes under the safety of his breath, what a lot of the other characters are actually thinking. He can think quickly on his feet and is more apt to use his brains instead of his fists to get out of a jam. Lastly, he’s loyal to a fault, and that becomes evident to the reader as the story moves forward.

Not to mention the man knows his way around a good Irish whiskey. 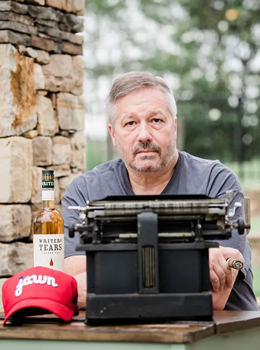 Why choose the name Rockfish? Is there a story behind that?

Ah, Rockfish. The name comes from the 1970s private eye show, The Rockford Files. It was a favorite of my father and me, and THE PINE BARRENS STRATAGEM is my homage to it. After retiring from the FBI and with COVID shutting much of the country down, I rediscovered my love for the show once I learned it was available on the Peacock app.

On the show, one character continually referred to the protagonist, Jim Rockford, as Rockfish. Even more, my father would refer to the show the same way as in, “Hey, are we watching Rockfish tonight?”

Also, I thought it was a nice touch to honor the memory of James Garner and that nickname as the last name for my main character.

What is Rockfish’s major character flaw? How does this flaw show up in his adventures?

Does he have one? Because he’s pretty amazing in my eyes and keyboard. I kid, but he does have a lack of compassion for things he doesn’t understand. He’s a textbook 1970s private eye navigating 2020 waters. Compassion is one feature of his that does slowly change once he meets his co-protagonist (is there such a thing?), Jawnie McGee.

How did your time in the FBI influence not just the writing of this book, but the characters and plot within?

My 32 years with the FBI provided me with a background and knowledge of investigative procedures, if that makes sense, to write a gripping crime thriller. I can predict what my protagonist should and shouldn’t do in certain scenarios. Knowing those behaviors and techniques makes the story more grounded and less of a super spy James Bond type of story line where the reader questions exactly how much belief they can possibly suspend without putting down the book for good.

The FBI itself plays a very minor role in THE PINE BARRENS STRATAGEM. I find it more enjoyable to write about a small two-person detective agency than a large bureaucratic machine. It’s more personable and compelling. People have asked why I don’t write an FBI thriller, and that’s an easy answer. There are way too many people writing about the FBI, and I don’t need to add to it. I’ve got other, more entertaining stories to tell. Besides, what fun is it if you know everything about the subject matter?

You wrote this during the pandemic. How did that stretch your creativity, and how did it suffer?

The pandemic plays a major role in the story. I make use of it to shape not just the premise but my characters’ every encounter.

I knew there was a large chance of turning off readers by placing my novel smack dab in the middle of the pandemic. People are tired of reading/hearing about it. As a matter of fact, that point was brought to my attention in a query rejection email from a small publishing house. Fear of the unknown. I get it, but I wanted to write the story I wanted, and you can’t please everyone. If I wanted to write what I thought the general public would willingly accept and were I solely in this for the money, I’d have tossed half a dozen zombies in the story.

I also wanted to challenge myself as a writer. First, I was interested in how a modern-day detective would operate in such a challenging landscape. How would the pandemic effect the number of clients walking through the door and how it would change normal avenues of investigation. And the second was how I as a writer could find different ways to show character emotions and non-verbal cues while they were behind a mask. It’s the time we live in, and I wanted to capture it the best I could. With some humor, sarcasm, and thrills thrown in.

My favorite thing, and it will come off as cliché as they come, is giving life to characters. Telling a story people enjoy. One that they devote portions of their free time to read. To me, there is no greater compliment than someone reading your story when they could in fact be doing half a million other things they enjoy. What? You got lost in my story and ended up burning dinner or totally forgot to make it in the first place?

I’d be remiss if I didn’t mention positive feedback. I love getting it. At first my anxiety really doesn’t want to hear it, fear of failure and all, but afterwards I roll around in it like a bank robber on a bed of stolen cash.

Any plans on turning this into an ongoing series? If so, where do you see things going for Steve Rockfish?

Funny you should ask. See You Next Tuesday – From the Case Files of Steve Rockfish 2 is currently in production with Black Rose Writing, and I should have a cover reveal in the near future. Currently it’s scheduled to publish on July 14, 2022. Here’s a glimpse at my elevator pitch:

A private detective’s father falls for an online scam, and he vows to retrieve the cash while his partner takes on a client alleging infidelity. They unknowingly investigate the same doomsday cult from different ends and after meeting in the middle, discover the grift is larger and deadlier than either of them expected.

Ken Harris retired from the FBI after thirty-two years as a cybersecurity executive. With over three decades of writing intelligence products for senior government officials, Ken provides unique perspectives on the conventional fast-paced crime thriller. While this is his first traditionally published novel, he previously self-published two novellas and two novels. He spends days with his wife Nicolita and two Labradors, Shady and Chalupa Batman. Evenings are spent cheering on Philadelphia sports. Ken firmly believes Pink Floyd, Irish whiskey, and a Montecristo cigar are the only muses necessary. He is a native of New Jersey and currently resides in Northern Virginia.