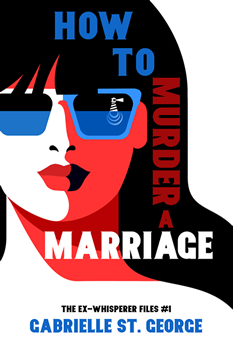 HOW TO MURDER A MARRIAGE is the first book in author, screenwriter, editor ,and successful relationship advisor Gabrielle St. George’s Ex-Whisperer Files, a soft-boiled mystery series starring Gina Malone, advisor on traumatic breakups and a target for her enemies.

HOW TO MURDER A MARRIAGE is a character-driven mystery. Gina Malone, a bestselling relationship advice author and expert on exes, meddles in other people’s affairs for a living and makes enemies—and one of them is scaring her to death.

A modern-day Miss Lonelyhearts resurrecting the core of Nathanael West’s iconic male character set in the Great Depression, Gina is divorced, an empty nester, and staring squarely at her mid-life crises. She dyes her hair, pierces her nose, and moves to a tiny tourist town on the Canadian shores of Lake Huron. Just as Gina’s settling into her new life, she advises a reader to leave her husband, right before the woman goes missing.

And Gina’s got a stalker.

She wonders if it’s her vengeful ex-husband, the abusive ex of the missing woman, or her latest crush’s unstable ex… Any of the three would love to get her alone in a dark, deserted place. Not difficult, since her new home is an old family cottage on an empty stretch of beach. Gina now has to outsmart her stalker and find the missing woman before the noose around her own neck gets any tighter.

St. George is a Canadian screenwriter and story editor with credits on more than 100 produced television shows in the US and Canada, and her feature film scripts have been optioned in Hollywood. She is a member of the Writer’s Guild of Canada, Crime Writers of Canada, Sisters in Crime, Mystery Writers of America, and International Thriller Writers.

St. George writes humorous mysteries and domestic noir benefitting from the multiple domains of her expertise. She deftly meets challenges and welcomes those offered by HOW TO MURDER A MARRIAGE. 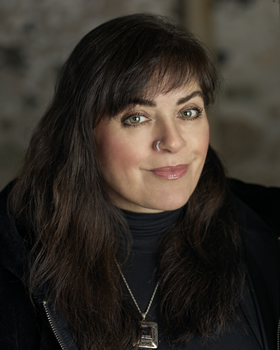 “I naturally have a good ear for dialogue,” she says. “The easiest thing is for me to write (like) screenplays, so that’s a happy coincidence. Story structure comes very easily. I love to plot—especially against my enemies! Description is my least favorite thing to write. I skip those eloquent, long, award-worthy descriptions in books, mostly because I don’t have the attention span to wade through them. I love short and concise. Hemingway got it right. So did Elmore Leonard.”

HOW TO MURDER A MARRIAGE was an opportunity for St. George to synthesize her different experiences into a single, coherent whole, which she expresses with unabashed self-confidence.

“I use much of my real-life experiences and relationships for inspiration, fodder, and straight-up material in my writing,” she says. “I’ve worked through a range of emotions by modelling characters after people who have hurt or harmed me in my life. It’s extremely therapeutic because I’m in complete control and these characters don’t get to defend themselves or clap back. As a bonus, it’s cheaper than therapy.”

No genre protocol could resist the onslaught of such spirited commitment, and St. George has creatively modeled her clay to the demands of her story. She readily admits to having upended several genre conventions, especially where pre-conceived notions of middle-aged women’s empowerment is concerned.

“I haven’t been able to find many main characters in mysteries who I can fully relate to—strong middle-aged women who are doing all the badass things I am, or wish I was doing,” she says. “Millions of women over 50 are reinventing themselves and are finally able to do what they want to do. We’re the first generation in history to have the money, the knowledge, the time, and the freedom to go after what we want…

“(So) my main character, Gina Malone, is creating a dynamic second half of life for herself that is exciting and sensual. She’s decided that the best is yet to come, and she is determined to make it happen.

“She’s middle-aged, real, irreverent, funny, and cringingly relatable. At 50, she’s pushing the restart button on a whole new life for herself.”

In answer to the authors and books that have influenced St. George as a writer, she says, “Alice Hoffman is my all-time favorite writer because I love the way she weaves magic into the everyday. Nora Ephron, Helen Fielding, (and) Marian Keyes make me laugh. I also crave a good, hard-boiled detective novel. Comic books from the ’60s first turned me on to reading, and I never went to sleep without reading and re-reading any I could get my hands on. Also, when I was a little older, Carolyn Keene (the ghost writers who wrote under that pseudonym) because Nancy Drew under my bedcovers with a flashlight was one of the most exciting things in my young life. Nancy Drew got me hooked on mysteries, and that passion never waned.”

St. George lives on a fairy-tale farm along the Saugeen River. She spends weekends at her 1930s cabin on the shores of Lake Huron with her partner and their extremely disobedient dogs. When she’s not writing, painting, gardening, stargazing, moon-dancing, and daydreaming, she travels the world to visit her “four fabulous children who live abroad.​”

Gabrielle St. George is a Canadian screenwriter and story editor with credits on over 100 produced television shows, both in the USA and Canada. Her feature film scripts have been optioned in Hollywood. She is a member of the Writer’s Guild of Canada, Crime Writers of Canada, Sisters in Crime, Mystery Writers of America, and International Thriller Writers. Ms. St. George writes humorous mysteries and domestic noir about subjects of which she is an expert—mostly failed relationships, hence her debut soft-boiled series, The Ex-Whisperer Files, which launches with HOW TO MURDER A MARRIAGE on November 9th, 2021 from US boutique mystery publisher Level Best Books.