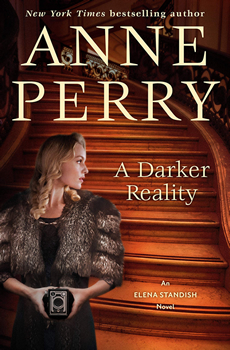 Since her career kicked off with The Cater Street Hangman some 40 years ago, British author Anne Perry has mastered the historical fiction crime genre with her cultural accuracy, compelling narratives, and hopeful sensibility. This prolific author has about 100 books to her name, and at 83 years old is still going strong.

What’s interesting about Perry’s two major detective series is that both feature a male police protagonist and a female partner. Thomas Pitt is a working-class police superintendent whose wealthy wife Charlotte helps him solve crimes through her high-society connections in the Charlotte and Thomas Pitt series. And the amnesia-touched inspector William Monk works alongside nurse Hester Latterly. Both series are set in the 19th century, rich with details of the Victorian era and peppered with taut suspense. And both have strong, intelligent female characters.

Writing strong, intelligent women, Perry says, has always come easily. “I just painted women as I have seen them. I would love to have my father’s brains but my mother’s courage. I remember my grandmother as quiet, loyal, and brave. She lived through two world wars, quiet, always there, helping. I will bet there are millions of people who have strong, brave women in their families.”

Now her latest novel, A DARKER REALITY, sees the return of another strong female character: Elena Standish. The fourth book in this newer series follows the young British spy as she visits Washington, DC in 1934 to get acquainted with her mother’s side of the family and celebrate her grandparents’ 60th wedding anniversary. But on the night of the grand party, a glamorous woman is murdered, hit by a car outside the home, and everyone at the high-society gathering is a suspect. Little by little, the characters’ varying perspectives on Hitler’s rise and the building unrest in Europe unfold, along with the dangerous scientific innovations leading to atomic bomb technology. It all plays out against the backdrop of that mournful, uncertain time after World War I and before World War II.

Perry captures this tumultuous time in all of its complexity. Characters reveal their alliances, and the profiteering of war is addressed. Before she began A DARKER REALITY, Perry says the era between the two major world wars was on her mind. “In the ’30s, we were exhausted by loss in war all over Europe and less so in the USA, but also the extreme right wing was powerful. We wanted to believe that Nazism was okay. And, of course, there is always greed.” 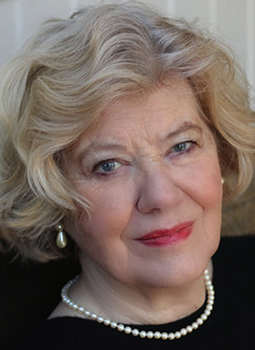 Perry has said she likes to take current events and trends and put them into a historical era whose people lived through similar circumstances. For instance, take the divide between the politics and values of the young and old. In A DARKER REALITY, Perry deftly portrays Elena’s more progressive, inclusive politics against the more conservative, right-wing worldview of her grandfather. Like Marius and his grandfather knocking heads in Les Miserables, Elena and her grandfather conflict in their values.

Luckily for Perry, she didn’t have to draw on personal history for that dynamic. “Fortunately, I have not had that experience,” she says. “I was born just before WWII and the Blitz. Dunkirk was very uniting. There is probably a lot I don’t know about my ancestors, but nothing that has horrified me yet. But I can imagine how it must be. Or almost! A lot to explore in what you will still fight for when it deeply hurts.”

In A DARKER REALITY, Elena, a secret MI6 spy, officially works as a photographer, and at the book’s opening, she mills about her grandparents’ party, snapping portraits of female guests in their luxurious gowns. Those photographs play a key role later in the story’s narrative, as the subtleties of composition provide clues to the murder investigation. Though Perry has never worked as a photographer, she could have happily done Elena’s job. “I love clothes, fashion, etc. especially the thirties!”

In several of her books, Perry has gracefully inserted known historical figures as characters. For readers, stumbling across someone like Winston Churchill on the page offers a brief thrill. In A DARKER REALITY, Franklin and Eleanor Roosevelt appear for a time. When it comes to including historical figures in fiction, Perry offers this advice for writers: “Be careful. Don’t malign anyone, get their appearance wrong, or place them somewhere they could not have been.” But she says, to write a historical figure is “great fun!”

In terms of the actual writing of novels, Perry says she does map out her stories before launching into the work of words. “Outlining I have done for years. It is now in my contract, 10 to 15 pages. A single-spaced outline submitted before I begin,” she says. “I don’t have to wait until it is approved before I begin writing, but boy does it pay off!” She finds all of the moving parts of a novel come together better with preparation. “The plot must work, the characters make a journey whose meaning and points of emotional change are clear. Mood, pacing, everything fitting together. No writers’ block, because you know what every scene has to accomplish. It works.”

With dozens of books to her name, Perry still finds time to write new mysteries for her Christmas books series. Impressively, she’s written and published a Christmas mystery every year since 2003. Her latest, A Christmas Legacy, comes out in November of 2021 and focuses on Gracie, the former maid of Charlotte and Thomas Pitt. “Gracie comes back,” she says, “married to Tellman and with three children. She moves into a troubled house as a temporary maid, discovers a crime, and rescues the situation. I really enjoyed writing about her again!”

Though Perry was born in England and lived in Scotland for many years, she has lived her recent writing life in Los Angeles. She moved there in 2017 to be more available for film and television adaptations of her books. Though she lives in a city with some interesting history itself, she hasn’t considered taking on Los Angeles as a setting. “I wouldn’t set a story in Los Angeles. There are literally millions of people who know it and understand it better than I do.”

It’s more than obvious Perry enjoys being a specialist in her particular historical periods, and her work shows that passionate engagement. The wonderful thing about books, she says, is though we can only live one life, we can participate in as many as we can read about in stories. “A really good writer can show you the life of someone utterly different from yourself,” she says, “how they feel, what they see, what they love, fear, hope for. You can feel in their skin, understand their fears and their dreams and care about them.”

Nowadays, what’s of most interest to her are people who carry the darkness of selfish emotions. “The effect of power, fear, and greed on people,” she says. “Who rises in courage and stands strong? Who buckles to fear, greed, enmity? It so often is not what you expect. Who has what hostages to fortune?” Will these issues appear in a future novel? She simply says it’s all “a lot to think about.”