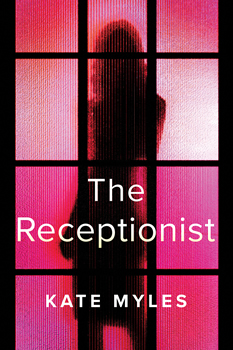 In this domestic psychological thriller, Emily is at the top of her game as an agent for reality TV and talk show stars. She is also pregnant with her first child, but her husband, Doug, is a serial philanderer. Emily chooses to preserve her opulent lifestyle by ignoring his affairs until he begins seeing the new receptionist, Chloe, at his market research firm. All three of them—Emily, Doug, and Chloe—will stop at nothing to claw their way to the top of this desperate triangle, but their schemes all are blueprints for disaster.

The Big Thrill caught up with the wizard behind this intricately plotted tale to give us the inside scoop on the inspiration for these characters, and whether anyone in Hollywood should wonder if they are in the book.

“I wish I could say the characters were based on actual people!” Myles says. “That would be a great publicity riddle, wouldn’t it? They’re products of my imagination, inspired by snippets of gossip and observed behavior. Emily and Doug would be familiar to anyone who has spent time on the west side of Los Angeles. They’re of a type—status conscious, slick, ruthless when they have to be. I’m fascinated by these folks, mainly because I wonder how they see themselves. How do they justify certain actions? Or do they even feel the need to? People who survive in competitive industries may adjust their moral compass at times.” 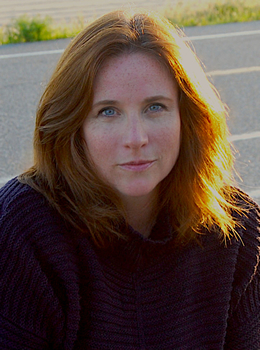 Myles knows the real Hollywood. She’s worked as a TV producer, actor, and comedian, and was the host of a Travel Channel series. “I’ve loved working as a producer, but I was itching to create something that went a little deeper, a little more subversive, something that was my vision from start to finish.”

She hadn’t considered herself a writer, and as a producer, didn’t have the time to write. “I found the process excruciating, actually,” she says. “In my twenties, before I became a producer, I’d start a story or screenplay and would never be able to get past the first few sentences. But I was always a reader. Anytime I came across a wonderful passage in a book I’d think, ‘I want to do that.’”

Then her son was born in 2012. On extended maternity leave, she began writing short stories during his naptime.

“Because I’d spent years in reality TV churning out episode after episode, when I sat down to write, the words flowed more easily. Of course, I had a lot to learn in terms of craft,” she says. “I took a number of classes at local colleges and joined a weekly writers’ group.” 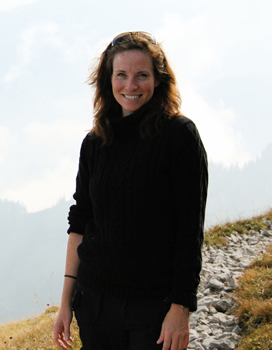 Myles on the job in Switzerland, when she used to travel the world as a television producer

Myles found publication success with some short stories. “One story I had trouble finishing was an ironic fairy tale about a naïve Cinderella type wandering around 21st century Hollywood and stumbling into an extra-marital affair with a fast-talking Prince Charming. I really didn’t know how to end the story. I knew the Cinderella wouldn’t live happily ever after, but I wasn’t sure how to get there. Then I thought about the Prince Charming’s wife and realized she was probably just as shrewd and cynical as her husband. I wrote a few chapters for this character who ultimately became Emily. That was when I realized I had a novel on my hands. It took about five years to finish the first draft. I had to put it down for long stretches when I’d take a producing gig, but I always came back to it.”

Query letters landed her an agent, and ultimately, a publishing contract with Thomas & Mercer for THE RECEPTIONIST.

In writing this story, Myles pursued what most intrigued her, such as the psyches of her villains. No mustache-twirling, though. “Awful people don’t announce themselves as such.”

As an example, she recounts the story of an older couple who lived two floors up in her old apartment building. 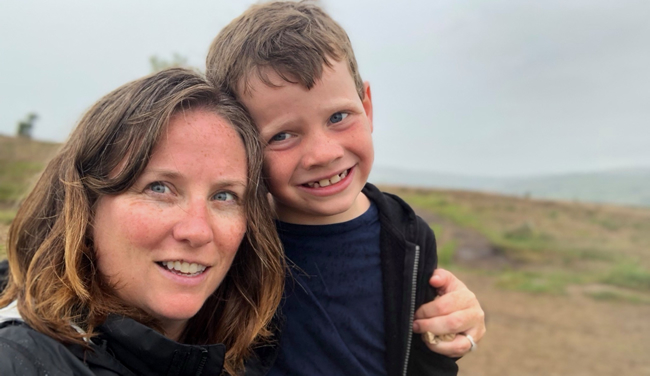 Myles roams the moors near the Brontë parsonage in Haworth, UK, with her son.

“The woman was incredibly warm and gregarious. She went out of her way to gather deliveries, large packages, and magazines for everyone in the building and leave them on our doorsteps,” Myles says. “The man was more of a curmudgeon, but every day he would leave food out for the stray cats in the neighborhood. My husband and I were friendly with them and thought they were vaguely eccentric, but sweet. One night I came home, and my street was blocked off. The FBI and reporters swarmed the building. Turns out the guy was actually Whitey Bulger, the notorious mob boss and one of the worst humans ever.”

In THE RECEPTIONIST, Myles gave her main characters a chance to do the right thing. 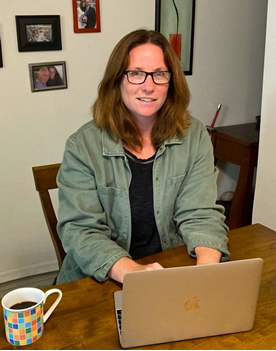 During quarantine, with everyone working and schooling from home, Myles claimed the kitchen table as her workspace.

“I gave them each an opportunity to turn it around through some of the qualities we all associate with morality, like empathy, remorse, or reaching back into Western philosophy, a sense of awe,” she says. “Each character has a scene where they either reject these principles or twist them in such a way as to make them useless. For example, Emily states flat-out that motherhood won’t work for her if she spends time on empathy, worrying about ‘unlucky children.’ Chloe spends a chunk of her story trying to block out something terrible she has done. My favorite example is probably Doug, whose arc is bookended by these transcendental experiences, one of which may or may not be God offering grace. But he’s so limited as a person he can’t receive any of it except as fodder for his ego.”

Still, moments of self-awareness make their way into the characters’ lives. “I gave Emily a pet-the-dog moment in one of her opening scenes, where she’s literally petting a dog. At the same time, I didn’t want it to be some cute or facile thing I just threw in there. I tried to get underneath it, delving into what it means to be tender toward another creature. For a moment Emily feels human, grateful to be experiencing an appropriate emotion.” 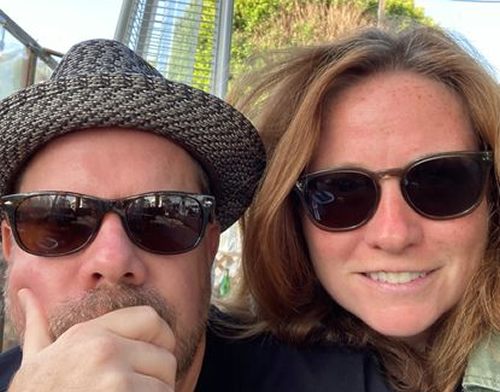 Myles with her husband, Peter

While this story has many takeaways, Myles says, “Most importantly, I hope readers come away feeling thoroughly entertained. And if they choose to, maybe they might think about what it means to be redeemable or irredeemable. How do the values of the culture affect our own moral compasses? While writing this book I cared deeply about the characters and wanted them to become better people.”

Myles’s next project is about a young woman in a small town in New Jersey who runs afoul of the local mafia. “Loyalty, tribe, fairness, and our responsibility as bystanders all come into question,” she says.

With a premise like that, we know it will be as gripping as THE RECEPTIONIST.