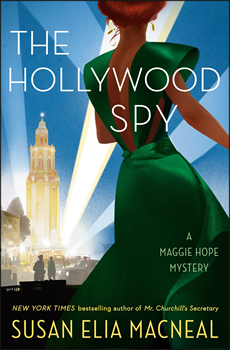 Susan Elia MacNeal is the author of the New York Times, Washington Post, Publishers Weekly, and USA Today-bestselling Maggie Hope mystery series, starting with the Edgar Award-nominated and Barry Award-winning Mr. Churchill’s Secretary, which is now in its 22nd printing.

In the latest installment of the series, THE HOLLYWOOD SPY, Maggie Hope is off to California to solve a crime that hits too close to home—and confront the very evil she thought she’d left behind in Europe.

The Big Thrill recently had the opportunity to talk to the former assistant editor at Viking Penguin to discuss the newest release in her World War II mystery series.

Thank you so much for chatting me with today about THE HOLLYWOOD SPY. I’m not new to mysteries, but I am new to your series. Would you tell me about Maggie Hope? Who is she? What inspired you to create her and place her in a mystery series? What drives her?

Maggie’s a young woman who grew up in the US but moved to London right before the start of World War II. She started out as Winston Churchill’s secretary, but her intelligence and fluency in math and code-breaking soon brings her to the attention of the spymasters of MI5 and the role of secret agent. I think of Maggie as “Nancy Drew meets James Bond.”

I remember reading about the Fatty Arbuckle mystery years ago and wondering what really happened. There was such a culture of covering up important people’s actions back then that to this day many mysteries are still unsolved. As you researched for this story, did you find any new-to-you information that really caught your interest? Or caused you to pause?

Absolutely. I was given a copy of Steven J. Ross’s nonfiction book, Hitler in Los Angeles, as I was working on my last novel. I was struck by how many pro-Nazi groups (America First, The Silver Shirts, The German American Bund, just for starters) there were in Southern California during the 1930s.

I was also amazed to find out that while the police and the FBI knew about the rise of Nazism, they ignored it—concentrating on the perceived Communist threat. So two real-life men, named Leon Lewis and Joseph Roos, American World War I veterans in Naval Intelligence, saw this oversight and stepped in.

They formed a spy organization to keep tabs on the American fascist groups. One relevant fact related to THE HOLLYWOOD SPY is that many of Lewis’s and Roos’s undercover agents died in mysterious circumstances. To this day, those cases have never been solved. My best guess? They were “made” and murdered by American Nazis.

The Golden Age of Hollywood is such an interesting time. So glossy and beautiful on the outside, but so tarnished and complicated underneath. One has only to read biographies and memoirs of the time period to know the optics from the era were so much smoke and mirrors. What did you find challenging about writing a mystery during this time?

It was challenging to balance the two sides of Los Angeles. To Maggie, especially coming from war-torn London, Southern California at first seems like paradise, with brightly colored flowers and sunshine, relatively little food rationing, buildings intact—not to mention movie stars. She’s bought into the myth that after Pearl Harbor Americans were all standing shoulder to shoulder in support of the war.

So as she learns more and becomes progressively wiser to what’s really going on, we see more of the dark noir-ish underbelly of the city. What also helps is the smog increasing in LA. Yes, it’s a metaphor, but July 1943 is the first recorded incident of smog in Los Angeles. (Some people thought it might be an enemy gas attack.)

As I began to read THE HOLLYWOOD SPY, I got Black Dahlia vibes when the murder was revealed. Did you base the murder on a real incident or was it completely made up for your story?

The opening is inspired by the image of the dead body of Joe Gillis floating in Norma Desmond’s swimming pool in the film Sunset Boulevard—you don’t really get much more classic Hollywood than that. But my character Gloria Hutton’s death has been ruled an accident, not a murder—that’s what Maggie Hope has to work through: Was it an accident, suicide, or something more sinister? And also, who would want her dead and why?

I worked with a friend who’s a doctor to plot the details of the forensic evidence Maggie would need to solve the mystery. I don’t want to give too much away, but I will reveal that whenever we talked about the death over email, we’d repeatedly state it was fictional and for a novel. In case the government was somehow reading our exchanges and thought we were actually planning something! (A fellow novelist who’s ex-CIA once informed me I was probably on a watch list for things I’ve looked up to research my books—including bombs and anthrax—so I feel like I should be extra careful…)

How did you complete your research for this book?

I was lucky enough to visit Los Angeles (a place I’ve been to quite a bit over the years) twice over the course of writing. I hung out with a bunch of friends, including novelist Kim Fay (we met when her book The Map of Lost Memories and my Mr. Churchill’s Secretary were nominated for the Edgar Award and we’ve stayed friends). Kim—bless her—drove me around to all the places I wanted to visit, including the legendary restaurant Musso & Frank’s, where we had martinis. All in the name of research, of course.

THE HOLLYWOOD SPY covers a tumultuous time in Hollywood where race relations are concerned. Perfectly timed for what is currently happening in our world. What do you think the takeaway should be for the reader as you explore race relations in this period?

Yes, the summer of 1943 had a number of race riots and protests—the Zoot Suit riot in Los Angeles, one in Detroit, one in Harlem, and a few others in Texas and Georgia. It was surreal—absolutely surreal—to be writing about that charged racial atmosphere of the US in the summer of 1943 in New York during the summer of 2020, after the murders of George Floyd and Brionna Taylor. History might not repeat itself, but it does rhyme, as the saying goes. The takeaway is there is nothing new under the sun, and America has long had serious issues with racism, fascism, and anti-Semitism, which continue both overtly and covertly to this day.

I read that you are currently working on a standalone. How is that process for you after working on a series for so long? And will you be returning to the Maggie Hope series?

Yes, working on a standalone novel, my first! What’s great is that the standalone is also set in Los Angeles, although a few years before the time of THE HOLLYWOOD SPY, so it’s familiar in some ways. But the characters are all so new. And there’s no pressure to write in any particular style—for instance I could do things in first person from multiple characters’ points of view. So that freedom is both exhilarating and intimidating.

What’s next for Maggie Hope?

In Maggie’s next adventure, she’ll be in charge and commandeering her own spy mission. She’s going back to Paris and then Madrid, to meet with an old foe—the Nazi agent (and fashion designer) Coco Chanel. Believe me, Maggie’s journey isn’t over yet!

Thank you, Susan for a behind-the-scenes look at THE HOLLYWOOD SPY. It is a fascinating look at an intriguing place during an interesting time.