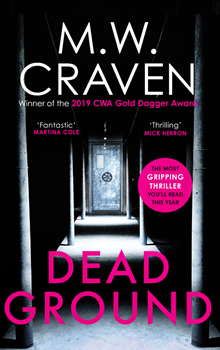 With DEAD GROUND, M.W. Craven brings us the latest in his Poe and Bradshaw thriller series.

While investigating a crime where nothing seems to make sense, DS Washington Poe must join the dots between a squalid killing in a brothel and a curious bank heist from three years in the past.

The Big Thrill recently caught up with the author to discuss this ongoing series and learn what this latest instalment has in store for readers.

Tell us about your main character, Washington Poe. What has his journey been like leading up to this story?

Washington Poe started the series (The Puppet Show) 18 months into a suspension after he made a mistake that led to the death of a suspect. He’s grumpy, misanthropic, and lives on his own (with his springer spaniel) in the middle of nowhere. His house is two miles from the nearest road and is only accessible on foot or by quad bike. He’s brought back from suspension into the National Crime Agency serial killer unit he used to lead after a killer carves Poe’s name into the chest of one of his victims. He teams up with Tilly Bradshaw, a young woman with a genius-level IQ but who has spent her entire life in academia. Despite not really knowing how to communicate with each other, the two eventually become firm friends, and it this that drives the series forward.

For the uninitiated, can you give us some background on the series as a whole, how it came about and what other books/stories have preceded this instalment?

The Poe and Bradshaw books are all set in my home county of Cumbria. It’s the most northern county in England, pressed right against the Scottish border. It’s the second largest county in the country but is also the most sparsely populated. In other words, it’s empty. Traditional police methods (interrogating CCTV, number plate cameras, information from mobile phone masts, etc.) don’t work there, so Poe is forced to come up with less-technical solutions.

The Puppet Show is the first book in the series, and it’s about the hunt for a serial killer burning people alive in the county’s myriad stone circles (we have 63, more than anywhere else in the UK). In 2019, it went on to win the Crime Writers’ Association Gold Dagger, which was obviously very exciting.

Black Summer was published the following year, and it’s an old case that comes back to haunt Poe this time. It’s about a murderous celebrity chef, and it poses the question: How can someone be both dead and alive at the same time? In 2020, Black Summer was longlisted for the CWA Gold Dagger.

The third book in the series is called The Curator, and it’s about a killer who anesthetizes his victims before removing their fingers. What starts out as a straightforward serial killer book quickly morphs into something far more sinister. The Curator was longlisted for this year’s CWA Gold Dagger, making it three for three for the series.

DEAD GROUND, the book out now, is a story about a man with a highly vetted job (although nothing checks out) who is murdered in a pop-up brothel, and how this links to a perfectly executed bank heist three years earlier, a heist where nothing was stolen . . .

The biggest challenge was the title, funnily enough. I wanted to call it The Thirteen Rat Theory. That was rejected for having rat in the title. I then offered The Bad Beat, and even wrote in an explanation for the term, but again that was rejected by sales.

Unusually for me, plot took shape first. I’d had the idea for DEAD GROUND for a few years, but my editor thought it was too much of a thriller when I pitched the idea. But when I merged it with another idea—an unsolved bank heist—it all slotted together seamlessly.

That crime books can have humor in them, without being comic crime.

The challenges are keeping the series fresh. Every book has to be approached as if you are writing it for a reader unfamiliar with the series and this means finding new ways of introducing Poe and Tilly, without alienating your long-term readers. Character growth is a must, I think, and this is one way to keep momentum in a series.

The rewards are similar to the challenges I think, but series writing also allows for a longer-term view to be taken. For example, I’ve seeded things in The Puppet Show (Book 1) that won’t be relevant until book 8. A series can have story and character arcs in a way that standalones simply can’t.

I think Lee Child said it best: Ask a question on the first page and don’t answer until the last.

M. W. Craven was born in Carlisle but grew up in Newcastle, returning after 31 years to take up a probation officer position in Whitehaven, eventually working his way up to chief officer grade. Sixteen years later he took the plunge, accepted redundancy, and became a full-time author. He now has entirely different motivations for trying to get inside the minds of criminals.

His first novel featuring Washington Poe and Tilly Bradshaw, The Puppet Show, was published by Constable to huge acclaim, and it has since won the CWA Gold Dagger Award and been shortlisted for the Amazon Publishing Readers’ Awards: Best Crime Novel, the Goldsboro Glass Bell Award, and the Dead Good Reader Awards.

M. W. Craven lives in Carlisle with his wife, Joanne. When he isn’t out with his springer spaniel or talking nonsense in the pub, he can usually be found at punk gigs and writing festivals up and down the country.