A Lifetime of Thrills 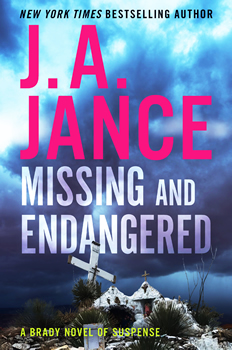 What’s special about J. A. Jance is she doesn’t just offer entertaining, compelling stories; she offers us entire lifetimes. With 65 books and four series to her name, Jance has penned whole histories for sleuths J. P. Beaumont, Joanna Brady, and Ali Reynolds, building each one’s timeline novel by novel (sometimes even intersecting). And the most fun part is that a reader can either get acquainted briefly by dipping into a novel here and there or, more appetizingly, jump into a full arc of struggles, losses, and triumphs by reading a series in order. As Jance’s imaginary people journey through their lives, so do we—intimately.

It’s an amazing feat that this tireless author has pulled off over a long and prolific career. As it turns out, in the creation of these lifetimes, Jance feels the same sort of affection for her characters as her readers do. “For me, starting each new book is like receiving that annual holiday letter from treasured friends that you seldom see in person,” she says. “It’s a way to find out what my characters have been up to since the last time I saw them.”

What Sheriff Joanna Brady has been up to lately is the makings of Jance’s latest novel, MISSING AND ENDANGERED. The story picks up about a year after Field of Bones left off. Joanna had just assisted in the investigation of a serial killer while on maternity leave. Now, back on the job with a baby at home and a busy author husband, her latest adventure launches with the bloody puzzle of one of her deputies, Ruiz, being shot during a domestic argument. That he may have killed the husband, to whom he was serving a no-contact order, muddies the situation even more. To top it all off, Joanna’s daughter’s friend goes missing. 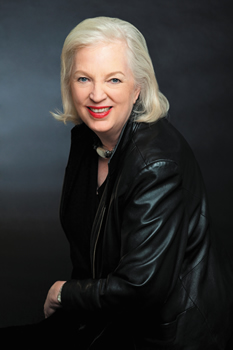 Some fans may remember Joanna’s first husband, Sheriff Andy Brady, was shot and killed in Desert Heat. Though this powerfully reminds longtime readers of the agony Joanna went through, Jance keeps new readers gripped by the question of whether Deputy Ruiz will make it through a critical surgery and live. It’s a delicate dance, to bring new readers up to date while still satisfying longtime fans—a dance Jance is well aware of. “As I start a book, I’m always walking a tightrope. I need to include enough background information to allow new readers to feel at home, while, at the same time, not boring longtime readers to tears.”

Jance certainly doesn’t do the latter. MISSING AND ENDANGERED pulls us through Joanna’s professional dilemma of solving a murder case while bringing us into the hectic schedule of mothering multiple kids, spanning from diapers to college. We see her struggle to care for baby Sage while preparing for Christmas and planning a retirement party. “Joanna, like most women, has to juggle the complexities of work and family,” Jance says, “so it’s important for me to put everyone in their proper time and place. In Field of Bones, Jenny was going off to college. Now she’s a sophomore, and this book has her front and center.”

In that front-and-center position, Jenny and her friend Beth deal with the issue of online sexual exploitation. It’s a somewhat recent phenomenon with the rise of smartphones and the dark web, but Jance’s portrayal is well informed and realistic.

“I’ve never been in law enforcement,” she says, “so as a writer of police procedurals there’s a lot I don’t know. I’ve long been a watcher of true-crime shows on TV. My introduction to what is called sextortion was on an episode of ID-Discovery’s show Web of Lies. In it a much older man, posing as a 16-year-old’s 20-something boyfriend, tricked her into sending him photos, which he later threatened to post online. The girl’s mother eventually learned what was going on and the guy was caught. Yay for the good guys!” 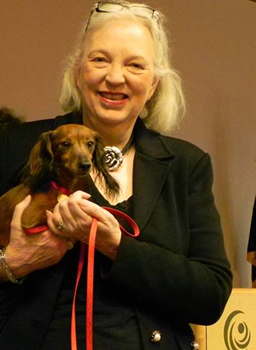 Jance with Bella, who was found abandoned and starving on the street. “She had been mistreated and was terrified of our male dog-sitter,” says Jance, “so when it came time to go on tour, she became Bella, the Book Tour Dog, and she was perfect at it. Her first day on tour in Phoenix, she interacted with 2500 people.”

That sense of hope often permeates Jance’s books, despite the angst and sadness that comes with crime fiction. We regularly see the close bonds of family and friendship across generations play out in her stories. “I grew up in Bisbee, Arizona,” she says, “back when the mines were still active and the town was a thriving community. I think my books are a reflection of the small-town values I learned back then.”

Still, Jance doesn’t sugarcoat the harsh realities of desert life: the rugged landscape with its unrelenting heat and its extreme poverty, especially among rural people. In MISSING AND ENDANGERED, young siblings Kendall and Peter struggle to survive despite their father’s death and mother’s severe neglect. Their bond makes readers ache with compassion. “In each book, usually one particular character wins my heart,” Jance says. “In Field of Bones, that character was Latisha. In MISSING AND ENDANGERED, the stand-out character was Kendall, whose watchfulness over her little brother during a terrible ordeal is nothing short of heroic.”

These are the truths of living in remote parts of the US, areas oftentimes ignored by business entrepreneurs and political leaders. Cochise County, which sits in the southeastern part of Arizona, is one such place. It’s packed with Western history and natural landscape wonders.

“I’ve used the Joanna Brady books to showcase the corner of Arizona where I grew up, the places my family visited on our Sunday-afternoon rides: Skeleton Canyon, the Wonderland of Rocks, Texas Canyon, Montezuma Pass. When Arizonans travel through the state, they mark where they are by the mountain ranges in view—the Huachuca Mountains, the Chiricahuas, the Peloncillos, the Rincons, the Catalinas, the Superstitions,” Jance says. “I think people who haven’t visited Arizona think it’s wall-to-wall saguaros. There are no saguaros in Cochise County, not in real life and not in my fiction either.” 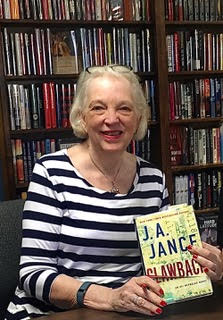 Jance at a signing for her 2016 Ali Reynolds thriller Clawback.

Saguaros or no saguaros, Jance’s stories go well beyond the dry, rocky landscapes of the desert. In fact, her J. P. Beaumont series is set in the wettest, lushest part of the country: Seattle. For years, she and her husband split their time between these two very different locales.

“When I moved to Seattle from Phoenix in the early ’80s, I was disturbed by all the green. It was July. I put on my Phoenix winter coat and wore it for a year. The following summer I started complaining about 80-degree ‘heat’ right along with everyone else. For more than 20 years we had a second home in Tucson. We sold it two years ago, and so we’ve been waiting out the pandemic in what is currently a very gloomy Seattle, but writing about the desert gives me a chance to send my mind and heart there for a visit.”

Her sole time in Seattle seems to have been productive. It sounds like we’ll be able to catch up with our favorite Northwest detective, J. P. Beaumont, sooner than we might expect. “When I started working on the next Ali [Reynolds] book, Unfinished Business,” she says, “I quickly realized that it involved a long supposedly-solved homicide with ties to both Arizona and Washington. Since J. P. Beaumont has turned to working cold cases in retirement, it made sense to call on him. Fortunately, my editor at HarperCollins was willing to let Beau make an appearance in a Simon and Schuster book, so look for him in that upcoming Ali book. However, I’m now at work on the next Beaumont book as well. I’m only 20 percent in, but the baby has a name: Nothing to Lose.” 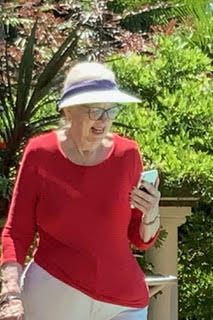 Jance gets her daily steps in.

In June of 2021, that upcoming Ali Reynolds book, Unfinished Business, will be released. When we last saw the former broadcaster turned private detective, she was trying to save an archbishop from a would-be assassin in Credible Threat. In this new novel, she’s entangled in real estate danger. “Ali, in her guise of property manager, is unwittingly dealing with a difficult, slow-pay tenant who happens to be a serial killer. At the same time, one of Ali’s husband’s former employees, Mateo Vega, who has just spent 16 years in prison for something he didn’t do, steps out of the past and into B.’s and Ali’s present, with, as I said above, a timely assist from J. P. Beaumont.”

Overall, Jance’s continued dedication to writing is impressive. One might expect an established author with so many bestselling books to slow down. Not in her case. She says what keeps her going is the fun of telling a new story and the rotation of past character friends.

“I could never have been a Sue Grafton and set out to write 26 books in a row about the same character,” she says. “Being able to move from one set of characters to another and placing them in different locales has helped me stay fresh. And for the record, I still maintain that being a writer is the best job in the world.”

Lucky for us she feels that way.