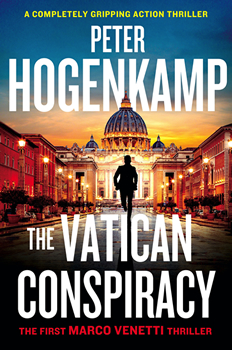 Father Marco Venetti is a Jesuit priest from Monterosso al Mare, shepherding over a quiet parish overlooking the Ligurian Sea. His biggest concerns—until the evening Concetta shows up in his confessional—are the empty pews in his 800-year-old church and the way he “stared at her creamy olive skin, done to perfection by the Mediterranean sun.”

Concetta is a fisherman with empty nets and a conscience brimming over with guilt, who reveals she is involved in a plot to assassinate the pope and attack the Vatican City. Marco urges her to go to the police, but her daughter is being held captive and she is unwilling; the seal of the confessional binds Marco, and he is unable. Seeing no other way to stop the attack on Pope John Paul III, the first Black pope in over two millennia, Marco steals aboard her fishing trawler toting his only weapon—a well-used spear gun.

The Big Thrill recently caught up with Hogenkamp to discuss his new page-turner, THE VATICAN CONSPIRACY.

Tell us about your main character, Father Marco Venetti. What has his journey been like up until now?

Marco is a Jesuit priest who comes from a long line of navy men on his father’s side of the family. He enlisted in the navy upon finishing secondary school—as did his older brother—but asked for a discharge after his salvage vessel was ambushed by pirates off the coast of Somalia. Marco was able to fend off the attack—and save the lives of his shipmates—by killing three of the pirates, earning the highest level of military honor for his heroics and bravery. But the events didn’t sit well with Marco’s conscience—inherited from his mother, who comes from a long line of faithful South Tyrolians—and he enters a Jesuit seminary after being honorably discharged from the navy.

Marco’s career as a priest has been likewise difficult. Shortly after being assigned to a lovely coastal parish in the famed Cinque Terre, he falls in love with Elena, the captain of an old fishing boat and single mother of a young daughter. The affair between Elena and Marco stretches on for several years, and ends only when Elena, tired of sharing Marco with God, moves away from the area. Elena was gone but not forgotten, returning to Marco often, especially at night, when the sound of her laughter returned with the sound of the waves breaking against the shore, keeping him up for hours.

The setting came first, and it came many years ago, when I travelled to the Cinque Terre for the first time in 1986. I knew right away there was a novel there, in the mountains erupting straight out of the Ligurian Sea, and in the citrus groves growing on the terraced slopes above the pink and blue buildings clustered together on the rocky shore. I will never forget the smell of the place, the nose-pleasing aroma of sea salt, caper blooms, and frying sardines. Its sound is just as memorable, the crashing of the breakers against the rocks, the continual arguing of the gulls, and the whisper of the wind through the olive trees. It was great fun to write this (UNESCO World Heritage Site) into the book.

I wanted THE VATICAN CONSPIRACY to be a very different kind of thriller, with a very different sort of protagonist. I chose a Jesuit priest for the role, providing me with both a huge challenge and a huge opportunity. We have all seen the disgruntled ex-FBI agent and the former Navy SEAL with a drinking problem in this role, and there is a reason for that, because it is a role which is natural to write. But it is not natural to thrust a peace-loving Jesuit priest into a world of violence and moral turpitude—but it makes for great reading.

The books I have always loved the most are the ones with the highest stakes. And I don’t mean the end of the world or some other cataclysm but the loss of a loved one, the loved one. A father trying to save his child or a woman trying to save the man she loves. This way, not only are the stakes high, but it’s personal as well, much more than the end of the world could ever be. It has to be personal for the characters, because when they care—really deep-down care—so will the reader.

I don’t believe there are any other thrillers that feature a Jesuit priest in the alpha role. The reason I wanted to do this was the visceral tension created by a man of peace forced to wield a gun, a celibate man tempted by sexual desire. I can remember writing the first chapter, way back in 2009, my breath sticking in my throat, my fingers tingling with electricity. I knew then that I had something special, and I am so excited to hear what you think.

I decided to make my main character a priest very purposefully. For one, it’s something new, and quite a bit different than the jaded FBI agent or hardened police detective that often fill this role. But there was another reason as well. In my first (admittedly mediocre) attempt to write a novel, I struggled with creating enough organic conflict to drive the manuscript forward. When I sat down to write the next one, I was adamant I would find an emcee and a plot that oozed tension. And that’s when it occurred to me to start the book the way I did, with Elena coming back into Marco’s life (after leaving a few years ago) ostensibly to make her confession but in reality, to get Father Marco to help her out of the jam she has created. When I typed that scene, my breath stuck in my throat and my chest tightened with the tenseness of it, and I knew I had something special.

He can be found on his author website, as well as his personal blog, PeterHogenkampWrites,  where he writes about most anything. He is the founder and editor of The Book Stops Here, a literary blog for readers and writers written by authors, agents, editors, publishers, and poets. Peter is the creator, producer, and host of Your Health Matters, a health information program, which airs on cable television, streams on YouTube and sounds off on podcast. Peter was a finalist for the prestigious 2019 Killer Nashville Claymore Award as well as a top finalist for the 2020 Vermont Writer’s Prize. He tweets—against the wishes of his wife, four children, and feisty Cairn Terrier, Hermione—at @phogenkampvt. He can be reached at his Facebook page and at peterhogenkampbooks@gmail.com.